United in celebration: Faithful commemorate second anniversary of the dedication of Holy Name of Jesus Cathedral 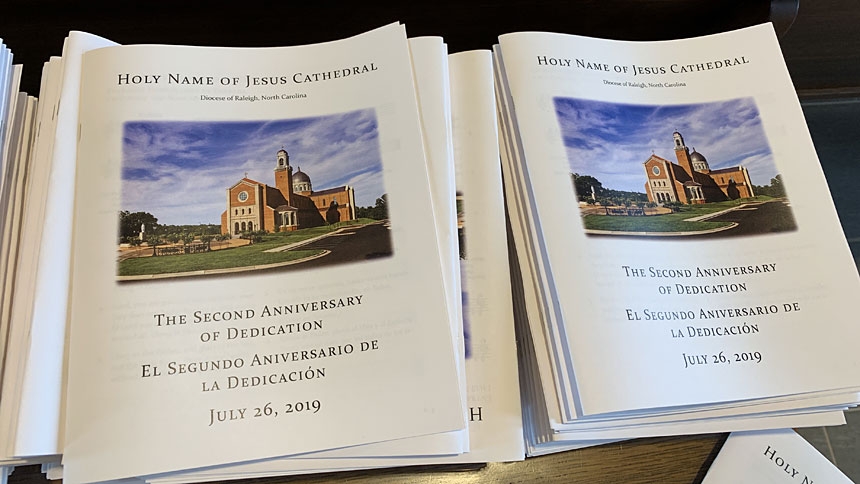 On July 26, the Diocese of Raleigh celebrated the second anniversary of the dedication of Holy Name of Jesus Cathedral.

Monsignor David Brockman, rector of Holy Name of Jesus Cathedral, was principal celebrant for the Mass, and Monsignor Gerald Lewis served as homilist.

“This evening we are gathered in the house of the Lord; this house built by faithful and generous people from every parish in the Diocese of Raleigh,” Monsignor Lewis said. “This house of the Lord is as much the cathedral of Kitty Hawk, or Southport, or Ahoskie, or Rocky Mount, of Burlington or Siler City. Yes, it is the cathedral for Raleigh, and it is the home for all.”

He described how that kind of unity, the kind that is represented by a cathedral, is the kind of unity we need in our world today.

Noting strife in the world, Monsignor Lewis asked each person to turn to Jesus and light a candle in the darkness, and thereby protect the unborn, care for the immigrant and those in need.

“My friends, a world of truly dedicated Christians can change the world,” he assured.

The theme of unity played strongly throughout the Mass.

The program was bilingual with readings, the Gospel and prayers printed in English and Spanish.

At the altar, Monsignor Brockman invited Monsignors Jeffrey Ingham, Michael Shugrue and John Wall to each lead part of the Eucharistic prayer. And in the choir loft, 30 choristers and a brass quartet joined the Opus 147 to create rich and reverberating melodies for praise and worship.

Meriel Brodie served as a Eucharistic Minister for the Mass and is a member of cathedral parish. She was present at the dedication Mass and enjoyed commemorating the anniversary. She was especially moved by Monsignor Lewis’ homily.

“It was right on. It was what we needed to hear,” she said.

In his closing remarks, Monsignor Brockman thanked the congregation, his brother priests, and director of music, Michael Accurso. He also thanked the Living Faith Committee for hosting what he called a “bodacious” reception that evening on cathedral’s grounds.

As people walked out the cathedral’s doors, they were greeted with refreshments under a perfect summer sky. Painted in pigments of orange, pink, purple and blue, the sky became one more symbol of how the unity of many can create a powerful and beautiful light.

“We can never cease to give thanks,” Monsignor Brockman said at the reception. “We celebrate tonight in a very special way in this place that was designed so that the whole family can come together … Unity is so beautiful, and you can see it here.” 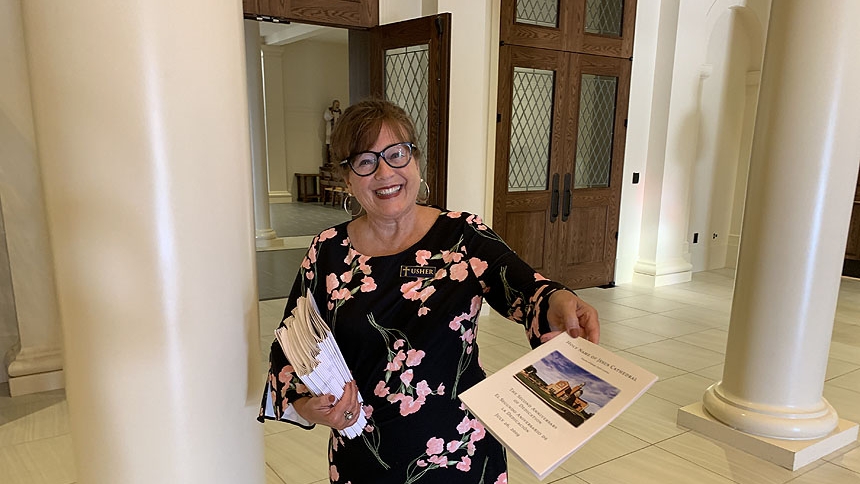 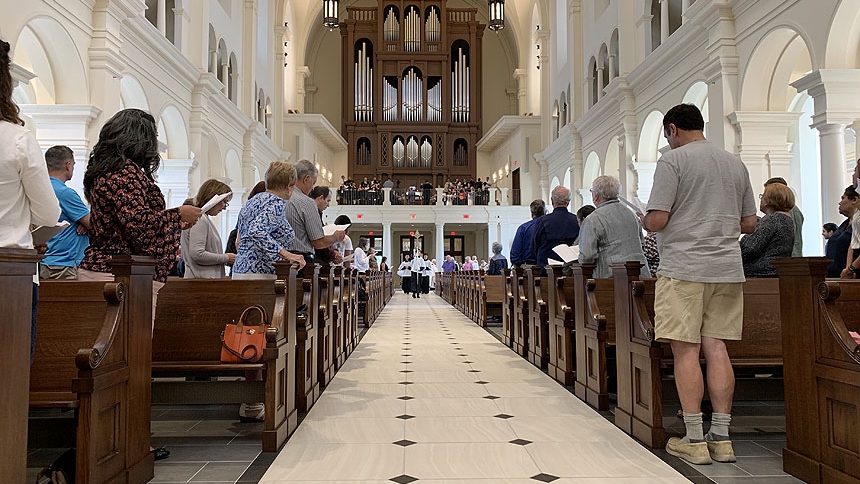 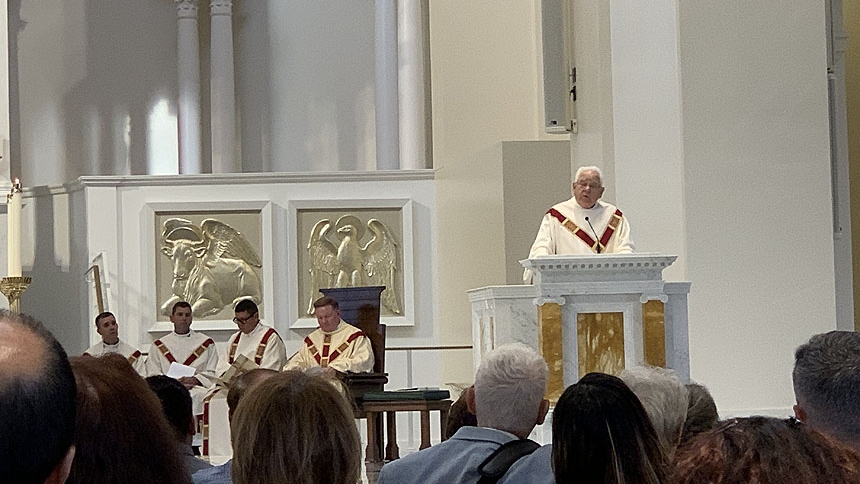 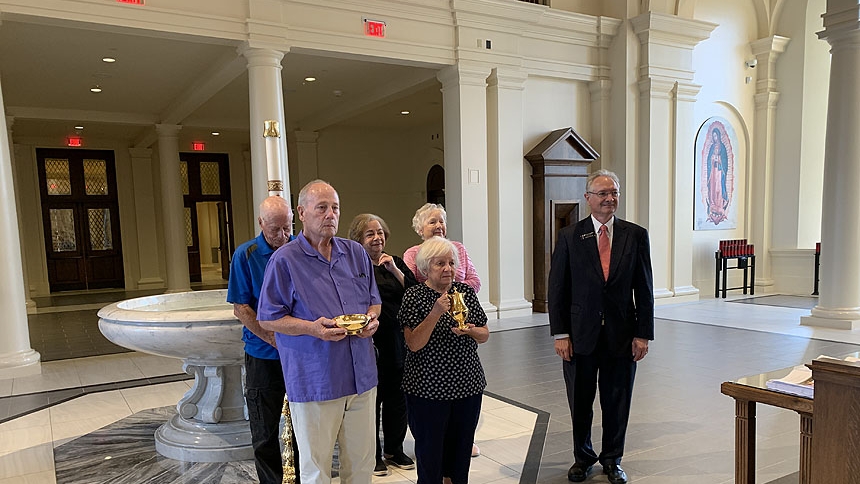 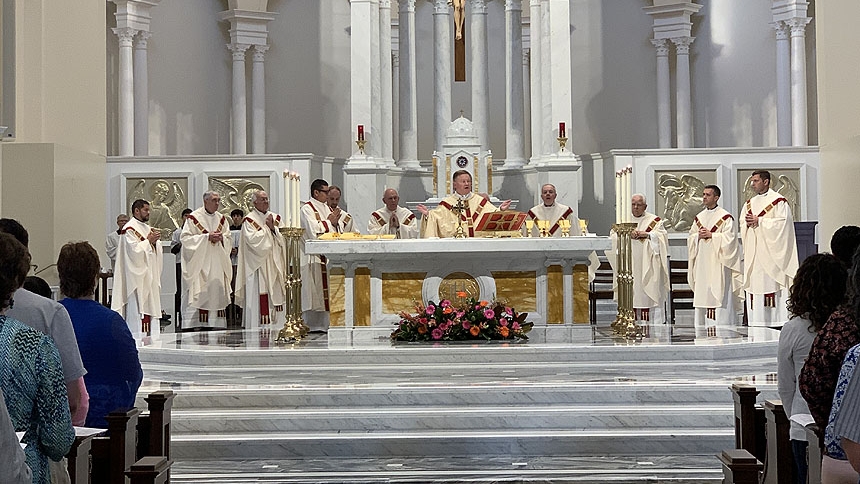 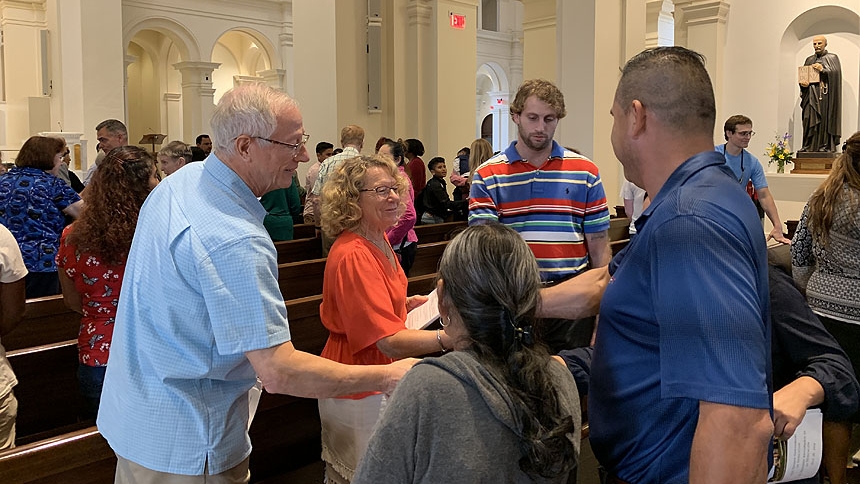 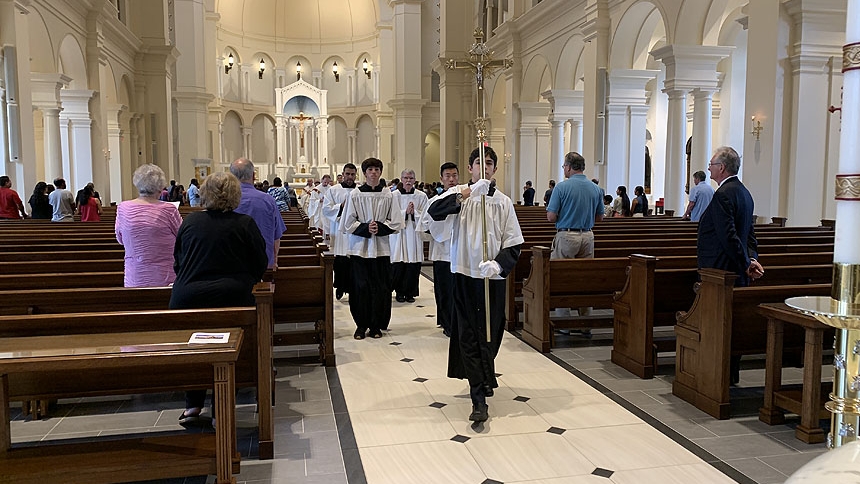 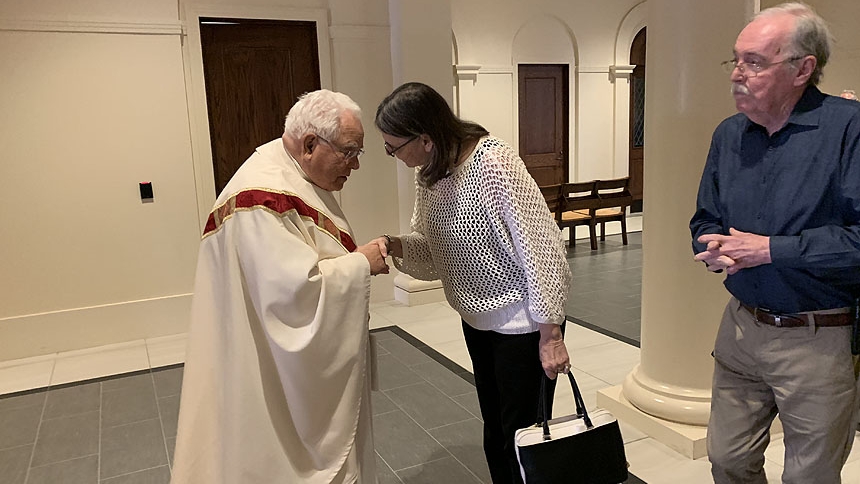 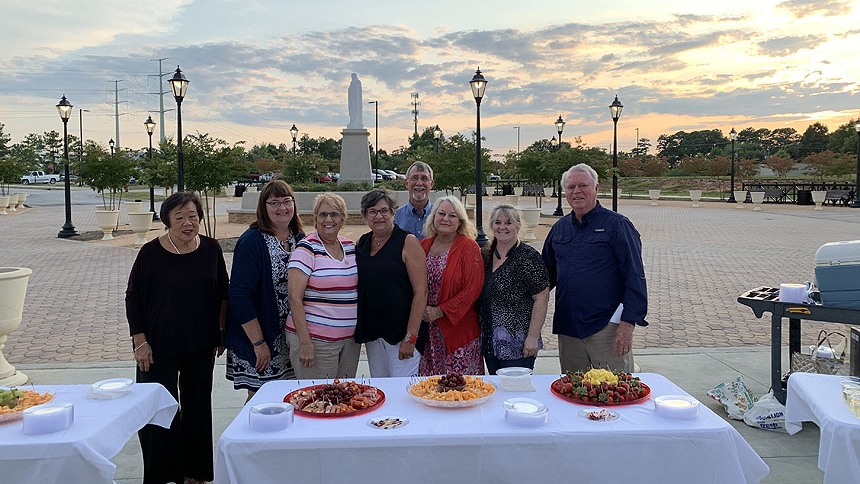 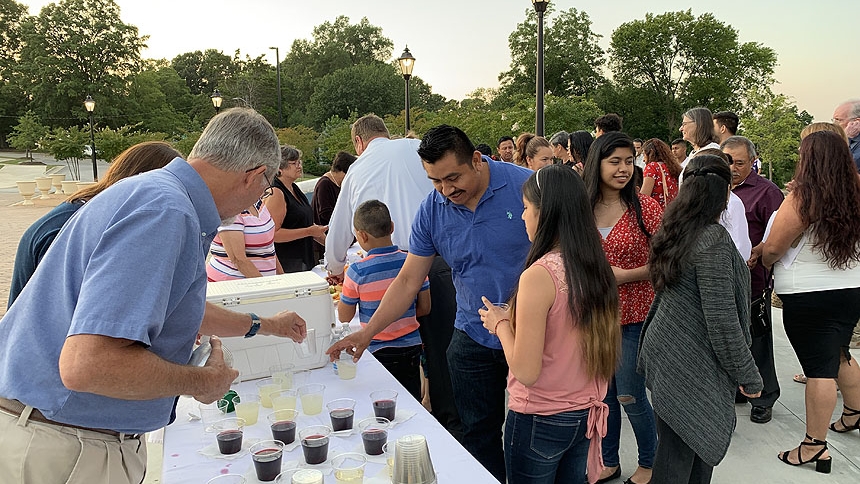 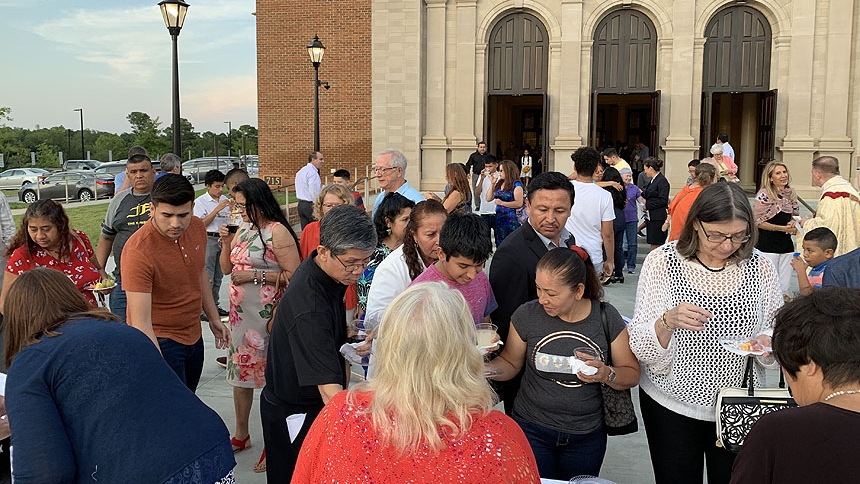 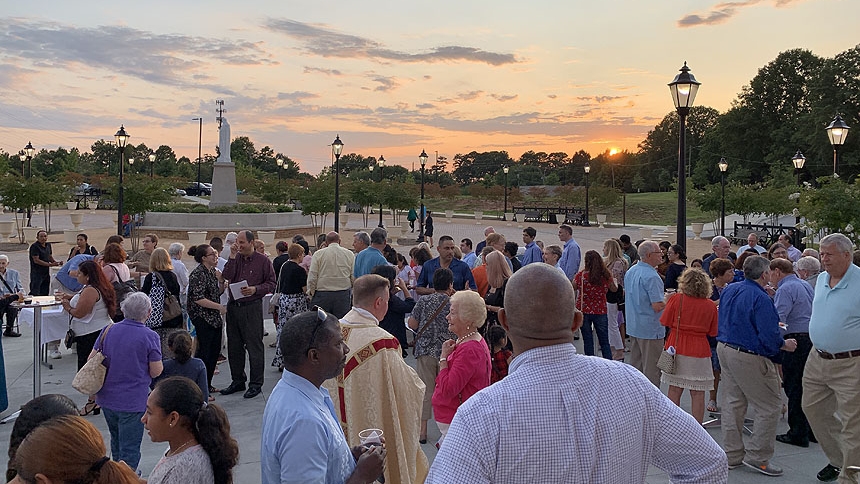 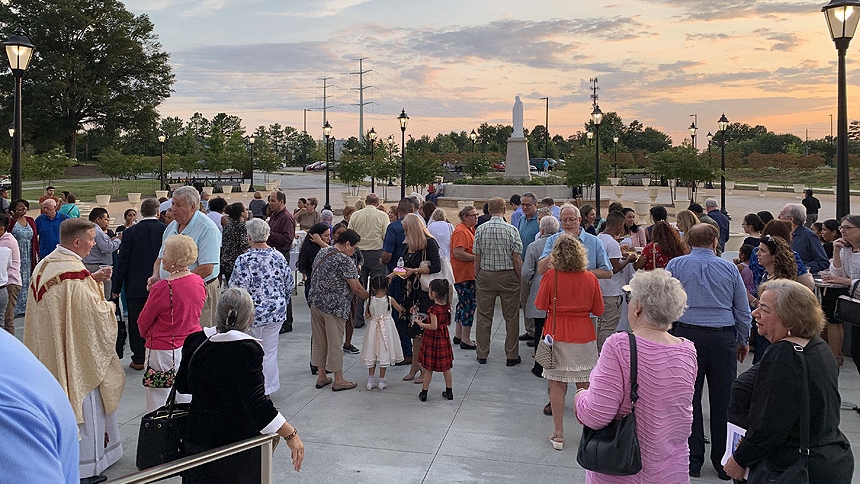 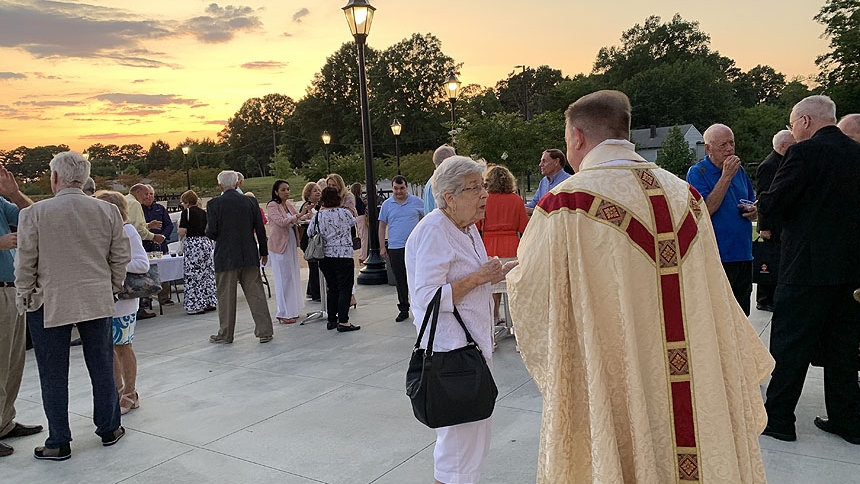