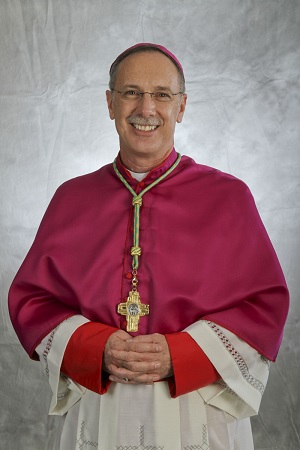 On July 5, 2017, it was announced in Rome that our Holy Father Pope Francis appointed Bishop Luis Rafael Zarama, an auxiliary bishop of the Archdiocese of Atlanta, to serve as the 6th bishop of the Diocese of Raleigh. He was installed August 29, 2017, at Holy Name of Jesus Cathedral.

Bishop Zarama was ordained to the Roman Catholic Priesthood for the Archdiocese of Atlanta on November 27, 1993. His first assignment was as parochial vicar at Sacred Heart of Jesus Catholic Church in Atlanta. He served as a member of the Vocations Committee. Bishop Zarama was the first Hispanic priest to be named pastor in the Archdiocese of Atlanta to St. Mark Catholic Church in Clarksville, Georgia, and St. Helena Mission in Clayton Georgia. He was a board member of Habitat for Humanity in Habersham County in 2005. Bishop Zarama was named Vicar General of the Archdiocese in April of 2006. He was named Chaplain of His Holiness with the title of monsignor by Pope Benedict XVI on March 7, 2007.  In 2008 he was appointed to serve as the Judicial Vicar for the Archdiocese’s Metropolitan Tribunal as well.

On July 27, 2009, His Holiness Pope Benedict XVI named him as Titular Bishop of Bararus and Auxiliary Bishop of the Archdiocese of Atlanta. He was ordained to the Episcopacy on September 29, 2009. He remained Vicar General and Judicial Vicar of the Archdiocese.

In 2012, he was asked to be part of the task force against human trafficking established by Pope Francis called The Santa Marta Group; the group meets every year, gathering Bishops and security leaders from around the world. He currently serves as a member of the Migration Committee of the USCCB.

On July 5, 2017, Pope Francis appointed Zarama Bishop of the Diocese of Raleigh. He was installed as Bishop of Raleigh on August 29, 2017, at Holy Name of Jesus Cathedral in Raleigh.