Well-wisher: 'It Doesn’t Happen Every Day!' Bishop ordains two priests for the Diocese of Raleigh 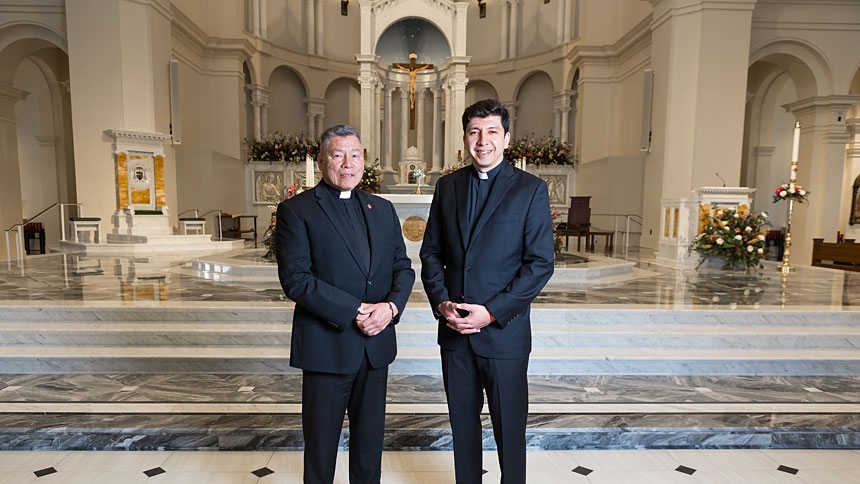 As far as sunny weekend weather goes, June 8 was forecasted to be a disappointment.

It was cloudy and overcast as Deacons David Miller and Noe Ramirez de Paz arrived at Raleigh’s Holy Name of Jesus Cathedral to receive the sacrament of holy orders and become priests.

Bishop Luis Rafael Zarama, principal celebrant for the Mass, took an opportunity to note the weather.

Sitting in the front pews, the candidates listened as he told them that no matter what storms arise, the job of a priest is to preach that “behind clouds there is hope. There is Jesus.”

The bishop asked them to minister and hear confessions with hope and kindness.

“They are not coming to you. They are coming, looking for Jesus through you,” he said.

Bishop Luis Rafael also noted that this was a special day for him because Father Miller and Father Ramirez were the first two priests that he ordained first as deacons, and then as priests.

“The whole enchilada,” the bishop said with a smile as the congregation laughed in appreciation.

Father Bob Kus, a retired priest of the Diocese of Raleigh, traveled from Honduras, where he is doing mission work. He was Miller’s parish priest at the Basilica Shrine of Saint Mary in Wilmington when Miller was discerning his call to a vocation.

“This is a totally special day,” Father Kus said. “[David] is going to be an extremely good priest. He has great life experiences; he understands people and is totally compassionate. He has a great sense of humor and is down to earth. There is nothing phony about him. What you see is what you get.”

The Mass was bilingual, with readings and prayers in English and Spanish. Bishop Luis Rafael, when performing the rites of ordination, spoke in English for Father Miller and in Spanish for Father Ramirez.

Father Ramirez’s parents, who traveled from Mexico, listened intently as the candidates made the promises of the elect and the bishop prayed the Prayer of Ordination.

“I am very happy that God gave me the opportunity to have this blessing.” Father Ramirez’s mother, Osvelia De Paz, said, through an interpreter. When asked which traits would help her son in his priesthood, she said, “He has perseverance in prayer. He prays all the time.”

Abbey Flores, a teacher at St. John Paul II Catholic School and friend of the Ramirez family for more than 10 years, traveled from Southern Pines for the occasion.

“It brings me great joy. I’m without any other words but joyful. It’s a moment of pride for our Hispanic community that is so very close-knit,” Flores said.

When asked about Father Ramirez, she said he’s extremely humble and caring. She added, with jocularity, “He’s a character. He’s got great comic timing.”

Anika Selleck, a third-grade student at Jacksonville’s Infant of Prague Catholic School, convinced her parents to drive two hours and bring the whole family of six to the ordination.

“Well, it doesn’t happen every day!” Anika insisted, lifting her arms as though embracing the cathedral to accentuate her point.

While she was in second grade, she prayed for [then] seminarian David Miller.

After most people filed out of the cathedral to enjoy the sun, which had just begun to shine, the Sellecks waited behind.

Anika wanted to meet the newly-ordained Father Miller. She approached him shyly at first, but as Father Miller smiled and bent low to hear her, she said, “I’m Anika! In my class, I prayed for you!”

Father Miller beamed at her and thanked her warmly, confirming to her that her prayers absolutely helped him.

Learn more about Father Miller and Father Ramirez in the latest issue of NC Catholics.