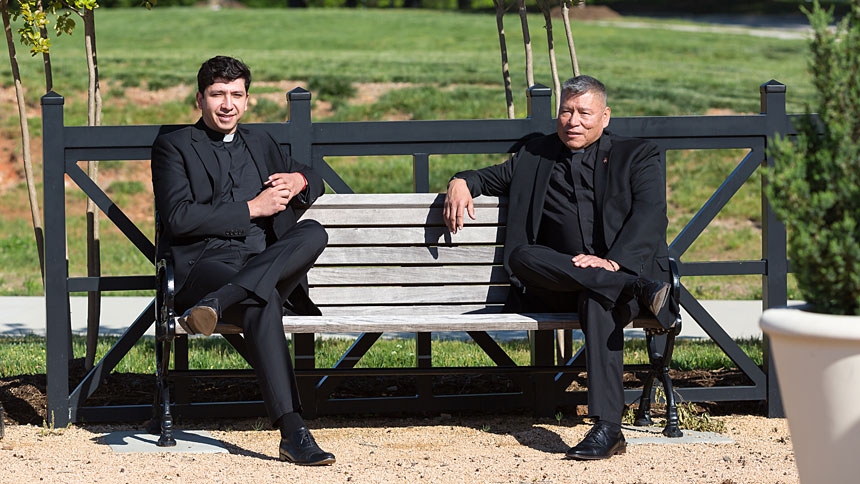 It’s two hours before Mass at cathedral. Deacons David Miller and Noe Ramirez de Paz are the masters of ceremony for the celebration, which means they will coordinate all those – from cantors to readers – who assist at the Mass. They’ll sit to the right and the left of the bishop, and be ready to serve.

But before they begin to prep for Mass, they have an appointment with NC Catholics.

They talk about their lives, and pose for photographs. It’s all part of an effort to introduce them to the parishioners of the diocese, whom they will serve when they are ordained priests June 8.

A lighthearted question about haircuts is asked. Deacon Ramirez, 26, runs his hand through his hair, shuffles his feet and acknowledges that he hasn’t gotten one recently. Deacon Miller, 59, obviously has a fresh cut. They both smile.

Their backgrounds are as different as their hairstyles.

Deacon Ramirez, who goes by Noe, was born in Luvianos, a small town in the southwest region of the state of Mexico, and raised in Robbins, North Carolina. Deacon Miller, whose friends call him Dave, was born in Tahlequah, Oklahoma, and raised nearby in Tulsa and Eufaula.

David Miller retired from military, and found a new faith and vocation

When he was about 11 or 12, Dave Miller used to walk to Catholic churches on Sundays. He didn’t really understand what was happening in there, but he did know it was different from the Protestant churches where his grandfather served as a reverend.

“There is one thing I can say with certainty,” he says today as he prepares to become a Catholic priest. “It was the Eucharist that drew me in.”

Growing up, he was the seventh of eight children of Lloyd Miller and Ardena Walker Miller. He played basketball and ran track. After high school, he enlisted in the U.S. Army. He studied interdisciplinary studies and completed his undergraduate degree, and later, after 30 years of active duty, retired from the military, he says.

“I then formed my own company and became a Department of Defense contractor,” Miller says, adding that his path to discernment to the priesthood was a slow one.

He became Catholic in 2008, and credits Father Willard Rucinski, O.S.F.S., who was pastor at St. Elizabeth Ann Seton Parish in Fayetteville, with his conversion.

After that, he said he heard God’s call for six years before he was ready to discuss it seriously.

When it was time for that, he turned to Father Bob Kus, his parish priest at the Basilica Shrine of St. Mary in Wilmington. Miller then met Father Ned Shlesinger, who was director of vocations for the Diocese of Raleigh at the time.

By the fall of 2014, he was a student at what’s now known as Pope St. John XXIII National Seminary in Boston, a seminary for students 39 and older.

Now that he’s close to priestly ordination, he says he’s looking forward to serving all of God’s people and to the moment when the bishop will ordain him.

It seems, too, that he will carry much of his military training with him. He still wears his wrist watch upside down, a practical method he learned in Special Forces. And he carries several white collars in his jacket … just in case the one he’s wearing is lost.

“I have a missionary heart for all and a special place for all those who have served or will serve in the military,” he says. “I believe my father and grandfather gave me a solid foundation for becoming a Catholic priest.”

When it comes time for his June 8 ordination and first Mass as a priest, he’s prepared to share the occasions with some of those closest to him.

Father Cory Bassett-Terrill, a seminary classmate from Boston, will serve as master of ceremonies during Miller's first Mass of thanksgiving. And two former seminarian classmates, Fathers Chris Koehn and Mike Coveyou, now ordained priests for the diocese, will concelebrate that Mass with him, while a third – Father James Magee – will be homilist. (It’s traditional for another priest to share a homily during a new priest’s first Mass as principal celebrant.)

“My first Mass of thanksgiving will be June 9 at St. Catherine of Siena in Wake Forest at 10:45 a.m.,” he says. “I spent the summer of 2018 as a transitional deacon there and enjoyed serving the parish members while learning from them and the staff.”

When asked if there was anything else he’d like for people to know, Miller focused on prayers for vocations.

“The Church, more than ever, needs future priests to answer the call,” he says.

Noe Ramirez likes to laugh. He’s quick to see what’s funny about a situation, and doesn’t mind to point it out, even if it’s at his own expense. Take his diocesan lapel pin. He misplaced it. And, he will tell you, he’s not about to ask the director of vocations for a new one. Instead, maybe he will ask someone in the office about replacing it. Maybe not.

Ramirez likes to smile, and make others feel comfortable. It’s a trait he picked up during his teen years in Robbins, where he worked in a restaurant waiting tables and working the cash register.

He learned hospitality there, he says.

Because it was a small town, everyone knew everyone, and when guests came in he was quick to ask specific questions such as, “How was your baseball game?” rather than simply ask how guests were doing.

Ramirez, who is the third of four children, went to public school and played soccer, tennis and basketball. He enjoyed watching major league baseball, especially the Boston Red Sox. He assisted at Mass, as an altar server, at St. Juan Diego Catholic Mission.

After graduating from North Moore High School, he considered going to Belmont Abbey College, but ultimately decided to move back to the country he was born in, Mexico, and attend Seminario Hispano de Santa María de Guadalupe.

“I thought I was being adventurous at first. Being away from home. Having a new start. Something totally different,” he says.

But the transition was hard, especially during the first few months. Seeing his maternal grandparents for the first time in 16 years helped change things for him, and soon he felt love for Mexico again.

“We met at the Basilica Shrine of Our Lady of Guadalupe. I recognized them right away … and it was joy filled. It was beautiful. There were tears and hugs and kisses,” he says today, remembering the event. “I spent time with them at Christmas break, Easter break and over the summer.”

After two years, he returned to the United States and transferred to St. Charles Borromeo Seminary near Philadelphia.

During his time in seminary, he says he discerned and contemplated “a decision between two goods.” It was difficult, says Ramirez, who once thought to study architecture or interior design.

“It wasn’t a comparison between design school and seminary, though,” he says. “But more of a comparison  between the priesthood and married life,” a vocation he first witnessed through the example of his parents Israel and Osvelia.

Throughout his discernment he recalled the words of a spiritual director. “He said, ‘God has always been faithful to us, and you can be faithful to him in your priesthood,’” Ramirez says.

Father Acosta will assist Ramirez at the ordination Mass with vesting.

“He saw something in me that I didn’t. He was patient … and always there to give me support and courage. It was remarkable how I was going through something difficult, and I’d get a phone call, and we’d talk about things. He’d give me words of perseverance and I’d carry on. Not to mention he’d take me out for a good dinner every now and then,” Ramirez laughs.

When asked what he’s most looking forward to about being a priest, Ramirez answered that it’s sharing God’s mercy through the sacrament of reconciliation and bringing people closer to God in the Eucharist.

He will celebrate two Masses of Thanksgiving following his ordination. The first will be in English at 5 p.m. at Sacred Heart Church in Pinehurst.

“Sacred Heart is the mother church of the mission where I grew up, and the people there have always been supportive. I feel like I am a fruit of their generosity. The only way I feel to say thank you is to offer a Mass there,” he says.

A second Mass will be offered in Spanish the next day at St. Juan Diego Mission in Robbins at 12 noon.

To learn about their ordination experience and first few days as priests, watch this video created after the event: 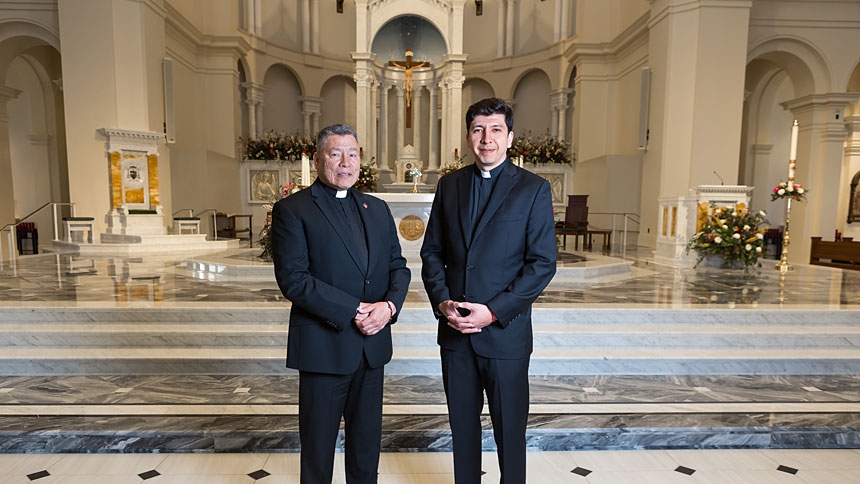 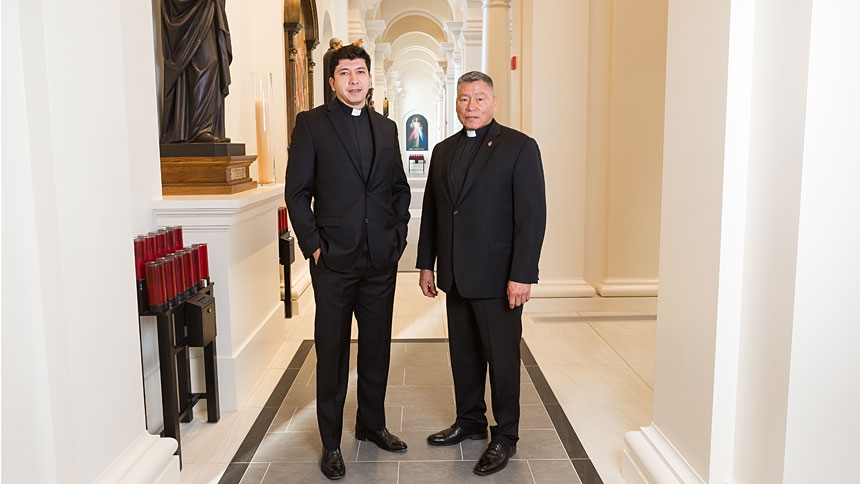