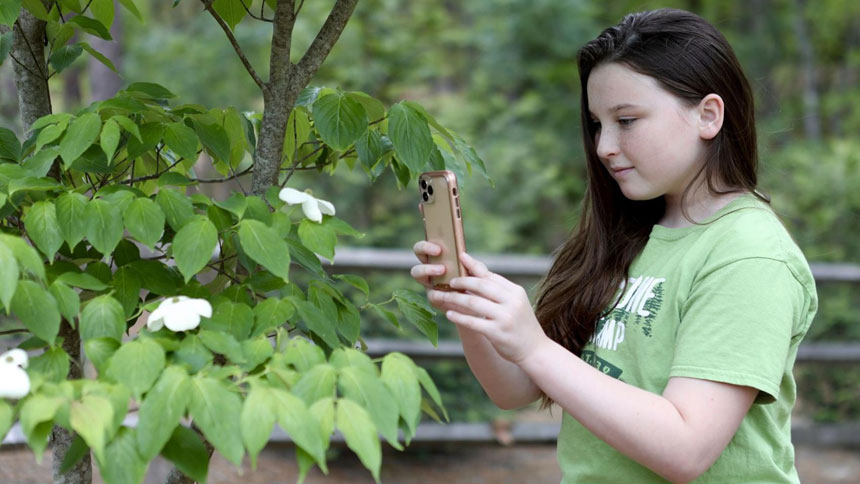 Above: Kate Brower uses her phone to take photos of flowers near her home to submit through the iNaturalist app for a schoolwide biodiversity project.

Social studies can be a hard subject to put into practice with restrictions related to the coronavirus pandemic in place.

But at St. John Paul II Catholic School, sixth grade teacher Lori D’Argenio has branched out to science and technology to keep her students learning about the world around them. Her class has spent the past few weeks organizing a campus-wide effort to investigate the outdoors and document local plants and wildlife.

Throughout the year, students at St. John Paul have been working on inquiry-based projects. Before on-campus classes were suspended in March, the school was planning to create a wildlife habitat around a water retention pond – and to install a webcam to observe it in real time from inside the school. School volunteer Bob Biamonte, a retired IBM engineer, is assisting with the application for a grant to fund the needed equipment.

“We were planning on trying to get more plants in there to try to attract wildlife and have feeding stations and a webcam so we could watch from all the classrooms,” said sixth-grader Kate Brower.

That project may be delayed for now. But D’Argenio, who has been pursuing continuing education through a National Geographic program for teachers, has had her students integrate nature and technology in a manner that’s allowed their project to carry on despite physical separation. The National Geographic “BioBlitz” is designed to compile a snapshot of a community’s biodiversity.

“We are trying to make our habitat out in the retention pond happen, so we want kids to be aware before we just put it there,” said Juliana Sawicki. “They can be a lot more observant once they know what’s around them.”

Using the iNaturalist application, school students and staff have been uploading photos of everything from bluebirds to blue toadflax as they find it in their backyards.

The exercise is proving that, though they may be separated for the rest of the school year, students and teachers are still very much in the same community.

“What we’re observing mostly in Moore County is that there are a lot of pine trees,” Juliana noted. “If you were to go up in the mountains or the beach you would see different animals, and where we’re reporting it’s all kind of the same.”

If students don’t yet know a longleaf from a loblolly though, the app will automatically try to identify the species pictured.

So far, about 400 observations covering more than 200 species have been submitted in the BioBlitz. About 80 people have chimed in to help identify the flora and fauna in the submitted photos.

“People are actually getting outside and learning more about nature and getting closer to it than before,” said Tay Tranel. “I learned most of the plants in my yard and I didn’t know any of them until a week ago.”

After loading a photo of a bee through the iNaturalist app, Meghan Kane took her best guess at identifying it only to be corrected by another student. Now that she’s spending even more time than usual on her bicycle, Meghan said she’s beginning to pay closer attention to small details like leaf shapes.

“I didn't know there were subspecies of roses or azaleas or hollies … which is interesting to see because there is a big difference between them,” she said.

“I live in a very forested area and I go on bike rides a lot … it makes me look around differently when I don’t just see a tree but a maple tree. I was biking the other day and I even stopped because I heard a different chirp from what I had ever heard.”

Submitting their findings for the BioBlitz and considering how their findings might be different if they lived in Raleigh or in California has gotten students thinking about how people affect the environment around them.

Struggling to capture the perfect image of an insect or bird that couldn’t be less interested in documentation has also led them to consider their own everyday interactions with nature.

“When I try to go outside and take a picture of a bird, the second you take a step out the door it’s halfway across your neighbor's yard,” said Juliana.

“You have to be respectful of the animal’s personal space or else it will run and you won’t even be able to get a picture of it,” Kate added.

Once the BioBlitz is complete, students will have mapped out a sampling of the plants and wildlife that call Moore County home that will then help them design the St. John Paul school wildlife habitat.

“Originally we were going to run it for 10 days to see how it went, but everyone is getting excited about being outside and wanting to observe,” said Kate. 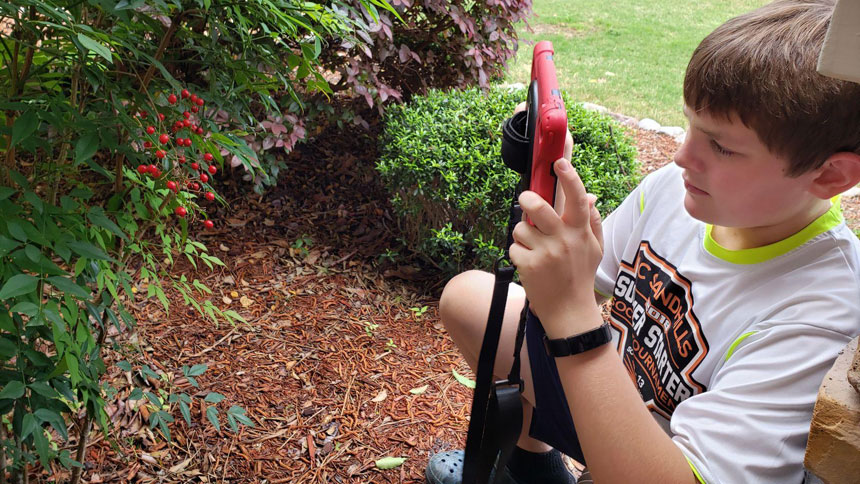 Above: Tay Tranel, a sixth grade student at St. John Paul II Catholic School, photographs a photo of berries near his home to upload to the school's National Geographic BioBlitz.

Published with permission from ThePilot.com.