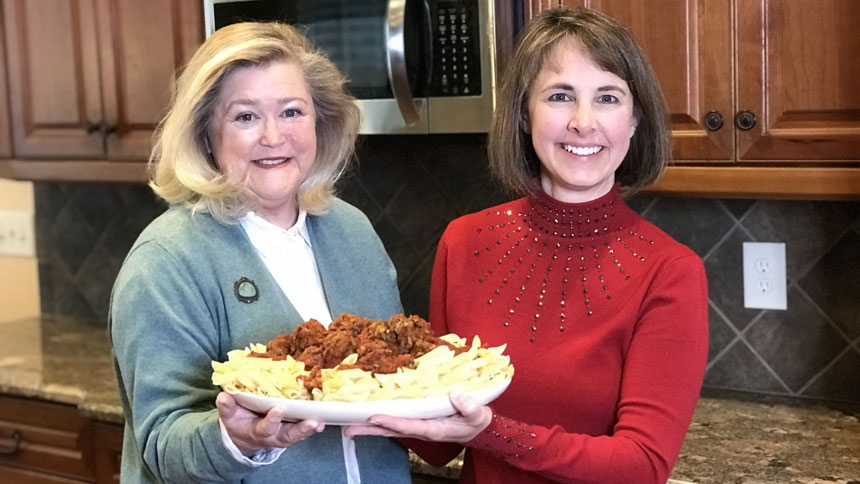 In his second encyclical, Laudato Si’, Pope Francis calls attention to our responsibility as Catholics to care for the environment. It reads, in part:

We have forgotten that we ourselves are dust of the Earth (cf. Gen 2:7); our very bodies are made up of her elements, we breathe her air and we receive life and refreshment from her waters.

The letter describes that while pollution, waste and climate change affect us all, they disproportionately affect the poorest and most vulnerable populations in the world. It adds that followers of Christ must not turn a blind eye to that fact.

It was a message that touched St. Luke the Evangelist parishioner Rosemary Herhold She felt called to learn more.

She researched data from the World Bank and read how Catholic Relief Services responded to crisis throughout the world. The more she learned, the more she felt compelled to act.

“I felt really sad, my heart just went out to the poor when I learned they were being so affected by the climate crisis,” she said, just before noting a personal connection. “I have about ten children that I support overseas through an organization, and some of them are feeling the effects.”

After countless hours of research and prayer, Herhold formulated an idea that would tie together Catholic teaching and tradition and positively impact the environment. She found a partner and teammate in fellow parishioner Jennifer McKinney. They, with the support of then St. Luke pastor, Father Rob Staley, launched Greener Lent for their parish in 2020.

What is Greener Lent?

Greener Lent is a program that takes the Lenten traditions of fasting, abstinence and prayer and focuses them in order to positively impact those most vulnerable to climate change.

Program participants are asked to not only consider abstaining from meat on Fridays and Ash Wednesday, but to be more mindful of their meat consumption throughout the season.

McKinney said that Herhold not only learned coding in order to create the website, but she also worked to ensure this could be a program anyone could do.

In her research, Herhold found that beef and lamb are the least climate friendly foods. Her goal became to create something that could have a big impact, while being mindful that everyone has different dietary needs and desires. She created three programs: Good Samaritan, John the Baptist and Mary, Mother of God.

Each program, outlined in detail at the Greener Lent website, has specific guidelines surrounding the amount of beef and meat consumed throughout Lent. Participants decide which program is right for them and can sign up directly on the site. From there, they can choose whether to receive weekly emails, which include recipe ideas and encouragement. The weekly emails also inform the participant about how much their sacrifice has saved in greenhouse gases, specifically carbon dioxide equivalents.

According to their website, 78 people participated in Greener Lent in 2020 and cumulatively saved an equivalent of over 660 gallons of gas.

In addition to the positive impact that the sacrifice has on people’s faith and on the environment, this program allows for participants to come together for a purpose.

“It felt like this was part of a community instead of me selecting to fast on items as an individual,” said Tom Reina, who participated in the inaugural year and will participate again this year.

Herhold and McKinney hope to expand the efforts outside of St. Luke parish and to triple the number of participants.

“If we can get 240 people praying and fasting and abstaining, we could do a lot,” Herhold said.

Deacon Josh Klickman, coordinator of the Human Life and Dignity ministry for the Diocese of Raleigh, has helped McKinney and Herhold expand the program. This year, parishes are invited to have a Greener Lent representative who can help with parish participation and answer questions. That representative’s contact information will be displayed on the Greener Lent website and that parish’s specific carbon dioxide equivalent reduction will be tracked.

As of Feb. 1, eight parishes have official representatives. It is a number that Herhold and McKinney hope will increase as bulletin and Mass announcements are made prior to Lent beginning Feb. 17.

With or without a parish representative, individuals can sign up on the website: greenerlent.org. There, users may also find educational videos, answers to frequently asked questions, recipes and a graph showing the amount of cumulative greenhouse gases saved.

While some have assumed that this program has political implications, Herhold confirms that faith, not politics, led the way.

She said, “It’s different than a standard environmental program because it’s based on Catholic tradition. It’s based on the Gospels, and it’s based on the guidance the popes have given us. And it’s combined with prayer which makes it so much more powerful.”