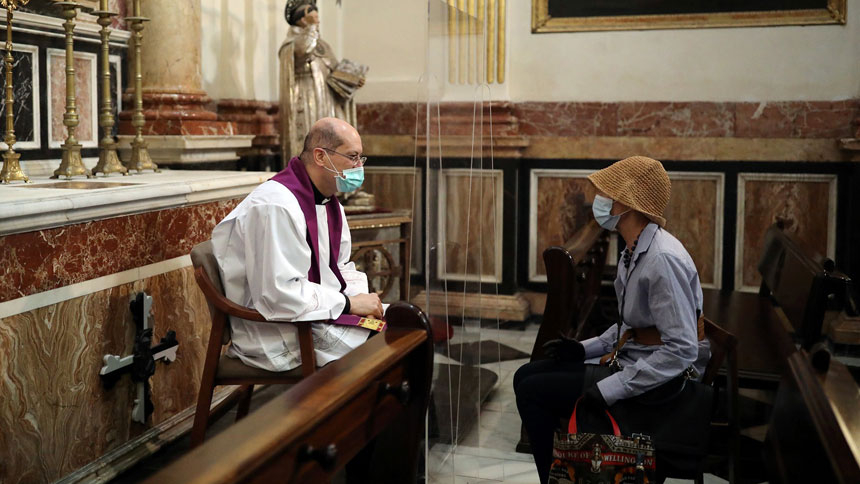 A priest hears confession inside the cathedral in Valencia, Spain, May 19, 2020, amid the coronavirus pandemic. For the Christian, fasting during Lent is ultimately about fasting from sin. (CNS photo/Nacho Doce, Reuters)

In the beginning, fasting was no big deal — or at least it shouldn’t have been.

God gave Adam and Eve all they wanted, with one stipulation: Don’t eat the fruit of the tree in the middle of the garden. And what happened?

Father Daniel Merz, former associate director of the U.S. Conference of Catholic Bishops’ Office of Divine Worship, suggests that when Adam ate of the forbidden fruit, he put his faith not in God but in food.

“The tragedy is not so much that Adam ate food but that he ate the food for its own sake, ‘apart’ from God and to be independent of him,” said Father Merz in a Lenten reflection for USCCB.

By contrast, when Jesus was tempted by Satan with food, wealth and power in the desert after 40 days of fasting, he rejected Satan completely. Jesus knew that “one does not live on bread alone” (Mt 4:4).

“For the Christian,” said Father Merz, “fasting is ultimately about fasting from sin.”

“Fasting from sin” is a challenge all of us face daily although it becomes more prominent, behaviorally speaking, for most of us during Lent, the season in which fasting is the second “pillar,” preceded by prayer and followed by almsgiving.

Lent and its symbolism depicted in Scripture remind us that fasting from sin helps us connect to God and in particular to the covenant that God established with humankind from its earliest days.

The first reading for the First Sunday of Lent recounts the aftermath of the great flood of 40 days and 40 nights that covered the earth and wiped out all but those safely aboard Noah’s ark. Noah and his family had been spared because they had not engaged in the lawlessness and corruption that had gripped humankind since the original sin of Adam and Eve.

When the floodwaters subsided, God told Noah he had established a covenant with humankind, symbolized by the rainbow, that he would never again permit such destruction.

“When I bring clouds over the earth, and the bow appears in the clouds, I will recall the covenant I have made between me and you and all living beings” (Gn 9:14-15).

But a covenant, of course, is a two-way street. In this case, humankind’s “end of the bargain” was that it should refrain — or, in the Lenten vernacular, “fast” — from its sinful behavior that led to the first flood. God was hoping, we can assume, that his covenant would bring a change of heart and a renewed appreciation for what God had provided.

As history has shown, humankind hasn’t always lived up to the terms of the deal. It may be helpful, then, to consider and reflect on what Noah and his brood — human, four-footed, winged and otherwise — endured during their time aboard the ark.

Over the past year, because of the coronavirus pandemic, we have been fasting from our normal routines, including work, school, errands and socially gathering. Most of us have foregone (sacrificed) customary holiday, birthday and anniversary celebrations and much more.

But in the interest of serving the greater good — the health and welfare of all fellow citizens of our world community — many of us have developed new patterns of living. As often as not, this new behavior entails refraining from overindulgences, which is about as Lenten as you can get.

And it’s understandable that with Lent 2021 at hand, many of us might feel that we’ve already done just fine in the sacrifice department, no ark required.

Because for many of us, along with the sacrifice has come a certain amount of suffering — loss of income, loss of employment, loss of good health and, most tragically, loss of loved ones.

So why (continue to) fast in a year already filled with such difficulty and adversity? Put another way, how can we look forward to fasting rather than dread it?

Perhaps nowhere in Scripture, apart from Jesus’ own fast in the desert, is there a more compelling argument for fasting than in the Book of Isaiah, in which the prophet decries those who would fast for their own sake: “Do not fast as you do today to make your voice heard on high” (Is 58:4).

“Authentic” fasting, Isaiah suggests, is much more: setting free the oppressed, feeding the hungry, clothing the naked, caring for the sick, sheltering the homeless.

“Then,” he declares, “your light shall break forth like the dawn, and your wound shall be quickly healed. Your vindication shall go before you” (Is 58:6-8).

Our minds and hearts, Isaiah suggests, cannot be fixed solely on ourselves. Our fasting can lead us to something more than a desire to replenish our own bodies.

It can lead us to a renewed appreciation and desire for God in our lives, to build a stronger relationship with Jesus, whose fast in the desert precluded his sacrifice on the cross that gave us our greatest gift: eternal salvation. A gift worth fasting from sin for, indeed.

Yes, the rain still comes — but so does the rainbow. God has not reneged on his promise.