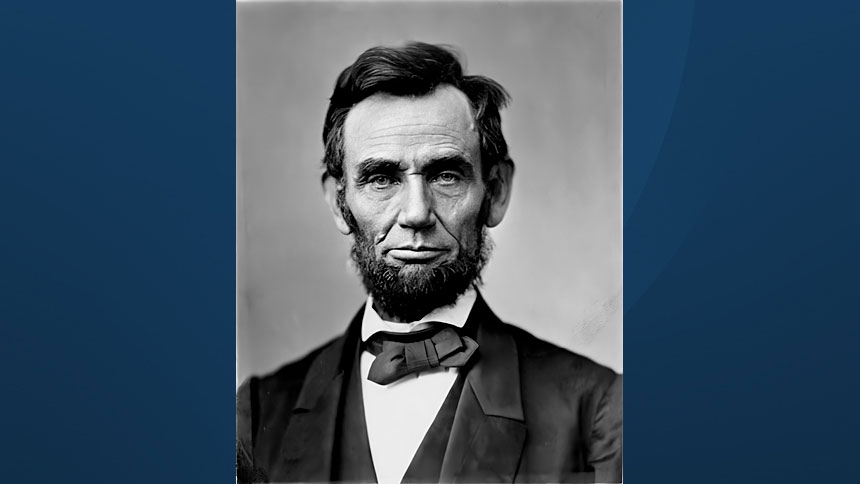 Editor’s note: President Abraham Lincoln was one of the four Americans Pope Francis mentioned during an address to Congress in 2015. Join NC Catholics for a look at the four individuals – Dorothy Day, Thomas Merton, Abraham Lincoln and Martin Luther King, Jr., in honor of July 4th.

In addition to his words to Congress, the pope showed his affinity for Lincoln when he visited Philadelphia that same year and chose to address the people from the lectern used by Lincoln to deliver the Gettysburg address.

Pope Francis said, "Don't forget what happened here more than two centuries ago. Don't forget the declaration that proclaimed that all men and women were created equal, that they are endowed by their creator with certain inalienable rights and that governments exist to protect and defend those rights."

PHILADELPHIA (CNS) -- Not far from where the Liberty Bell is on display, Pope Francis urged the people of the United States to continue to "proclaim liberty throughout all the land unto all the inhabitants thereof," as the bell's inscription says.

Meeting Sept. 26, 2015 with members of the Hispanic community and immigrants at Independence National Historical Park, the pope said when governments respect human rights and freedoms, especially the right to religious liberty, they benefit from their citizens' respect and care for others.

The "ringing words" of the U.S. Declaration of Independence proclaiming the equality of all men and women and their being endowed by their creator with "inalienable rights" continue to inspire people in the United States and around the world, the Argentina-born pope said.

But even such powerful words can ring hollow if they are not "constantly reaffirmed, re-appropriated and defended," the pope said.

In a speech punctuated by off-the-cuff comments and explanations, Pope Francis urged immigrant communities in the United States to be "responsible citizens" of their new home without being ashamed of or hiding their cultural heritage.

Asking forgiveness for speaking in the language of geometry, the pope told the crowd that globalization is bad if it tries to erase all differences, placing everyone in sphere equally distant from one another and the center, but it is good if it respects differences, which are like the varied sides of a polyhedron.

Speaking from the same lectern President Abraham Lincoln used for the Gettysburg address, Pope Francis said the history of the United States is in many ways a history of progressively trying to live out the values affirmed in the Declaration of Independence. As examples, he cited the eventual abolition of slavery, the extension of voting rights, the growth of labor unions "and the gradual effort to eliminate every kind of racism and prejudice."

When a government respects the right of its citizens to profess freely their faith and to live it publicly, the whole society benefits, the pope said.

Religions, he said, "call to conversion, reconciliation, concern for the future of society, self-sacrifice in the service of the common good and compassion for those in need."

The religious dimension of a people's life, he said, "is not a subculture. It is part of the culture of any people of any nation."

The Quakers who founded Philadelphia, he said, "were inspired by a profound evangelical sense of the dignity of each individual and the ideal of a community united by brotherly love."

Jesuit Father Federico Lombardi, Vatican spokesman, told reporters that as the pope was heading in a helicopter from Manhattan to John F. Kennedy Airport for his flight that day to Philadelphia, New York Cardinal Timothy M. Dolan asked the pilot to circle the Statue of Liberty and Ellis Island so the pope could see them.

At the Philadelphia gathering, Pope Francis said concern for the dignity of all, "especially the weak and the vulnerable, became an essential part of the American spirit."

The pope used his speech "to thank all those, of whatever religion, who have sought to serve the God of peace by building cities of brotherly love, by caring for our neighbors in need, by defending the dignity of God's gift of life in all its stages, by defending the cause of the poor and the immigrant."

Those who stand up for the poor and the immigrant, he said, "remind American democracy of the ideals for which it was founded, and that society is weakened whenever and wherever injustice prevails."

Dozens of cardinals and bishops attended the event as well. But Bishop Mark J. Seitz of El Paso, Texas, tweeted that they did not have their customary reserved seats up front and instead were "learning to live on the 'periphery,'" a favorite term of Pope Francis. Being in the crowd, the bishop added, offered a "better perspective."

Turning to the representatives of the Hispanic and immigrant communities present gathered at Philadelphia's Independence Mall, Pope Francis said he knows the sacrifice and struggles many of them faced as they sought to build a better life for themselves and their families in the United States.

And while they may have been in need when they arrived, he said, they also must remember that their experiences and cultures also are a gift that can enrich their new home, just as the heritage of previous waves of immigrants over the centuries did.

"You should never be ashamed of your traditions," the pope told them. "I repeat, do not be ashamed of what is part of you, your life blood."

A vibrant faith and a strong family life are particularly important gifts to share, he said. "By contributing your gifts, you will not only find your place here, you will help to renew society from within."

Before leaving Independence Mall, Pope Francis -- repeating a section he had read early in this speech -- told the people, "Don't forget what happened here more than two centuries ago. Don't forget the declaration that proclaimed that all men and women were created equal, that they are endowed by their creator with certain inalienable rights and that governments exist to protect and defend those rights."

"May we keep freedom, may we care for freedom -- freedom of conscious, religious freedom," he said, and may all the people of the United States express "gratitude for the many blessings and freedoms that you enjoy."