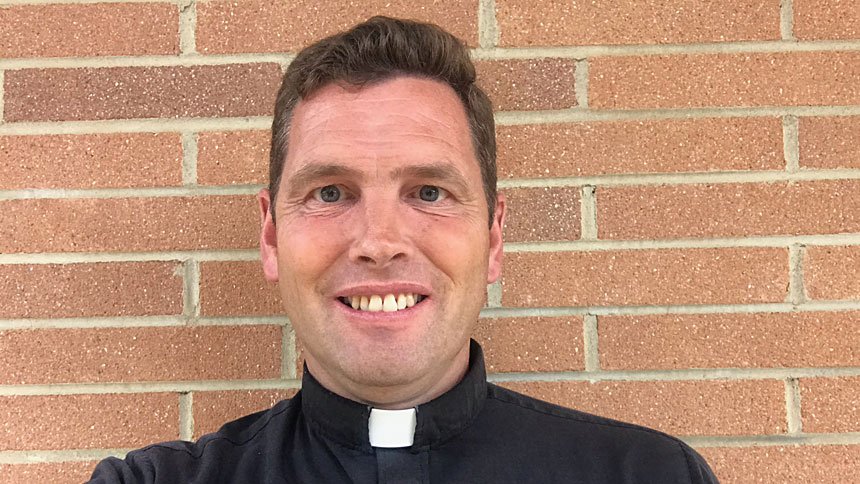 Many priests say that they knew, or at least suspected, from a very young age that they were being called to be a priest.

Father Joshua West is not one of those priests.

In fact, Father Josh candidly admits that at the time his friends were being confirmed, he chose not to be. Not only that, he says he told his mother at the time that he wasn’t even sure he wanted to be Catholic.

It was a moment, he said, that was akin to sticking a sword through her heart.

In November’s episode of “Meet the Priest,” Father Josh candidly talks about his winding road through faith, purpose and discernment. It’s a road that started…in the sky?

On the show, Father Josh jokes that he ‘grew up on an airplane.’

The son of a Department of Defense employee, West moved often and got a taste for travel, adventure and service.

Find out how his desire for those three things landed him in Helena, Montana, where he attended Carroll College.

Though Carroll is a Catholic college, Father Josh readily admits that what drew him was the brochure, which featured prominent pictures of skiing and skydiving.

While there though, his heart changed. He remembers being in bed and feeling tears roll down his cheeks because he felt no direction, no purpose in his life.

He started going back to Mass and eventually moved back in with his parents. He began going to adoration and met someone that would change his life forever.

Now the chaplain for NC State University, Father Josh uses his story and gleans from his past as he walks with college students through tumultuous times in their lives; when every decision feels really big – from choosing a major, to discerning a vocation.

Find out how Father Josh, an order priest with the Legionaries of Christ, found his way to the Diocese of Raleigh and hear about the incredibly poignant moment when he told his mom, over a decade after telling her he didn’t want to be Catholic, that he was going to seminary.

All that and much more on “Meet the Priest,” airing Friday and Saturday November 20 and 21, on Catholic540-AM Divine Mercy Radio. If you miss the show, or to hear past episodes, go to: www.Catholic540am.org, click on ‘Listen’ and scroll to ‘Local Programs.’