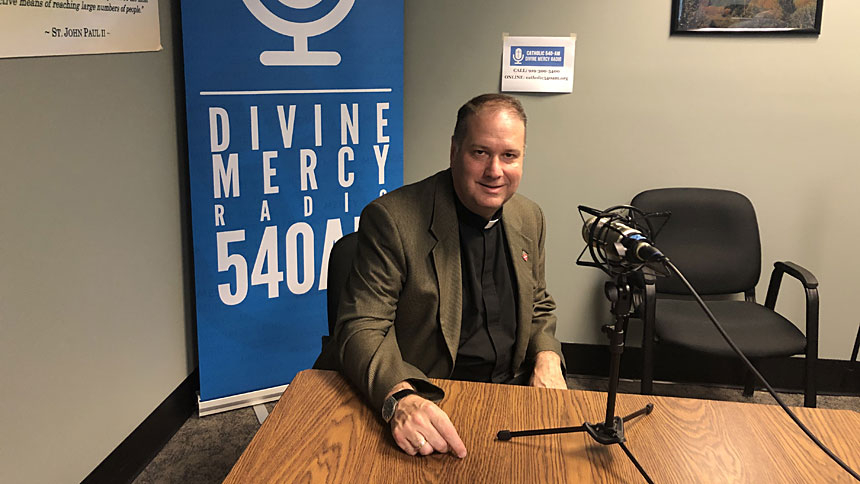 A native of New Jersey, Father McCue grew up in Catholic schools and spent much of his time as an altar server. In fact, he was so immersed in the church life that no one, not his parents, three older siblings or his best friend (who also became a priest and currently serves in the Archdiocese of Newark) was surprised when he followed the call to seminary shortly after high school.

He explains on the program how having a calling is not enough, you have to get people to agree with you. For Father Scott, who felt a call to serve in the South, he had to go the extra mile, literally.

During that trip was his first stop to St. Thomas More Church. A couple, who are still parishioners today, were part of the board and gave their blessing. After receiving several more approvals, he officially transferred to become a seminarian for the Diocese of Raleigh.

What he couldn’t have known was just how much St. Thomas More would continue to be a part of his life after that initial interview.

Prior to the construction of Holy Name of Jesus Cathedral, major diocesan Masses were held at rotating parishes throughout the diocese because Sacred Heart (then Cathedral) was too small. In 2001, the year Father Scott McCue was ordained a priest, the ordination Mass was held at St. Thomas More. That parish also became his first assignment as a priest. Immediately after ordination, he spent one year there as a parochial vicar.

Now, as pastor at St. Thomas More since 2011, he talks about how grateful he feels to walk in the very spot he was ordained each time he says Mass. “I know which block I was kneeling on when it happened,” he says.

Before his full circle return to Chapel Hill, Father Scott also served as pastor of St. Ann in Clayton for five years and was assistant principal for spiritual life at Cardinal Gibbons High School for four years.

In 2018, Father Scott was appointed to a new six-year term as pastor of St. Thomas More, a parish with almost 3,000 families and an associated school that was established in 1964.

One especially unique trait about St. Thomas More Church is the full immersion baptismal font. On Holy Saturday, for the Easter Vigil, he feels gratitude that he is able to so closely replicate what baptism looked like in the early Church.

Father Scott also serves as the dean of the Piedmont Deanery and, in 2019, was appointed by Bishop Luis Rafael Zarama as a member of the College of Consultors.

Find out what he recalls most about ordination, hear his challenge to listeners and so much more on July’s broadcast of Meet the Priest at noon on Friday, July 31, and Saturday, August 1.

To catch this and other local programs at any time, visit www.catholic540am.org/localprograms.