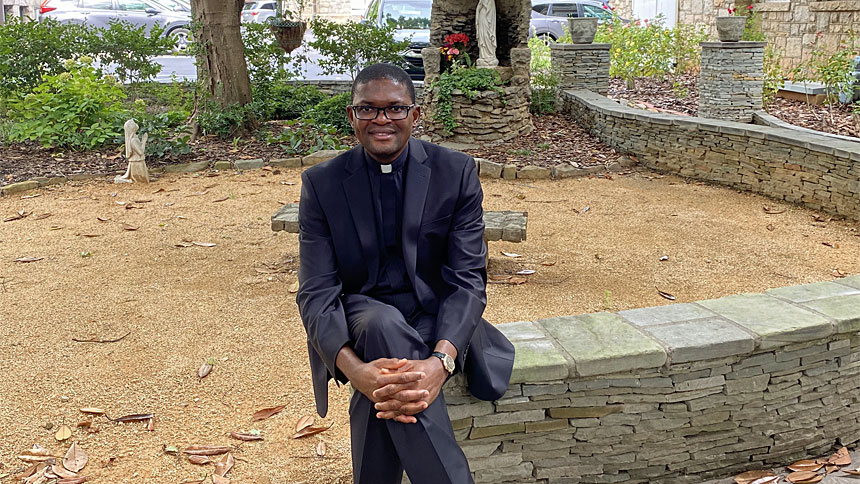 On the October broadcast of Meet the Priest, one of Raleigh Diocese’s newest priests, Father Matthew Nwafor, talks about his path to priesthood and how his discernment strengthened his faith.

Born and raised in Nigeria, Father Matthew was the sixth of seven children. He says that he was always raised to “love God and try his best.” But that didn’t mean that his path to the priesthood was easy, or predictable for that matter.

When a 20-year-old Nwafor originally decided to go to seminary, he didn’t tell his family where he was going. He simply told them that he got admission to a college in a different state. He packed his bags and left.

It wasn’t until years later, when his brothers tracked him down during a pastoral year, that they understood where he was.

And while they may have been shocked, the surprises didn’t end there.

In this candid interview, Father Matthew goes on to share how his family reacted when he discerned away from that seminary, became a professor of philosophy and, eventually, ended up traveling to DePaul University in Chicago to further his studies.

It was while visiting his sister in Wake Forest, North Carolina, that his desire to become a priest strengthened once again. In what can be described as a sign of God’s timing, the priest he happened to approach years ago was Father Philip Tighe, who was pastor of St. Catherine of Siena at the time.

“I want to be a priest,” Nwafor told Father Tighe after Mass.

From that moment, his new path was set.

There was no way that Nwafor could have known that when the time came for him to return to Raleigh and enter the seminary for the Diocese of Raleigh, Father Tighe would become the vocations director that walked with him through the latter part of his discernment and through his ordination.

Continuing his spirit of candor and light-hearted humor, Father Matthew says all through his discernment he prayed incredibly hard because whatever road he picked next, he wanted it to ‘stick.’

Though he openly admits that his path may look different from some brother priests, it only strengthened his faith. “If you have fallen many times, stumbled many times. It could be a way of strengthening you, so you build stronger trust,” he says.

Find out what Father Matthew’s most joyful revelation as a new priest is, why he compares priesthood to motherhood and what scripture passage he says brings him absolute peace in times of trouble. All this and more on this month’s Meet the Priest. The show airs on Catholic 540-AM Divine Mercy Radio October 29 and 30 at noon and October 31 at 1:00pm.