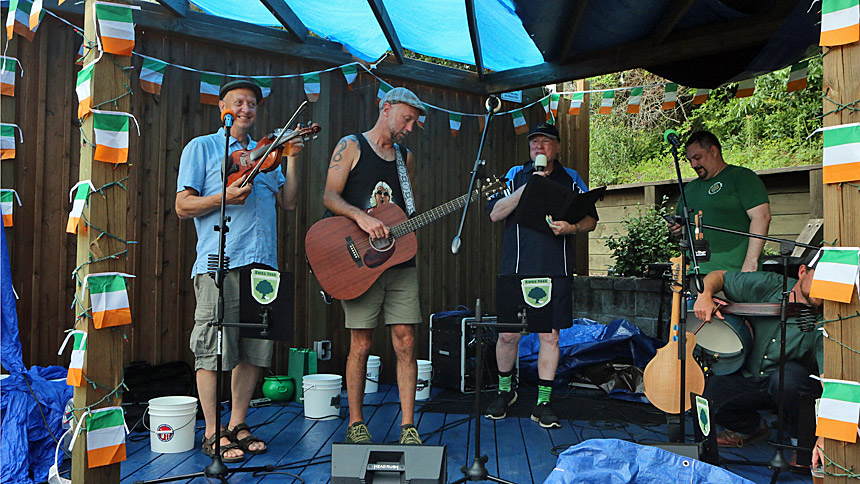 The event brings together hundreds of people from all backgrounds to celebrate Irish culture through music, dancing and games. It is the very definition of having a great time for a good cause.

What may not be as evident is the faith that propels this event, and the parade, forward.

Included in the parade committee are representatives from at least five eastern North Carolina parishes. NC Catholics asked a few leaders to share how their community, faith and celebrating heritage are intertwined.

One of Joe Costy’s first memories is going to a party welcoming an Irish family who had immigrated to the United States. He said when the fiddle started playing, he heard a thunderous noise. It was the Irish step dancers dancing jigs and reels in time to the music. Meanwhile, gifts and kindnesses were being showered upon a family.

Since that day, he said, “For me, music, being charitable, hospitality and community all goes together.”

It is why he started the committee in its current incarnation, said his wife, Bobbi.

“He worked on the parade in Raleigh for a number of years [prior to moving to the coast], he wanted to bring that experience here. He saw that there was so much we could do to include more people and to help more people who needed it,” she said. “There is absolutely a connection between what this committee does and our Catholic faith … we like to get together, we like to share our Irish heritage with other people, but the whole point is to raise money for people who are not as fortunate as we are.”

For Meg and Joe Newcomb, community is one of the most important aspects of the Wilmington parade and of this hooley, which supports it.

“The Wilmington parade brings lots of business downtown and that helps the business owners. We’re committed to doing that for our community, especially after hard times like hurricanes, and now, after the pandemic,” said Meg.

Joe agrees and said that a big part of the committee’s efforts is to continue making an ever-widening tent that includes the whole community and invites them to have a good time for a good cause.

“It’s important to our Catholic faith that we give service to others. And the sense of community on this committee is wonderful. Everybody brings their own talents and you get to know them and find out where they shine,” Meg added.

While Diane couldn’t make the event this year, Frank worked double time, serving as both emcee of the hooley and unofficial photographer.

Born in Ireland, Frank’s family moved to Paterson, New Jersey when he was 3 years old. His father served as chauffeur to the bishop of the Diocese of Paterson and he remembers having priests at his house for dinner.

His Irish heritage and his faith are cornerstones in his life and the reason that this committee and these events are so important to him.

“I consider all of these activities a way of giving back to the community and they remind me that we need to use the talents that God gave us and not bury them under a bushel basket. They’re also a great way to make friends and enjoy the camaraderie of folks who share common interests and goals and to share our love of our heritage and faith with the wider community,” he said.

While Linda created a beautiful and festive chalkboard sign which welcomed guests to the brewery, Brian set up the entrance table and manned the donation bucket.

He said that they got involved in the committee after a friend made the offer quite simple. “He said, ‘You ought to join. You’re a little Irish,’ so here we are,” said Brian.

Also a state director for veterans affairs, Brian expressed gratitude that despite all that has happened in the past year, they are still able to get together and help others in need.

“It’s kind of neat, that all these guys get together from different parishes. You get kind of a synergy, with the Catholic faith and the community joining together. With the parade and the charitable works, I think we’re so lucky to be able to still do this after all we’ve been through,” he added.

“We had known him about five minutes,” laughed Cary.

While relatively new to the committee, the Shaffers say that after living somewhere that had a Catholic church on every corner, they are grateful to be able to strengthen their faith by working alongside people who share their life experiences. 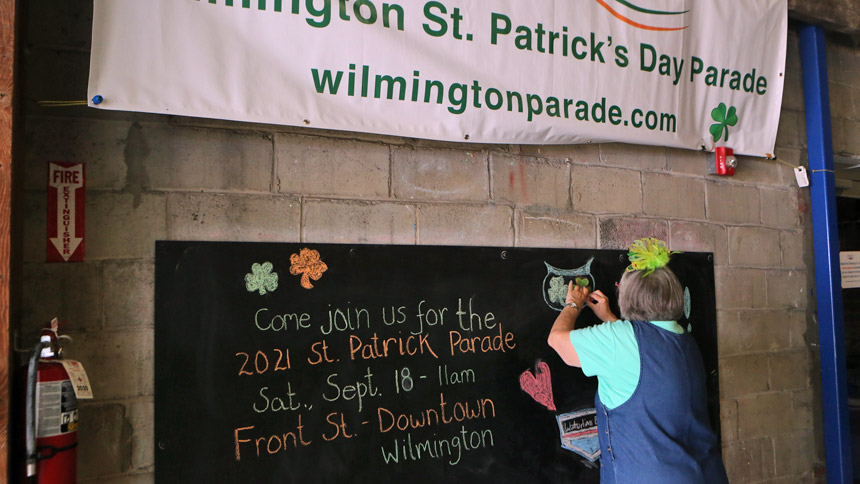 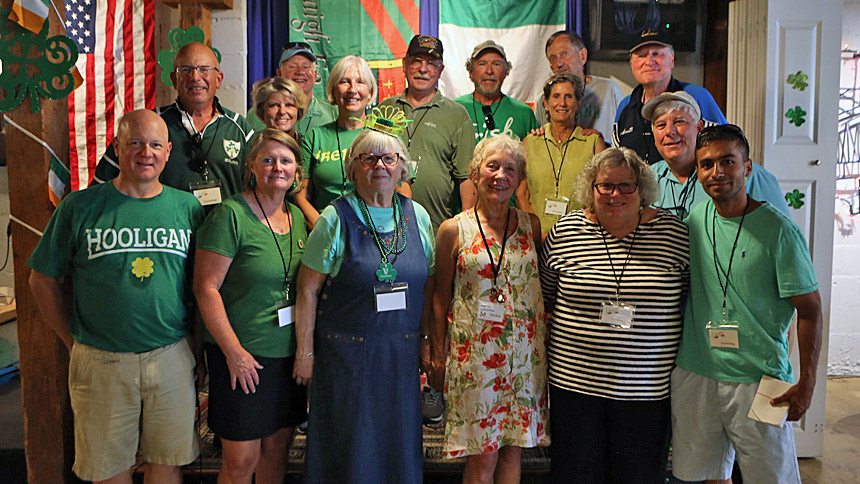 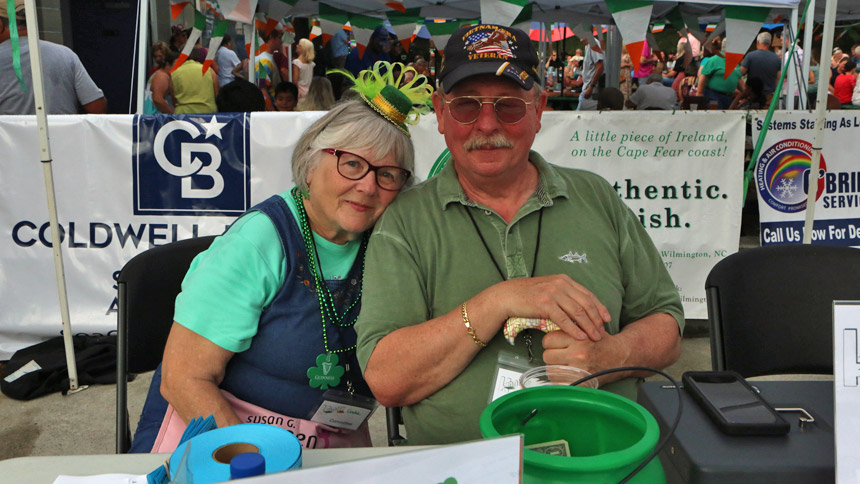 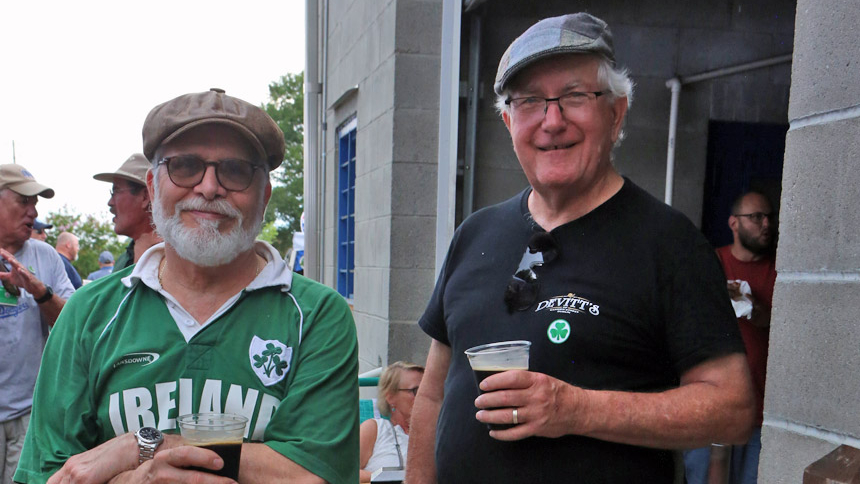