Papal consecration of Russia, Ukraine has history of controversy behind it 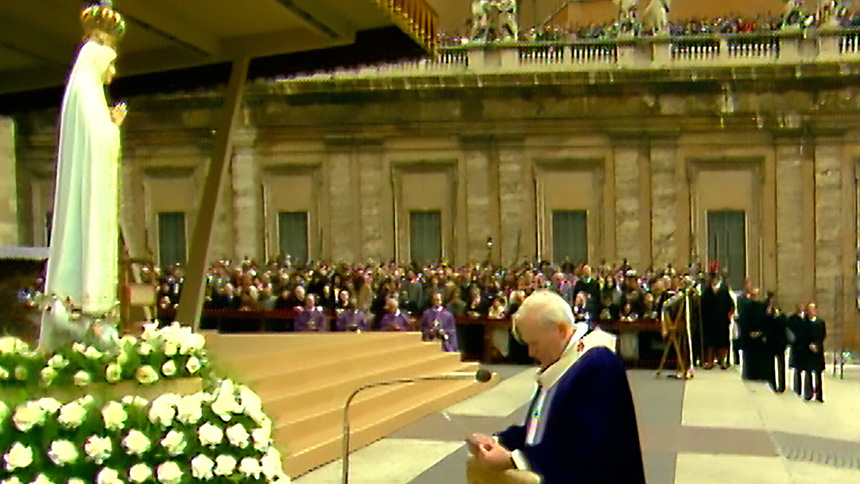 Above: Pope John Paul II kneels in front of the statue of Our Lady of Fatima as he entrusts "all men and women and all peoples to the Immaculate Heart of Mary," in St. Peter's Square at the Vatican in this March 25, 1984, file photo. Some devotees of the Fatima message have questioned whether the late pope correctly consecrated Russia to Mary in 1984 because he did not name the country. It's not known if Pope Francis will name the countries of Ukraine and Russia when he consecrates the countries to Mary March 25. (CNS photo/Vatican Media)

VATICAN CITY (CNS) — While bishops in Ukraine and Russia are grateful Pope Francis will consecrate their nations to Mary, other Catholics are eagerly awaiting the text of the pope’s prayer to see if he does it “correctly.”

At issue is whether he explicitly consecrates Russia — named out loud — to the Immaculate Heart of Mary when he does the consecration March 25 and whether all the bishops of the world do so at the same time.

Until the beginning of World War II, the message Our Lady of Fatima gave to three shepherd children in Portugal in 1917 was simply one of prayer and repentance.

But in 1941, long after the deaths of Sts. Francisco and Jacinto Marto, the last of the visionaries, Sister Lucia dos Santos, gave a full account of the apparition’s “secret.”

Mary, she said, first showed them a vision of hell. Then Mary urged prayers for Russia’s conversion, made the request for its “consecration” in the name of her Immaculate Heart and promised her eventual triumph. The third part of the secret, the subject of much speculation, was not revealed until St. John Paul II ordered its publication in June 2000.

The devotion of St. John Paul to Mary and, especially to Our Lady of Fatima, is clear. After he was shot by a would-be assassin on the feast of Our Lady of Fatima in 1981, he credited her with guiding the bullet so that it would wound and not kill him. He had the bullet placed in the crown of the statue of Mary at the Fatima shrine.

Recovering from the shooting, Pope John Paul had Sister Lucia’s text of the “third secret” brought to him in the hospital.

He recorded an “Act of Entrustment” of the world to Mary in June 1981.

Three years later, on March 25, 1984, in St. Peter’s Square, he did so in person. The Vatican’s description of the event says, “The Holy Father, in spiritual union with the bishops of the world, who had been ‘convoked’ beforehand, entrusted all men and women and all peoples to the Immaculate Heart of Mary.”

But some devotees of Our Lady of Fatima argued that the “consecration of Russia” requested by Mary in 1917 was never performed properly.

Before her death, Sister Lucia insisted — in letters published in the Italian Catholic magazine 30 Giorni and in person to Cardinal Tarcisio Bertone — that the consecration had been performed correctly in 1984 by St. John Paul.

At the ceremony, the pope entrusted the whole world to Mary and invoked her aid in deliverance from evil, famine, war, hatred and injustice. He asked the world’s bishops to join him — an important detail to the millions of Fatima followers, who say Mary wanted the consecration to be carried out with the world’s episcopate.

But his prayer to Mary did not mention Russia by name, and that made some people think it had not been done correctly.

Then there is the question of the “conversion” of Russia, something that was easy to assume referred to communist rulers or a communist system of government ruling the Soviet Union, oppressing the country’s traditionally Orthodox communities and harshly persecuting Catholics and others.

In 2017, the 100th anniversary of the Fatima apparitions, Catholic Archbishop Paolo Pezzi of Moscow told Catholic News Service he had seen the conversion of Russia to Christ in his lifetime.

“We should not interpret Our Lady of Fatima as foretelling Russia’s conversion to Catholicism,” he said, but to Christ.

Though Russia has no official state religion, the majority of Russians identify with the Orthodox Church.

St. John XXIII read the secret. He wrote in his diary, “17 August 1959: ‘Audiences: Father Philippe, Commissary of the Holy Office, who brought me the letter containing the third part of the secrets of Fatima. I intend to read it with my confessor.”

The late Cardinal Loris Capovilla, who was Pope John’s secretary at the time, told CNS in 2012 that he was present when the text was brought to the pope, and he saw it.

“I must say, sometimes there has been exploitation of the cult of Mary for political ends,” he said.

Agreeing with what Archbishop Pezzi had said, Cardinal Capovilla said, “When the message of Fatima says, ‘In the end, Russia will convert and my heart will triumph,’ I have always interpreted it in this way: What will it convert to? Christianity.”

But a Marian apparition was needed for that, he said.

“All of Christianity — all — for me, for the Protestants, for the Orthodox, is summed up in these words: Convert, recognize your condition as little creatures and believe in the Gospel, put it into practice, live it,” he said. “It seems to me that is everything.”