One Year Later: Parish lives out its core values 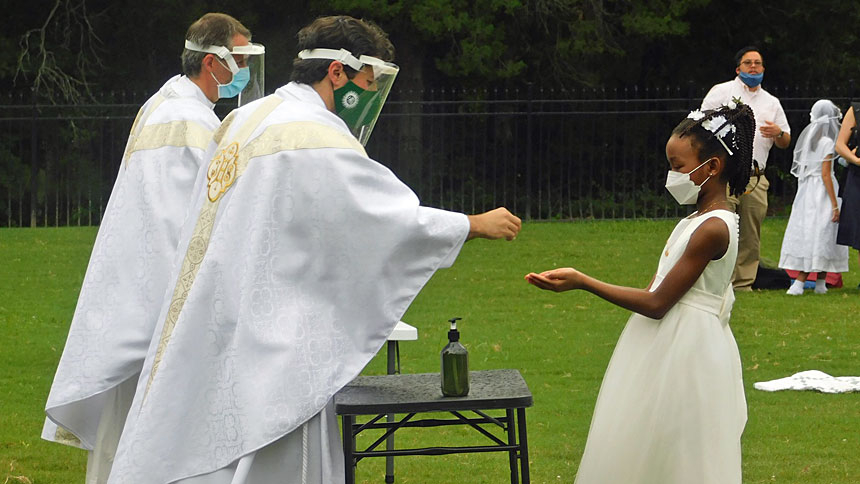 Through a virtual interview from his office, Father Phil Hurley, S.J., pastor of St. Raphael the Archangel Church in Raleigh, shared his experience during the pandemic.

NC Catholics Magazine: Tell us about your experience in the first days after the announcement of the closure of public places, including schools and the church. Do you remember your first thought?

Father Phil: It's been almost a year. In some ways it seems like five years, probably to lots of people. Honestly, the first weekend in the middle of March when the governor's announcement came out about closing down public places and Bishop Luis' announcement following about not having in-person Masses.

My first thought was thanks be to God for all the good leaders that I have on my staff at our church and our schools here. Because some of our key leaders that I turned to for advice on decision making, and have for many years, gathered together that week before as things were progressing with the COVID-19 situation in North Carolina and just gave me some very good advice about thinking proactively.

So, yes one of my first thoughts was ‘Thank you, God’ for these amazing, mostly lay leaders that we have here at St. Raphael. And you know, we have a plan.

To not be able to have in-person classes in our schools … [and] one of the things I thought with regard to the Mass in particular was … this is going to be really hard.

And so, it just occurred to me … this is not ideal by any means, not being able to have people in-person at Mass. But perhaps it's going to be the opportunity for people to focus even more and to learn some ways to live their faith outside of the walls of the church, so that when we do come back together, that aspect of our lives is going to be stronger than ever before.

NCC: At what point, did you decide to start using social media differently, and how was that first livestream transmission of the Mass?

FP: Because of the foresight and the proactive thinking of a lot of my key leaders, we had planned in the week ahead of that first weekend to have a livestream option; we were ready but very low tech.

I really thought at a couple of points during the Mass – ‘I don't know if this is working at all, but I'm just going to keep going. I guess it's livestreaming.’ So, after the Mass … I walked over across the church to the team that had been doing the recording and all, and I said, ‘Well, how did it go?’ And I saw one of our leaders with tears in her eyes and I thought, ‘Oh no, we didn’t do it,’ and she said, ‘No, the opposite … people were watching us and interacting!’

I had no idea how God would use this … this is hard and strange and not ideal but God, God's saying what he's going to do.

NCC: Do you remember what was the most difficult time during the quarantine?

FP: Early on in the in the spring [of 2020] what was difficult was just not knowing how long this was going to be, you know? Remember that early stage?

I think the most difficult part was not having in-person Mass at all. At a certain point we realized, ‘OK this is going to be a longer period of time,’ but early on just the uncertainty was hard.

It opened up some new opportunities for us, but still after that extended period of time of so many people not being able to come in person, it was just hard. People wanted to connect with each other and to see each other. Our faith is incarnational, and the sacraments are incarnational.

During that early phase as well, one of the most difficult things that I experienced as a priest, together with people, were situations where a loved one, whether with COVID or not with COVID, but especially with … were in the hospital in ICU and were dying and neither I, as the priest, nor sometimes any family members, or many family members, were allowed to be with them as they died. And we adapted here as much as we could … video … prayers. But that was really hard … just trying to imagine what that was like for families.

And I know that was different in different parts of the country … and I understand the reasons why medical personnel did this, but we were not allowed in. It’s so much better now, where more and more, I am allowed in … with the proper PPE.

NCC: How has the experience been for the community in your parish?

FP: As with any crisis moment, it's been an experience of big challenges, but also hidden opportunities and blessings. And I would say it's been a time, not that this has been easy, it's actually been mostly difficult, but it's been a time for us to really live out some of our core values as a parish.

What are some of these core values? And they actually reflect some things from St. Ignatius and the spiritual exercises from the Jesuit tradition and the first two of them, it’s Latin terms, is called the magis and the second one is called Cura Personalis. The modules in Latin, it just means the more.

It's basically this this value of like we're always seeking to do. Many people maybe have heard AMDG, Ad maiorem Dei gloriam, and it means, all for the greater glory of God.

It's this attitude of what more can we do for the Lord? How can we serve God and people better? How can we go deeper? It doesn't always mean doing more things, but how can we do it more deeply, or more fruitfully?

And so, just like Bishop Luis asked early on, we need to balance our need for the sacraments with trying to protect people's health as much as possible. There's no manual for this; none of us is trained for this, you know, but it's trying to find what is that balance and discern it. And I think our staff and volunteer leaders here have done such a tremendous job of living out those values and putting them into action in different ways.

Just to give some examples … balancing those two values has informed the way that we have tried to provide connection. So, same mission … but we just need to change our methods. The livestreams … we tried to make that as good as possible.

We started what we now call the virtual atrium … we have discussion after Mass, usually about the readings and the homily … and people make comments, and that’s something that’s totally new. We are able to have that feeling of conversation … online in this virtual atrium.

One of our most touching, and most successful ministries, has been a team of people that came together to provide a way for people who were participating only online to drive to the church to step out of their cars and receive Communion.

We’re going to move forward. And we are going to care for people in all these different ways as we do that. 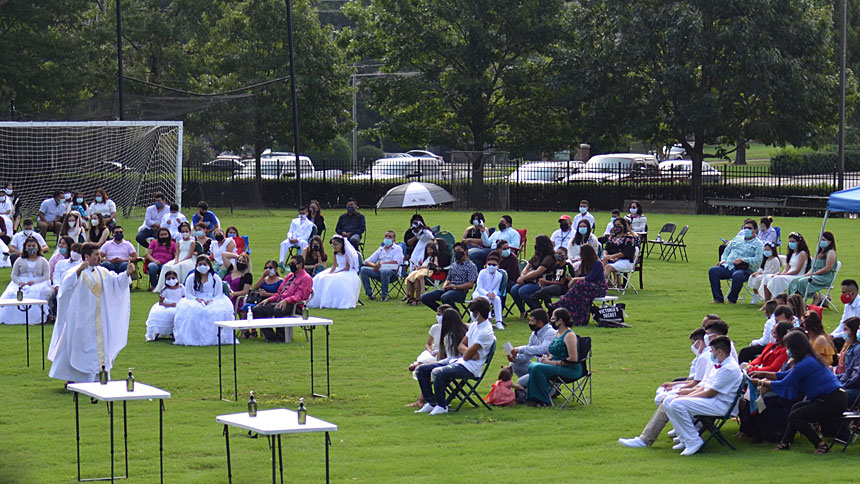 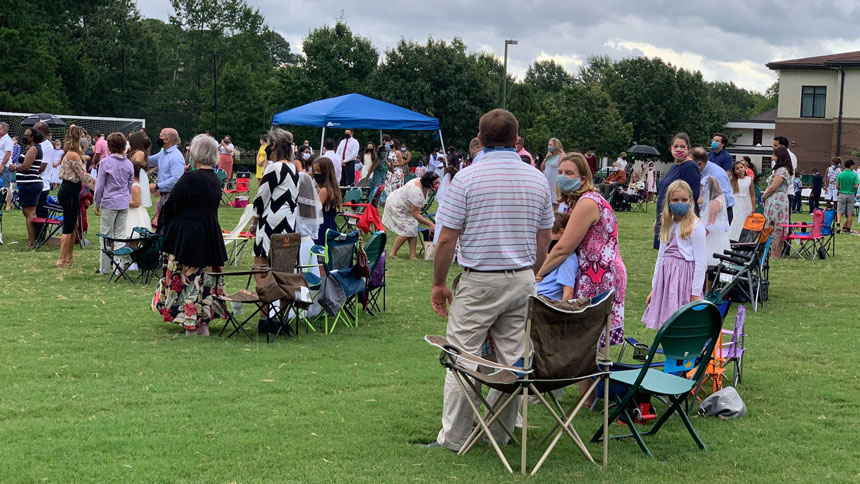 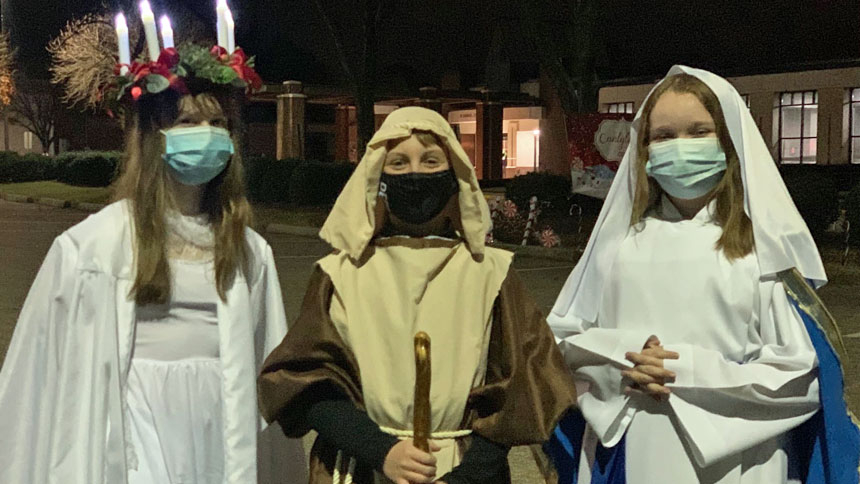 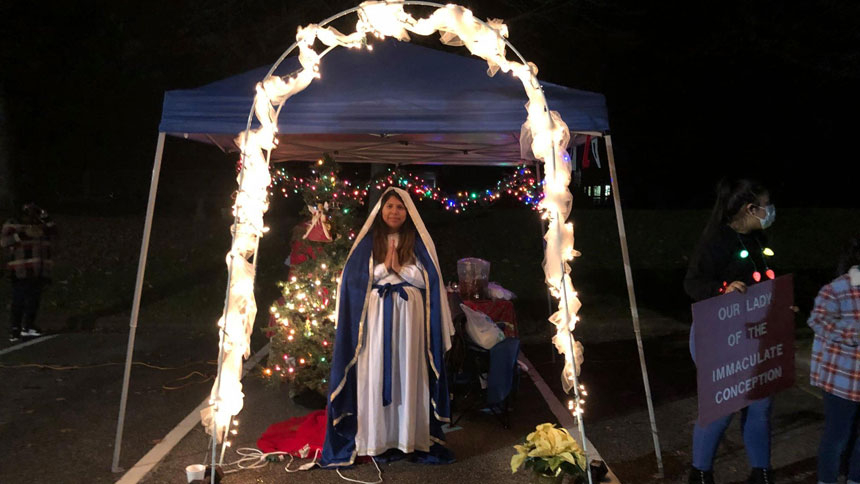 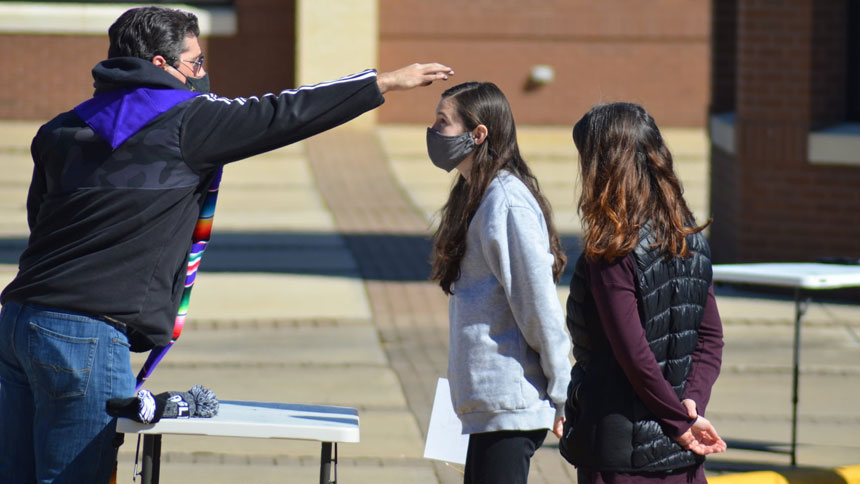 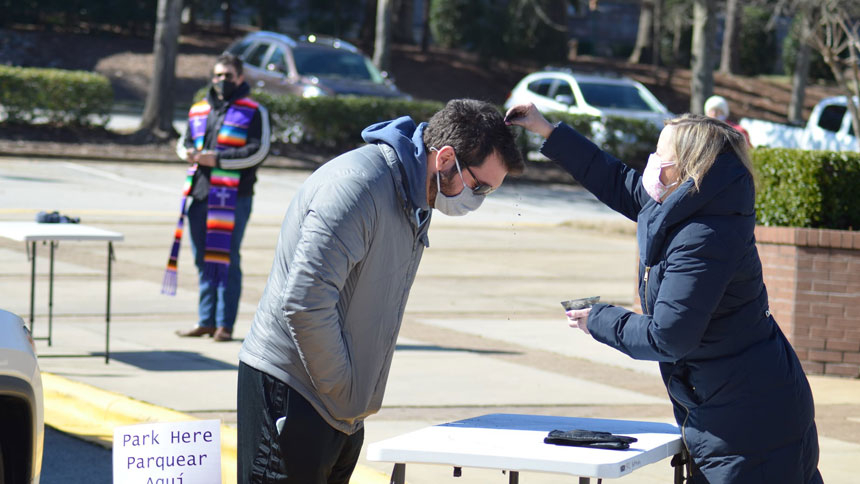 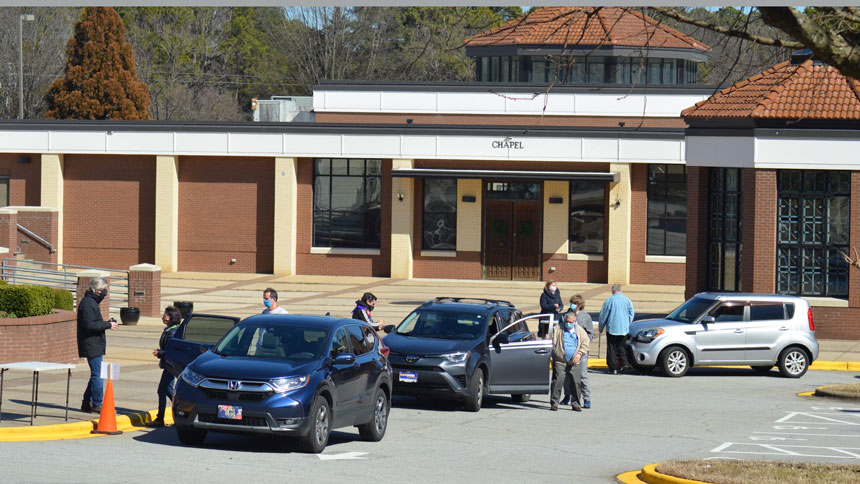