One Year Later: 'Everything we can' 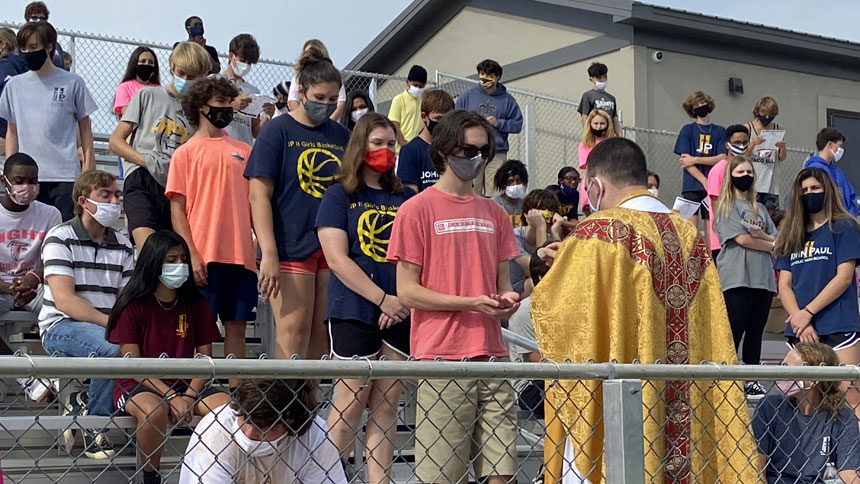 Today is Friday, March 12, 2021. This time last year, morning assembly included instructions for our students to take home all of their academic materials in case school would transition to remote learning the following week. Assembly ended with one of our seniors asking me, “Mr. Smith, will we still have prom? What about graduation?” Like a wave getting ready to crash the shore, the reality of the pandemic had reached the feet of our students. The only response I could muster was “I don’t know, but we will do everything we can.”

The next day, our principal shared with our John Paul II High School community, “With careful consideration, collaboration, and much prayer, we have decided to make a transition from on-site instruction to remote learning.” Thus began the roller coaster of emotions and logistics that came with no manual or playbook. Dr. Martin Luther King Jr. once said that “faith is taking the first step even when you don’t see the whole staircase.” We not only could not see the whole staircase; there was a thick fog in front of the first stair.

March became April, and Easter Break came and went. So, too, did the prospects of a prom. We tried to find ways to make the remaining days for our senior class memorable -- in a positive way. Bishop Zarama surprised them by popping into their theology class Google Meet one day with an inspiring message. Administrators took one day to spread out across Pitt and neighboring counties to personally visit each senior and surprise them with a personalized yard sign and COVID-themed senior T-shirt. It was great to see their faces, but it was tough knowing they would trade it all to be together at school once again.

That day finally came May 30 after making the decision that we would move forward with a graduation ceremony. Each graduate was only allowed two guests. With everyone socially distanced and wearing masks, our seniors were able to celebrate in a way that most others did not. The ceremony was livestreamed for other family members and a few of our faculty “tailgated” to congratulate the graduates as they left the parking lot.

While summer at the school is normally a time to exhale and recharge for the coming year, these were no ordinary times, and there was no time for exhaling. In the middle of July, the decision was made that the start of school would offer students the option to return to the school building. The class schedules students received in the spring were scrapped and a new pod-based schedule was created.

Now, instead of students moving from class to class, students would stay in the same classroom and teachers would move. Furniture had to be moved to accommodate teachers having desk space for planning periods. Tape was applied to the classroom floors to show desk locations for social distancing. Materials had to be ordered to assist teachers with hybrid learning: teaching students in class and at home at the same time.

A new system of drop-off and pick-up had to be implemented so students would not be congregating. All this and more had to be done in addition to all of the usual work done over the summer to prepare for a new year. Every minute was worth it because we had surveyed our students and parents who told us, “We want to go back to our school!”

With each passing day after the start of the school year, I sensed a growing struggle amongst our school community between appreciating that we were able to return to school and a very strong desire to function as if we were in a bubble that was unaffected by the world around us. For the first two weeks, there were no extracurriculars as we all learned to adjust to a “new normal.” While it was necessary to focus on the adjustment and academics, it became glaringly obvious why the high school experience at JPII is about four pillars (spiritual life, academic life, student life and athletic life) and not just one or two pillars.

As I think back over this school year and what has been most memorable, two things come to mind: the feast day for our patron saint and football.

John Paul II’s feast day is October 22, and every year it is a day of celebration at our school. This year it was extra special because it was the first day the students participated in activities outside of their pod groups. As I was running around getting photos and videos of the activities, I overheard students introducing themselves to one another, and it was an unfortunate reminder of the impact of the pods on our community. We are a small school of 150 students, so the sense of community is important to our students, faculty and staff. Two months into school and some of our students did not know each other. That was tough to hear, but from day one we have encouraged our students to focus on what we can do, not what we cannot do.

This year was the second year for our football program, and thankfully we were able to play every game on our schedule. State and athletic association rules did not allow for fans to start the season, so schools scrambled to livestream athletic events for parents and students to watch games.

Thankfully for us, we started livestreaming last year, so we were ahead of the curve. Our first road game was the opposing team’s first home game, so I made plans to attend just in case there were issues with the livestream. My daughter (who is a junior at JPII) and I got on the road late, and about 10 miles from the school and just prior to kickoff, my phone started blowing up with messages from parents who could not see the game. Shortly after the game started, I was live on Facebook from our sideline and providing commentary. This was the closest we could get our football families to that sense of community that is so important at our school -- and this became the norm at our home and away games. For the first few home games and all of the away games, I became our parents’ connection to their sons on the field. As a lifelong sports nut and wannabe sportscaster, I was having a blast ... but as a parent myself, the importance of what I was doing became “real” when a player would go down on the field, and I was able to later let his parents know that he was OK.

Our football parents got to know one another through commenting on the games until they could meet one another in person when the rules allowed for them to attend home games. Just like our students on feast day, I think I will always remember hearing a freshman dad introduce himself to a fellow parent too far into the season.

It would be easy to only think of the distractions the pandemic has caused in our lives. But as time has passed over the last year, I’ve challenged myself to see that it has not all been bad. There is good to be found in the hard times. I will always remember the Friday night road trips with my daughter who tagged along to help with the livestreaming. I doubt most parents will hear their children say, “But I don’t want to go to school!” Over last summer, “adapt and overcome” was the message from our assistant principal, and I would like to think that everyone in our school community did that as best as we could.

As I opened this reflection, today is Friday, March 12, 2021, and at the end of Mass Father Magee reminded those gathered that one of our teachers is celebrating a birthday. Prior to COVID-19, we would sing for those celebrating a birthday during morning assembly (where the whole school is gathered to start our day), but assembly has been livestreamed this year so there has been no singing. It was the first time in a year that we sang “Happy Birthday” to someone. It was simple but felt “normal.” May we never forget to appreciate the simplicities of life. 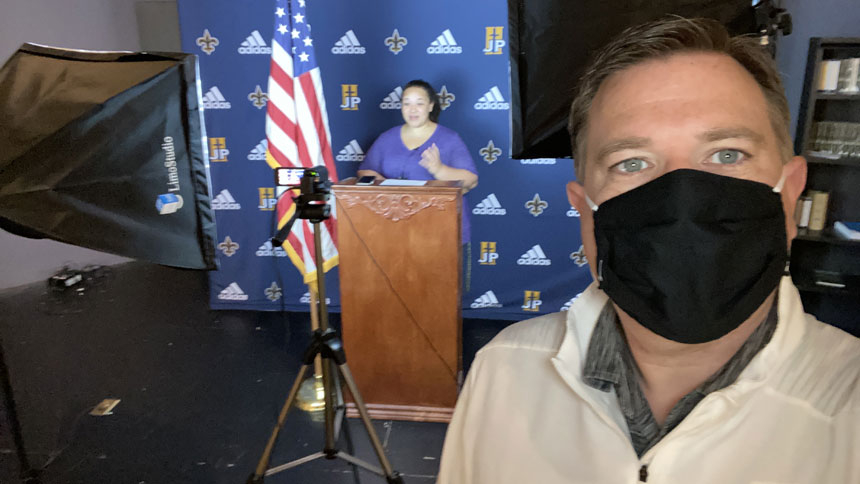 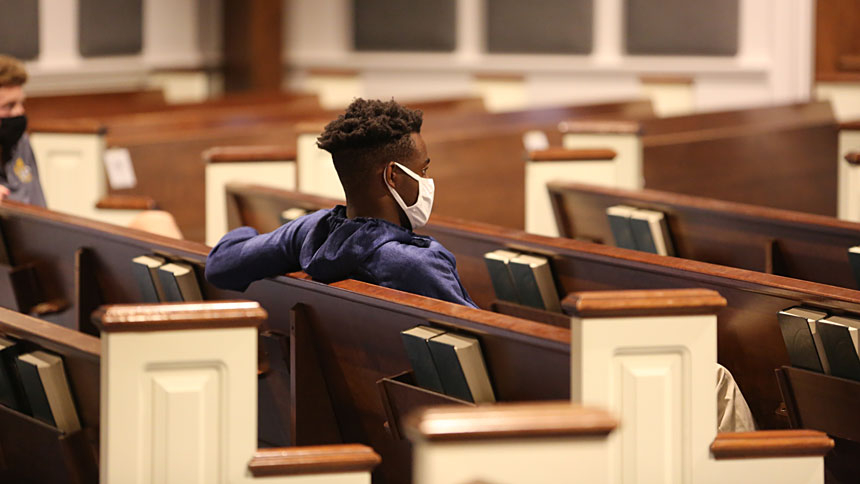 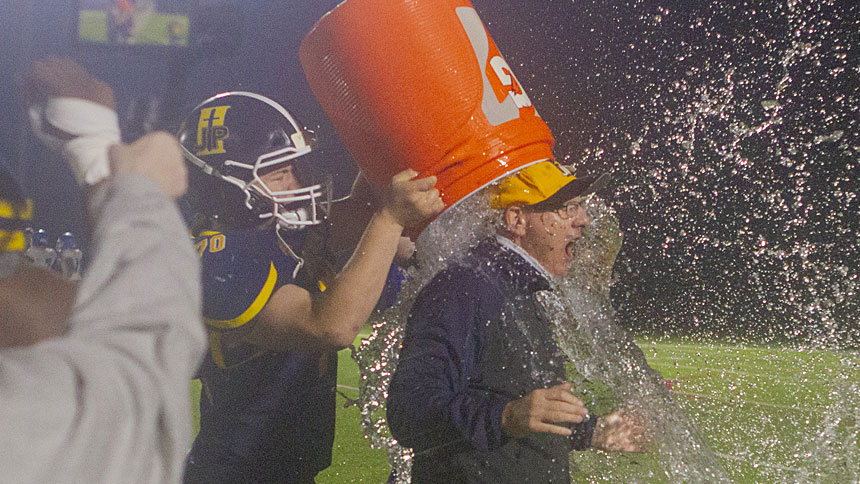 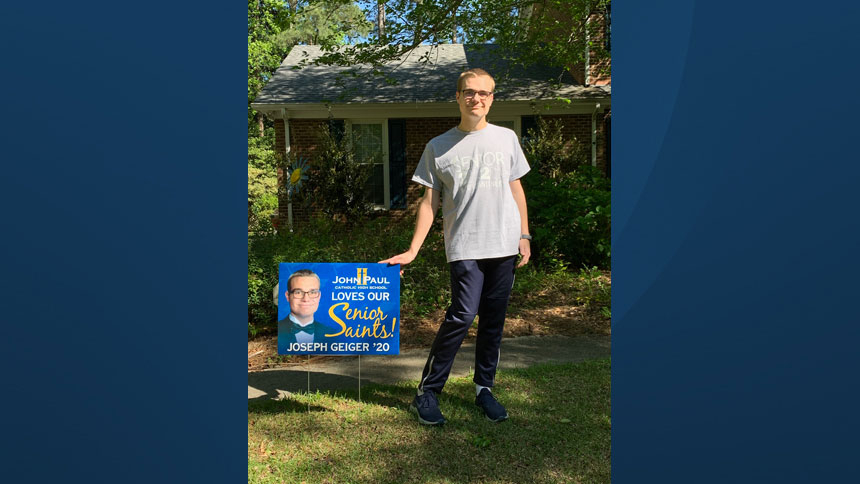 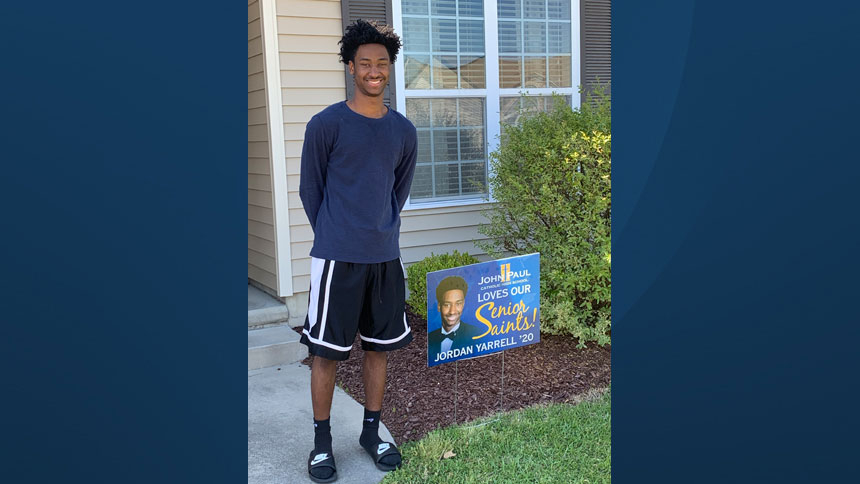