Faithful bid farewell to priest who 'had a mission' 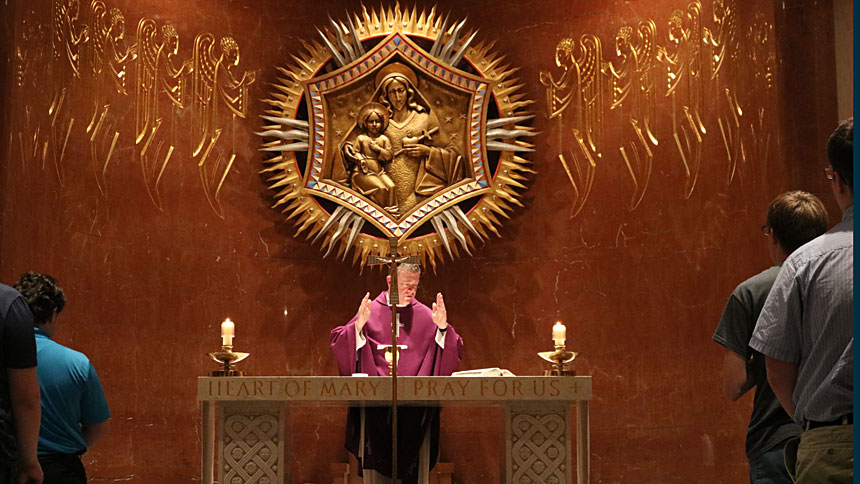 Monsignor Jeffrey Ingham understood that Father Philip Tighe didn’t want much said about him at his funeral. After more than 20 years of friendship, he respected that.

And so, Monsignor Ingham discussed the power of choices, such as the choice to follow the Lord. He talked about the completion of the Church. He spoke of how Jesus gave himself to humanity so that there was “no doubt about his love.” He mentioned how the day, Sept. 8, was the feast of Mary’s nativity. He smiled as he noted that his brother priest, with the middle name Marian, was devoted to Mary.

But Monsignor Ingham also knew that the people gathered inside Holy Name of Jesus Cathedral, and the thousands who watched the funeral on YouTube, wanted to hear about the life of their beloved Father Tighe, who died Aug. 31 at age 57 after a two-year journey with esophageal cancer.

“This much must be said. He was a man who threw himself into everything that he did. Totally. He had that wonderful combination of faith and the entrepreneurial spirit,” Monsignor Ingham said. “He had a mission, and nothing would stop him. Something that might not interest you or me would be something to which he would give his full attention. Whether it would be being a parish priest, a pastor, a builder, working in Hispanic ministry, in charge of the committee for the interior of this cathedral, or a vocation director, he was always looking for the next opportunity. The next challenge.”

That value of “mission” likely developed for him at an early age. The youngest of seven children, he was always trying to keep up and learn at a faster rate, said his brother, Bill Tighe. Phil earned his Eagle Scout rank at age 14, about three years earlier than most earn that distinction.

As a boy he enjoyed being outdoors and could often be found mowing the grass, raking leaves or fishing in a pond. His parents taught him to sail the family’s Thistle, a 17-foot racing sailboat with three sails that they’d take to Lake Norman and, later, to sea. The boat was fast because it had a lot of sail for the size of the boat, and it encouraged Philip’s competitive nature. It also encouraged an appreciation for mother nature.

“He loved seeing God’s gift of beauty out on the water. The fact that you’re under sail and there’s no power other than the power of the wind … when you’re out there in the ocean, sometimes you’re along for the ride,” Bill said about the experience.

Phil prayed the rosary with his parents, five brothers and one sister, and he volunteered as an altar server at Mass. As a teen, he played tennis and football at Pinecrest High School in Southern Pines, North Carolina. He also played the trombone in the band and was taught by his grandmother to play the piano.

After high school he went to The Citadel, the military college of South Carolina, where he studied business and graduated in 1985. After college he stayed in Charleston and worked for Merrill Lynch. He went on to earn an M.B.A. from the University of North Carolina at Chapel Hill in 1990 and worked for IBM for six years in Raleigh.

But he was hearing a calling to the priesthood. He began to consider that vocation, a different type of life. It’s something Bill said was always in the back of Philip’s mind and on his heart. In the late 1990s he began a new chapter in life as he began studies at Theological College at The Catholic University of America in Washington, D.C.

It was during his time as a seminarian that he first met Monsignor Ingham, who was Father Ingham at the time and pastor at Our Lady of Lourdes Church in Raleigh.

“He was affable, personable, confident … and he had a genuine piety and a great attitude,” Monsignor remembered. “He was a person of deep faith.”

He was ordained June 24, 2000 by Bishop F. Joseph Gossman at Sacred Heart Church in Pinehurst. Father Tighe’s first priestly assignment was at St. Michael the Archangel Parish in Cary.

As the Hispanic community in the Raleigh diocese began to grow, Father Tighe traveled to Bolivia for a two-year language immersion program so that he could return and better serve the faithful who spoke Spanish.

He worked in parishes and missions in Clinton, Rocky Mount and Wake Forest, where he served as pastor of St. Catherine of Siena Parish, and led the effort to build the new church building there. He served in Raleigh as pastor of the Doggett Center for Catholic Campus Ministry at N.C. State University.

“He was devout in learning the Catholic faith … and impacting so many lives through the gifts of the blessed sacraments,” said his brother Bill. “He was happiest celebrating Mass … and being with people.”

Many in the Diocese of Raleigh took to social media following Father Tighe’s death. By the hundreds, they commented on their love for him as a pastor and noted how he was a part of their faith lives, and present with them at sacraments such as baptism, the Eucharist and marriage.

Father Tighe’s presence was particularly important to the seminarians of the Diocese of Raleigh, a group he embraced in his position as vocations director for the diocese, a role he took on in 2016. As director he helped many to find their vocation, whether that was the priesthood or not, through prayerful discernment.

“Father Tighe was a priest of Jesus Christ, truly exemplifying the essence of sharing in Christ’s ministry as he constantly opened himself up to the will of God,” seminarian John De Guzman shared on social media. “Father Tighe was the man who, in my darkest moment as a seminarian, looked upon me with love, care and compassion as Christ would … [he] constantly strived to remain with the Lord in his earthly life.”

His love for Christ was evident to many, including his friend of four years, Zach Ryan.

“Our friendship was built on this search for Christ. To see where he was taking us,” Ryan said. “He was my pastor, spiritual director, ‘older brother’ … and one of my closest friends.”

Ryan recalled a time when he was discerning and joined Father Tighe for an anointing of the sick call. Ryan remembered a very sterile environment as they prayed, and an absence of friends and family. The situation weighed heavy on his heart, and the next day he opened up to Father Tighe about how the dying person was alone.

“I will never forget this. He turned to me and he said, ‘Alone? We weren’t alone. The room was filled. Every saint we called on during the Litany of the Saints was there,’" Ryan said. "And that is the strength, the guidance, the belief, the hope, the faith, the love that he had and how he revealed that to me in that instance … just by saying, ‘We weren’t alone.’”

Watch Monsignor Ingham share a homily at the funeral Mass.

Watch a video of Father Philip Tighe discussing what it’s like to let people see “the human side.”