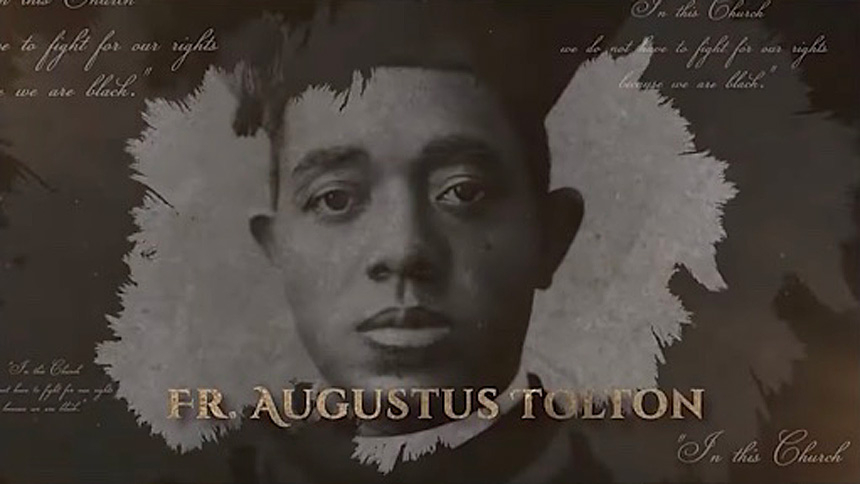 Despite living through the societal oppressions of racism and discrimination, Father Augustus Tolton’s legacy of hope and love for God teaches a message from which everyone can learn.

EWTN News Nightly recently interviewed Michael O’Neill, producer and host of “They Might Be Saints,” to discuss the remarkable life of Tolton — all arriving on the 125th anniversary year of his death.

O’Neill also shared his thoughts on the lasting impact and relevance of Tolton’s story today — particularly in a social landscape where many still contend with the effects of racism and discrimination.

Tolton’s childhood during the Civil War in the early 1860s was anything but ordinary. While his dad joined the Union Army during the war, Tolton’s mother — as well as he and his two siblings — also took quite a journey of their own.

“Father Augustus Tolton — ‘Gus’ as he was called as a youngster — he grew up in Missouri and he was a slave,” O’Neill explained. “But his mother, Martha Jane, took him and his two siblings and she crossed the Mississippi River amidst the gunfire of Confederate soldiers … [Arriving] on the other side, they landed in Quincy, Illinois, and that’s where he grew up.”

O’Neill explained how, while in Illinois, Tolton attended Catholic school, where he perhaps began to take a great interest in the idea of becoming a priest, eventually coming under the tutelage of two German priests in the area.

However, his journey to the priesthood would not be an easy one, as he was not seen as a candidate for seminaries in the United States due to his race.

“[The priests] tried to get him into every seminary in the United States and he was rejected across the board,” O’Neill described. “Nobody in America was ready for the first African-American priest … [Eventually], they sent him to the Sacred Congregation for the Propagation of the Faith in Rome … where he studied and was a highly popular seminarian … [going on to] be ordained in 1886.”

After ordination and graduating from the seminary, Tolton was more than ready to take on the missionary work that was to be entrusted to him — preparing to go to Africa by studying languages and cultures. However, a last minute “bait-and-switch” — as O’Neill described — took Tolton to perhaps one of the most difficult missions he could have faced.

“He ended up being sent back to Quincy, Illinois, where he had … grown up, where he had been bullied, where he wasn’t accepted … So he was brought back to perhaps the most difficult parish of all, mission territory right back here in the United States.”

While the world that Tolton experienced during his lifetime was one filled with racism and division, O’Neill pointed to the lasting legacy that Tolton’s life story leaves behind — especially in a modern world where many of those same obstacles still exist.

“Father Tolton is a Venerable … meaning that his life of heroic virtue has been established by Rome … [He’s the most recent] American to receive this honor, in 2019,” O’Neill said. “We know his life of virtue is fully established as being one who had great faith, hope, and charity … [even for those] who hated him and tortured him and persecuted him … I think he serves as a great example … that we’re all called to be saints and anybody can be a saint, and we’re all praying that [Tolton], with another miracle, will … move on to the status of Blessed in the Catholic Church.”

O’Neill said Tolton’s persistence in pursuing his vocation — despite facing obstacles and opposition from many sides — stands out as one of the most fascinating parts of Tolton’s life story.

“He was really dealt a difficult hand finding a vocation in his heart and not being able to actually enter a seminary in the United States,” O’Neill said. “I’m sure he was ready to move on from the United States … but then coming right back to the place where he had such difficulties, [he showed] us incredible fortitude … [He’s] a great person that we can look to as a model, as an intercessor, and perhaps we’ll see him as a saint someday soon.”

Watch the full interview below.