Faithful Gifts: The Church and relics of the saints 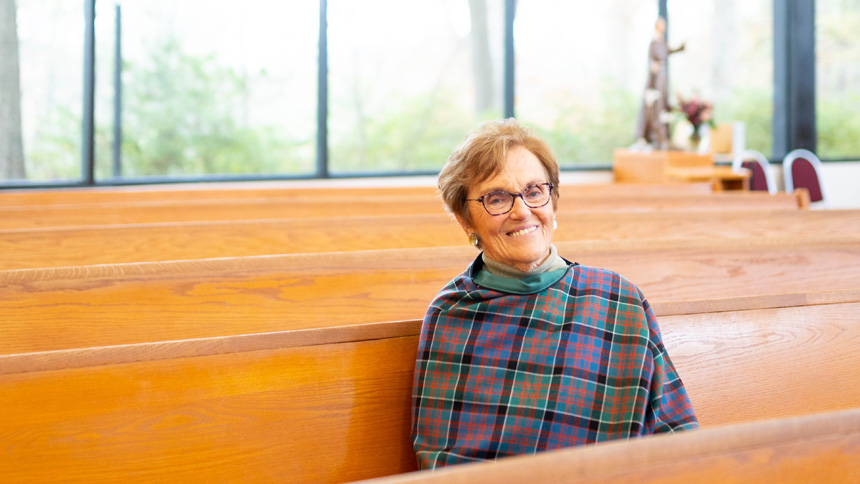 A series of glass-fronted display cases lines the back walls of the church and upper chapel at Our Lady of Lourdes in Raleigh. Each box contains at least one of 57 relics of the saints, their golden reliquaries aglow under recessed lights.

At the foot of the crucifix over the altar hangs a much smaller wooden box. It contains a relic of the true cross.

Father Pat Keane, pastor at Our Lady of Lourdes, says such relics can help bring us closer to God through the intercession of the saints.

“They have no power within themselves,” Father Pat said. “It’s not a lucky charm. It’s a way for us to be able to focus more on Christ.”

Across the ages, relics have been a focus of avid devotion for those who see them as a conduit for God’s miraculous interventions. Skeptics, on the other hand, question the validity of such miracles, and the authenticity of the relics themselves.

So how do we know if any relic, especially a microscopic fragment, is the real thing? And can a miracle really be achieved through a relic?

Just what is a relic?

To modern sensibilities, the idea of chopping off and displaying a holy arm or leg bone — or even a saint’s head, as in the case of St. Catherine of Siena — seems barbaric.  The centuries-long practice also seems contrary to the Church’s deep respect for human remains in light of the eventual resurrection of the body.

Today, dismembering the body of a saint is prohibited without the consent of the Vatican. And the practice of retaining physical reminders of the dead is not so unusual.  Many of us keep something — a lock of hair, an item of clothing or a piece of jewelry perhaps — as a physical connection that draws us closer to the memory of our loved one.

In essence, that is what “relic” means in classical Latin: “remaining; that which remains.”  The church defines three types of saintly relics:

Reverencing the saints through the use of relics is not a required devotion of the Catholic Church but does reflect the Church’s belief that the saints in Heaven continue to intercede for us in response to our prayers.  However, veneration of the saints through their relics — along with praying the rosary, wearing medals and going on pilgrimages — should not be misconstrued as adoration or worship, which are due to God alone according to the Church.

An ancient practice, for better or worse

The idea that physical objects can be channels of divine action is rooted in Scripture. For example, in Scripture a corpse tossed on the bones of Elisha came to life. The woman with a hemorrhage touched the cloak of Jesus and was healed. Contact with St. Peter’s shadow was enough to cure the afflicted. The faithful touched cloths to St. Paul’s skin, carried them away to the afflicted, and miracles occurred.

The early Christians also reverenced the physical remains of the holy ones among them. Under persecution, they worshiped God in secret in the catacombs among bones of the faithful. Around 156 AD, fellow Christians rescued the bones of St. Polycarp — “more valuable than precious stones and finer than refined gold” — from the smoldering ruins of the pyre on which he was martyred. They laid the bones where the faithful could gather to honor the saint.

Once Emperor Constantine legalized Christianity in 313, veneration of relics flourished publicly. The faithful opened the saints’ tombs, dispersed relics, and built shrines to hold them. In 787 the Second Council of Nicaea declared that every church altar should contain a relic, on pain of excommunication. This requirement remained until 1969.

Not surprisingly, the popularity of relics led to abuse. In the Middle Ages, relics were bought and sold and even counterfeited. In an attempt to curb false devotion, the Fourth Lateran Council in 1215 condemned the sale of relics displayed outside a reliquary, or container. This may have led to the partitioning of saints’ relics to fit small spaces. The Council also stated that new relics should be authenticated by the Holy See before they could be publicly venerated.

Despite these efforts, in 1543, John Calvin claimed in his Treatise on Relics that if all the pieces claimed to be the true cross were collected, they “would form a whole ship's cargo.” Recognizing the problem, the Council of Trent (1545-1563) upheld the veneration of relics, but again condemned their sale or abuse.

Today, the existing Code of Canon Law, derived from the Middle Ages, continues to forbid the sin of simony, the sale of relics. Despite this, eBay and other retailers offer a host of relics for sale, many of which come from shuttered churches or personal estates. Some retailers circumvent the Church’s ban by selling the reliquary. The accompanying relic is “free.”

Ancient historians write that around 336 AD, in a rock cistern, St. Helena found three crosses and the INRI plaque Pilot had placed on Christ’s cross. To identify which plank was Christ’s cross, a dying woman touched each, and on touching the third, was cured.

Such traditions, along with chains of possession, underpin the devotion of ancient relics like that of the true cross, crown of thorns and shroud of Turin. Authentication required after the Fourth Lateran Council was further bolstered following the Council of Trent, when St. Charles Borromeo codified the guidelines for proper storage and authentication of relics.  These were standardized in the 1700s and largely exist today.

As a result, relics must be accompanied by a certificate of authenticity, usually in Latin, signed by the issuing religious cleric and marked with their official seal. Cloth threads hold the relic in place and are stamped with a wax seal matching that on the certificate. The seal and threads should remain unbroken. Relics lacking an authentic certificate and accompanying seals cannot be displayed publicly, though they can be used for private devotion.

Most Catholic church altars are embedded with relics. Eighteen are set in the main altar and chapel altar of Holy Name of Jesus Cathedral in Raleigh. Many parish churches host additional relics for veneration. At St. Catherine of Siena in Wake Forest, the church walls are lined with ten altars honoring individual saints; many also contain relics. Our Lady of Perpetual Help in Rocky Mount has first class relics of Saints Jacinta and Francisco Marto, the Fatima visionaries; while St. Therese in Wilson has a first class relic of Saint Therese of Lisieux.

At Our Lady of Lourdes, most of the relics came from the estate of Father JaVan Saxon, who died in 2021. The rest were donated, handed down through families or other chains of possession.

Anne Killion donated the relic of the true cross. Her uncle, Monsignor Thomas Smiddy, vice-chancellor of the Brooklyn diocese, held the relic, which passed to her aunt on his death. Eventually, Killion received a box of family items that she stored in a closet without opening.  Clearing out years later, she opened the box and found a stained envelope containing a certificate, handwritten in Latin calligraphy on parchment. Though unable to read Latin, Killion made out the word “crucis,” or cross.

With the certificate was a small, tarnished, silver cross, which she thought would make a nice piece of jewelry.  While cleaning the cross, a small screw came loose, so she opened the back. Inside she found another, smaller cross.

“I turned it over and there’s a thin red cross of threads on the back, an X,” Killion said. “There’s a seal inside. It was clear, but it was framed in silver. I said, ‘This is something; I don’t know what this is!’”

She took the relic to Father Pat, who had it authenticated by Father Carlos Martins, director of Treasures of the Church, a ministry of traveling relics. Killion donated the relic to Our Lady of Lourdes, where it is now honored at the foot of the crucifix.

What about those miracles?

As for miracles, Father Pat insists that “all healings come from God.”

“If you’ve got inoperable cancer, yes, pray to God, but if he is going to heal you, 99 times out of 99 it will likely be through a human being,” Father Pat said. “Sometimes he steps outside of that and you get miraculous healings.”

Father Pat recommends practicing a devotion to the saints, but says venerating relics is like using the resources in a library.

“You don’t have to read a single book in there.  But there’s stuff in there that can make your life better,” he said. “You don’t have to have a relationship with the saints of God, but we believe in the Communion of Saints, and it’s not just in Heaven.” 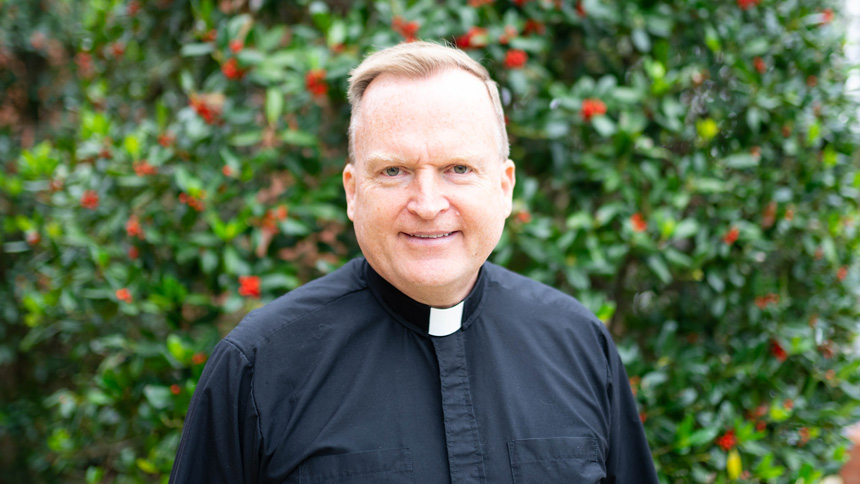 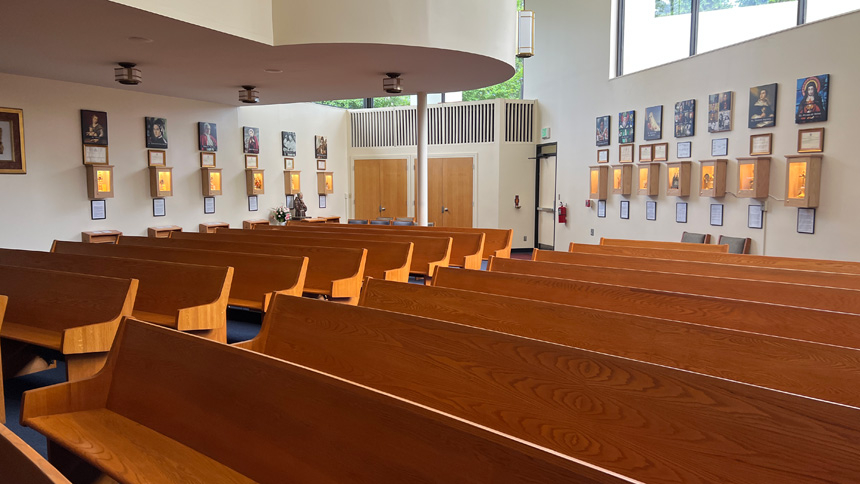 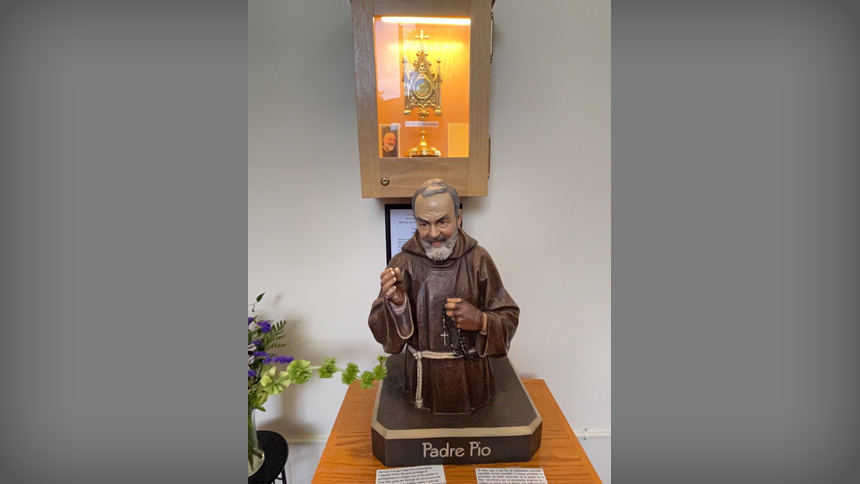 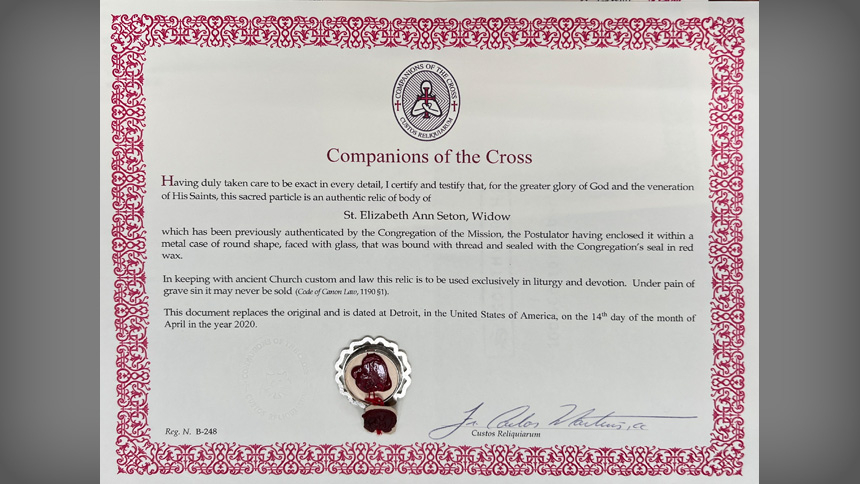 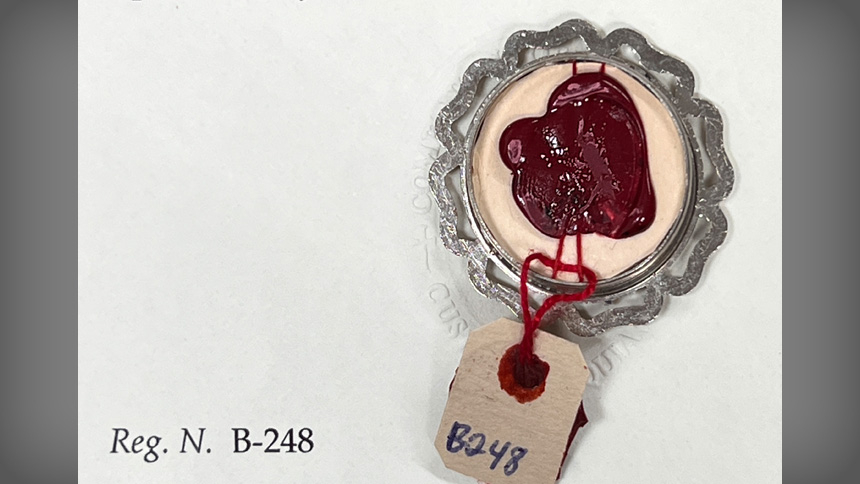 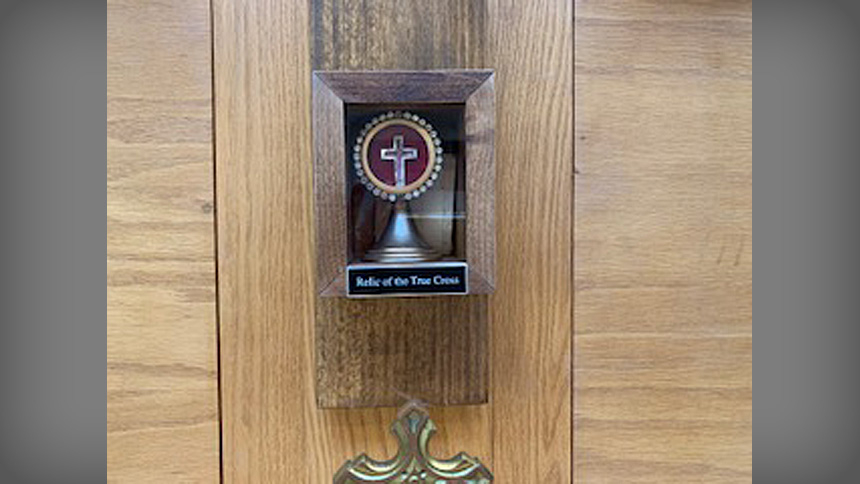 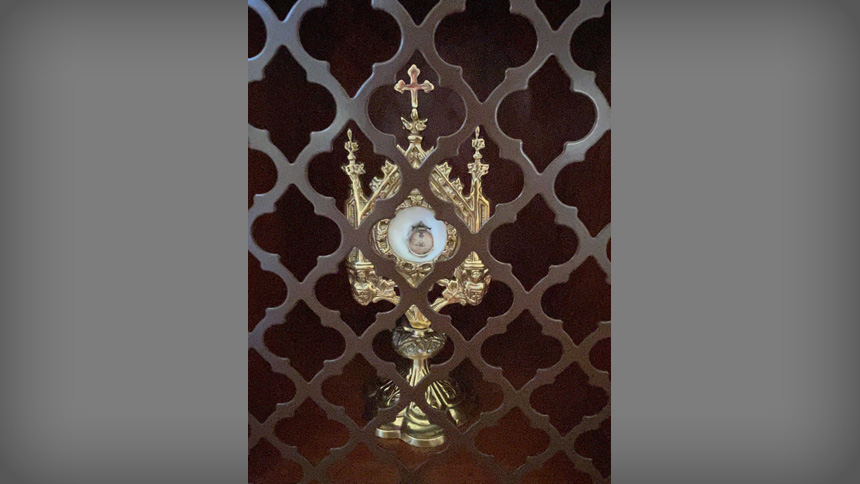 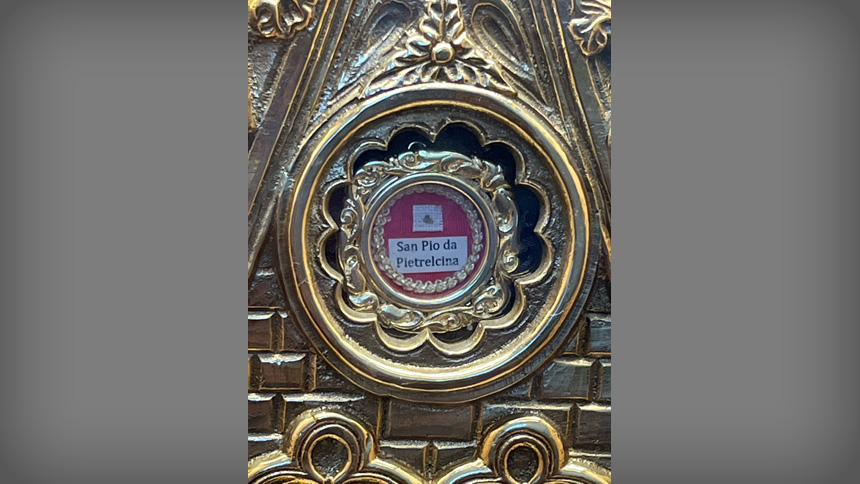 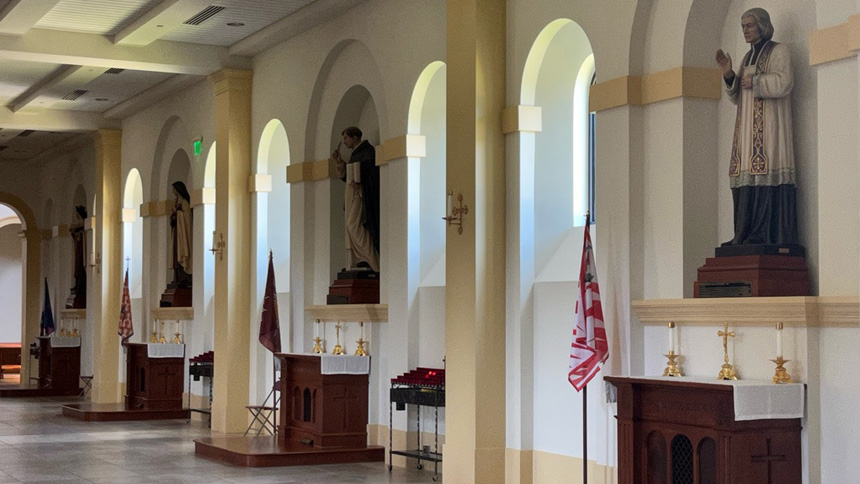 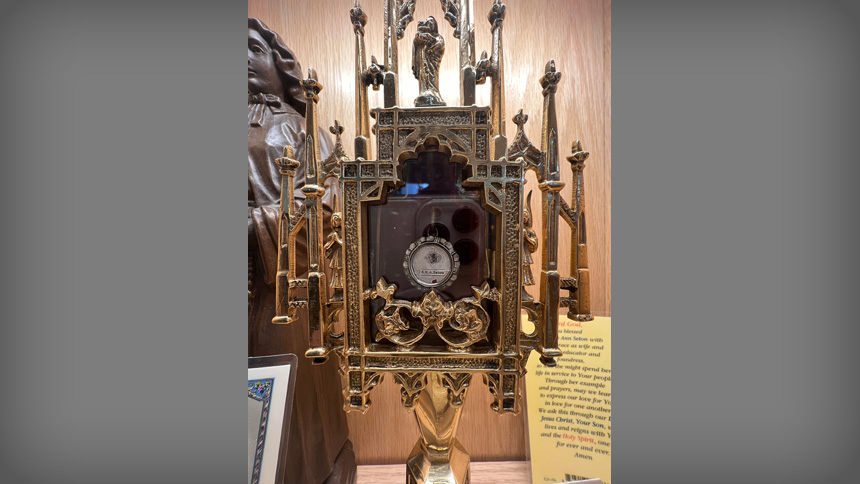 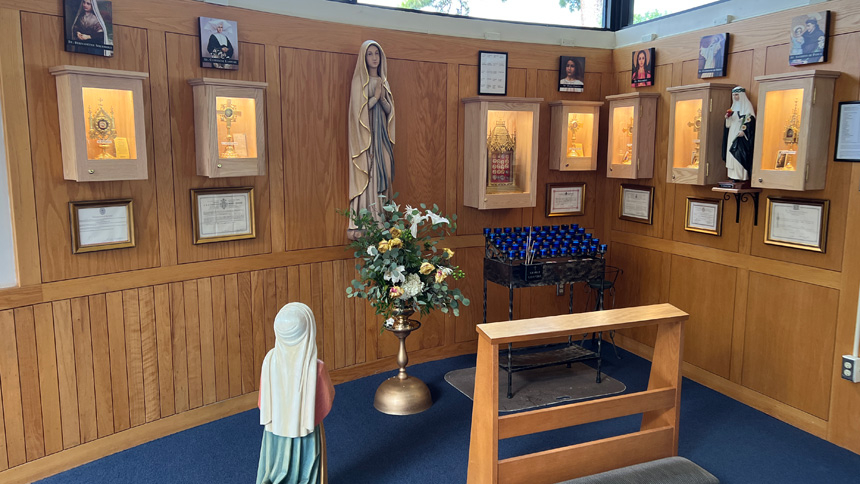 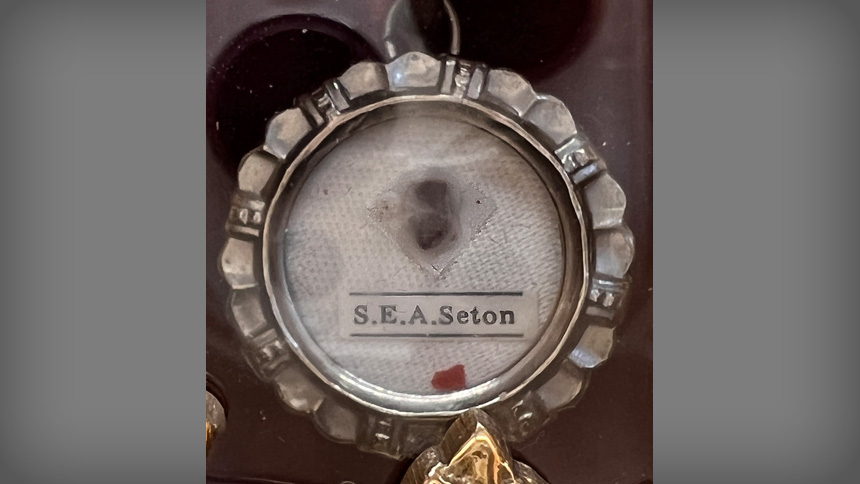