Advent: Allowing ourselves to be bathed in the light of heaven 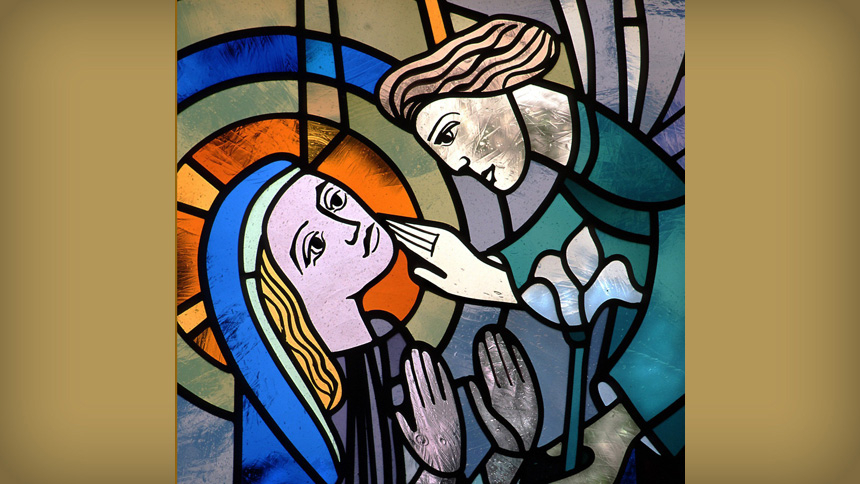 Above: In this church window depicting the Annunciation, the angel Gabriel appears before Mary to proclaim that she is to be the mother of Jesus. The window is from St. Mary's Church in Willmar, Minn. The hymn, "The Angel Gabriel From Heaven Came," focuses on the Annunciation. (CNS photo/Crosiers)

I love the hymns that accompany us through the Advent season. A term I sometimes hear used for them is “haunting.”

Some are played in minor keys, which fills them with a special mystery, a particular kind of longing. I think “haunting” is such an appropriate word as the earliest usage of the word “haunt” meant “place frequently visited” in the noun form and “to practice habitually … take part in.”

There’s a sense of returning home, to the origins of our faith, to ourselves.

One song that particularly speaks to the origins of our story as Christians is adapted from an old Basque hymn, “The Angel Gabriel From Heaven Came.”

I remember first hearing this song during an Advent concert in our church as a child, and it was indeed haunting, a place I wanted to inhabit, a place I still sometimes return to in memory.

In “The Angel Gabriel From Heaven Came,” poetry, like a gilded thread, is interwoven with longing for Christ’s coming.

The hymn focuses on the Annunciation, the moment Gabriel greets Mary and invites her to become the mother of God. In the first verse, he is presented in mysterious, yet vivid terms:

“The angel Gabriel from heaven came, / His wings as drifted snow, his eyes as flame; / ‘All hail,’ said he, ‘Thou lowly maiden Mary, / Most highly favored lady,’ Gloria!”

Hearing his wings described as “drifted snow” makes me think of a creature larger than life, incredibly glorious, but also one that is not “tame” in the most Narnian sense of the word.

The juxtaposition of cold and heat, and the intensity of light that emanates from both snow and flame highlight the difference between Gabriel and the “lowly maiden Mary,” who is, by the mystery of God, the favored one.

“Most highly favored lady” is repeated as the last line in all four verses of this song, which takes us through Gabriel’s message, Mary’s fiat and then into our own time. Mary’s yes to God’s vision for carrying and bearing the One who has come to redeem all mankind is worth pondering over:

“Then gentle Mary meekly bowed her head, / ‘To me be as it pleaseth God,’ she said, / ‘My soul shall laud and magnify his holy name.’ / Most highly favored lady, Gloria!

Mary’s fiat offers us a spiritual light by which we can see the glory of preparing him room. At this moment, she agrees to carry “the light (that) shines in the darkness,” the One of whom we can say “and the darkness has not overcome it” (Jn 1:5).

Bathed in the heavenly light of Gabriel’s presence, Mary makes her Magnificat, a promise to make ever larger for us “the true light, which … was coming into the world” (Jn 1:9).

From this haunting hymn comes the greatest truth — God makes a home in Mary, and she in turn intimately takes part in his life in her.

As we enter this Advent season, we are called to rediscover our truest home — in Christ, the one who wishes to make his home in each of our hearts. In a world where hope is often a precious light to which we must accustom our eyes, the truth contained in the final verse of this hymn burns as brightly as an ancient star:

“Of her, Emmanuel, the Christ, was born / In Bethlehem, all on a Christmas morn, / And Christian folk throughout the world will ever say / ‘Most highly favored lady,’ Gloria!”

Perhaps we cannot quite grasp the immense illumination the Annunciation contained — the almost blinding brilliance of Gabriel and the deeply enkindled heart of the Virgin, but this hymn bears witness to the fact that we are all called, like Mary to “laud and magnify His holy name.”

We honor the “most highly favored lady” who desires to lead us into the brilliant light of Christmas by carrying Christ our light into the world.

Enjoy this playlist of Advent hymns from the Sunday 7pm Choir at St. Francis de Sales Church in Ajax, Ontario, Canada. The hymn in the article above is number 9 in the playlist.