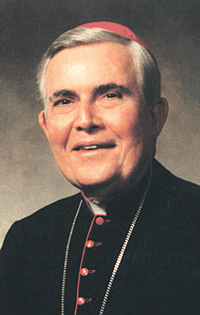 The Diocese of Raleigh served 52 Eastern counties. Bishop Waters died from a heart attack in his residence in 1974 at the age of 70. His positive impact would forever change the negative consequences of segregation on the Catholic community in North Carolina. Even with the many obstacles created, and with the drive made to bring the African Americans who left during his tenure back to the Church, he began a movement that was necessary to the future of unity within the Church.

Francis Joseph Gossman was born on April 1, 1930, to Frank and Genevieve Gossman in Baltimore, Maryland. He attended Saint Charles College in Ellicot City, Maryland and Saint Mary’s Seminary in Baltimore. He earned his bachelor’s degree in 1952, and continued his studies in Rome at the Pontifical North American College. Bishop Gossman was ordained a priest in Rome on December 17, 1955, and earned a Licentiate in Sacred Theology from the Pontifical Gregorian University in 1956.1

In 1956 Bishop Gossman was ordained to the priesthood. This was the same year that Monsignor Hadden, the first African American candidate for the priesthood was studying at the North American College in Rome. In 1959 Gossman received his doctorate in canon law from the Catholic University of America. At the Basilica of the Assumption in Baltimore he was assistant pastor and served as vice-chancellor for the archdiocese until 1968. Joseph Gossman was raised to the rank of Monsignor on June 27, 1965. In 1968 he became administrator of the Cathedral of Mary Our Queen in Baltimore.2

On July 15, 1968, Gossman was appointed Auxiliary Bishop of Baltimore and Titular Bishop of Aguntum by Pope Paul VI. He was ordained by Cardinal Lawrence Sheehan with Bishops Thomas Murphy and Thomas Mardaga serving as co-consecrators. On April 8, 1975, Gossman was named the fourth bishop to the Diocese of Raleigh. During his tenure, the African American community in the diocese would see more advances with the creation of the Commission for the Black Ministry. This ministry would later become the African American Ministry and Evangelization Network. It was formed in hopes of fulfilling the priority of outreach to African Americans.

Although Bishop Gossman did not understand the geographical and cultural diversity of his diocese when he arrived, he was well-prepared for the task at hand. His years spent in Baltimore had been during a tumultuous time in American history. In 1963 Bishop Gossman participated in the March on Washington with Dr. Martin Luther King, Jr., and issued a strong pastoral letter on racial justice stating that discrimination has no place in the Church.3 The support from Bishop Gossman to Monsignor Hadden would be long-standing and remains an important part of the diocese today. All this occurred while Monsignor Hadden became the first African American rector of a cathedral.

Bishop Gossman traveled across the territories of North Carolina to witness the problems firsthand. During his travels across North Carolina, Bishop Gossman realized the extent of the problems he inherited. His respect for the work Bishop Waters had begun was evident in that he, too, sought unity for the Church.4 However, his concerns lay with the fact that so many African Americans had left the Church. There was always the understanding that people left as a result of feeling unwelcome in white parishes, but Bishop Gossman realized there was a larger issue here and was determined to make things right. The African American community did not have much representation in the diocesan offices. Therefore, Bishop Gossman appealed to the Senate of Priests within the diocese to list their perceptions of problems within the diocese including the African American community.5 The study he had called for was finished in May 1978.

Since then, the AAMEN Office has worked toward evangelization to share the good news of Jesus Christ by encouraging all to see the gospel message. The Black bishops of the United States Catholic Conference of Bishops, in their pastoral letter, What We Have Seen and Heard,7 said that evangelization is both a call and a response. The call of Jesus reverberating down through the centuries is, “Go into the whole world and proclaim the good news to all creation” (Mark 16:15). The response is, “Conduct yourselves, then, in a way worthy of the gospel of Christ” (Phil. 1:27). Evangelization means not only preaching but witnessing; not only conversion but renewal; not only entry into the community but the building up of the community; not only hearing the Word but sharing it.