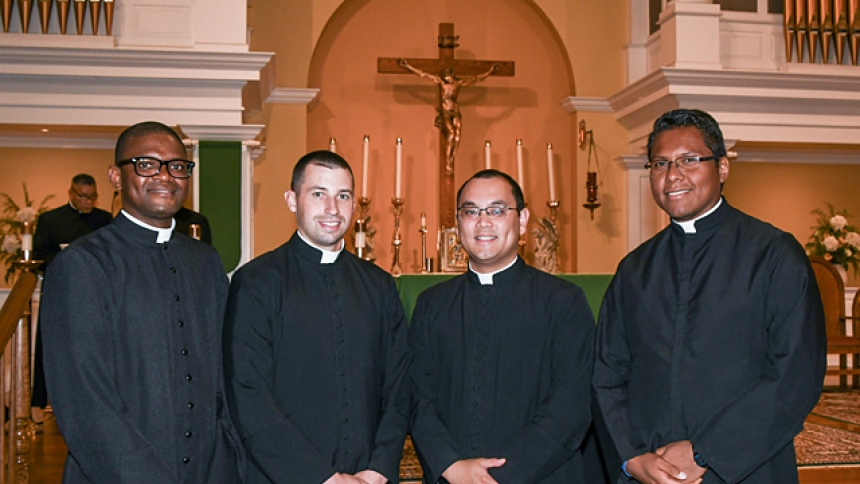 (Left to right) Seminarians Matthew Nwafor, Kyle Mummert, John de Guzman and Erik Reyes took one step closer to the priesthood at the rite of admission to candidacy Aug. 2.

Seminarians John De Guzman, Kyle Mummert, Matthew Nwafor and Erik Reyes declared their intentions to pursue holy orders at a rite of admission to candidacy Mass at St. Michael the Archangel Church in Cary on Aug. 2.

The rite of admission to candidacy is the first of five rites of passage for seminarians discerning the priesthood. In this rite, the seminarians, having achieved the necessary qualifications, publicly state their desire to, one day, become priests. Bishop Luis Rafael Zarama celebrated Mass and accepted the four as candidates.

In his homily, the bishop noted that the readings during the Liturgy of the Word could not have been more perfect for the occasion. He referenced Jeremiah 18, the story of the potter and the clay.

“How open have you been to let Jesus mold you? How resistant have you been?” Bishop Luis Rafael asked the four aspiring candidates. “Jesus will be with you always, to keep molding you in his image.”

The bishop told the four men that, during their time in seminary, they should focus on the beautiful relationship that Jesus wants to have with them and that they should ask themselves how free they feel to answer, “Yes, every day,” to God.

After the homily, De Guzman, Mummert, Nwafor and Reyes were called by name to come to the altar and accept their candidacy.

One-by-one, they answered the call and replied, ‘present.’ More than a literal acknowledgement of their presence, the word carried a weight that called to mind the beautiful gift of vocation. Facing the altar, supported by more than 20 diocesan priests to their left and nearly 20 brother seminarians on their right, the seminarians said yes.

After Mass, priests, seminarians and the candidates’ families were invited to the St. Michael Parish Center for a celebration dinner and fellowship.