Why the world needs #BreviaryViews 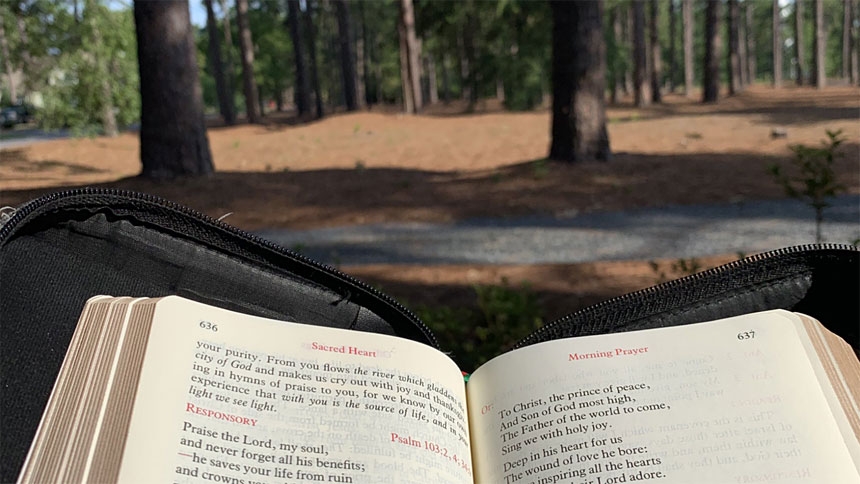 Originally published on Angelusnews.com, the multimedia news platform of the Archdiocese of Los Angeles.

For centuries, it’s been known as the Roman Breviary, the “Breviarium Romanum” in Latin, and the prayer of the Church, the “Liturgy of the Hours,” was once reserved for use by ordained or consecrated men and women, but now it’s a spiritual weapon available to all.

So why don’t more people use it? Well, now — as there seems to be for everything — there’s a hashtag for that, and it might be becoming a little trend.

The truth is, the world needs more Catholics to pray the Liturgy of the Hours.

I’ve never been more convinced of this as I was last Sunday morning, when we woke up to hear about a second mass shooting in less than 24 hours.

These words appeared in the Office of Readings portion of the Hours, in a letter attributed to St. Barnabas: “When evil days are upon us and the worker of malice gains power, we must attend to our own souls and seek to know the ways of the Lord. In those times reverential fear and perseverance will sustain our faith, and we will find need of forbearance and self-restraint as well. Provided that we hold fast to these virtues and look to the Lord, then wisdom, understanding, knowledge and insight will make joyous company with them.”

Not only could the words have been written that morning to give us timely good counsel, but it was hard to miss that the writer was among the first apostles of Christ, someone who lived and worked and taught with St. Paul, who helped make St. Paul who he became: a convert and soul catcher after his life of slaughtering Christians.

At a time when society seems unmoored and so many seem to wander with a kind of post-traumatic stress disorder from the overwhelming violence and anger that can wear you down and tempt despair, the Acts of the Apostles does seem like exactly the kind of book to turn to, considering the intensity of the challenges and the witness of the kind of love we are all called to.

And as it happens, earlier this summer, John De Guzman, a seminarian from Raleigh, North Carolina, studying at the Theological College at The Catholic University of America in Washington, D.C., was inspired to start tweeting about the Liturgy of the Hours. He was sitting with his breviary book with the prayers and tweeted a photo of his peaceful-looking view of not only the prayers, but trees. All @JohnDeGuzzy had to do was add the hashtag #BreviaryViews to bring a little peace to Twitter and establish a community.

“What surprised me the most was how a simple hashtag became a place of encounter, both with fellow Christians and with God,” De Guzman explained.

“What started off as just a fun little social media hashtag turned into a place where people felt the grace of God inviting them to grow in their spiritual life. People who have seen the hashtag, not only have joined and shared their views and experiences with the breviary, but they have also been moved to pray and to encounter the Lord as they strive to grow in and deeply develop their spiritual lives. That’s just so stunning to me.”

Not only are people sharing their prayer — and what’s surrounding them as they pray — but they are helping one another out.

Catherine Addington is a Ph.D. student in Spanish at the University of Virginia. As @caddington11 on Twitter, she saw De Guzman’s hashtag taking off and noticed that Pauline Books & Media was having a sale. There is both a shorter version of the Office and the complete four-volume set (though there are apps for that, too, if you want to pray it from your phone).

When Addington decided to offer to buy one for anyone who could not afford the book, she wound up with more requests than she could fulfill. So she developed a breviary sponsorship opportunity on Twitter, connecting people who want to start praying the Liturgy of the Hours and others who would like to help them by gifting them the one-volume or four-volume versions.

Addington first became familiar with the Divine Office because of friends going into religious communities. “I try to pray morning and evening prayer daily, and I’m working on adding night prayer. Sometimes I’ll add the Office of Readings, too, especially if it’s a feast day,” she said.

“I love to pray the Liturgy of the Hours because its structure helps me to check in with God throughout the day. I think of the hours as holy interruptions that break through my busy schedule to remind me of the One who should be the most important priority in my life, the One whom it is so easy for me to forget about without that structure. “

That’s especially true in the U.S., where work schedules can be too unforgiving and priests too scarce to make daily Mass a practical option for most lay people. As a result, it’s easy to feel like the Church consists of 24/7 collars and habits that you only get to pray with on Sundays, and that can only lead to more alienation and sadness.

It seems like a small thing, but praying the Liturgy of the Hours — as much or as little as your state in life allows — is one way of bringing the whole Church together in prayer, and reminding ourselves that we are a vital part of the Church, living the liturgical year as one body. But it is also a great way to gather community together physically. It’s a built-in structure for household prayer, whether as families, roommates, or religious communities.”

If you do find yourself with screen fatigue or social-media addiction, praying the Liturgy of the Hours by the physical book in short or long form is an advisable way to go, if plausible. Many who pray the Office as a way of life, however, find the apps practical when traveling. (I have two that I use: DivineOffice.org and iBreviary.) But there is definitely a little more breathing room to prayer without the screen.

I must confess, though, that while I often share my praying of the Liturgy of the Hours — usually with an image capturing the beauty of creation and a #morningprayer or #middayprayer or other applicable tag, I sometimes feel a little guilty about it. Doesn’t Scripture teach us to have some modesty about our prayer, not doing it on street corners and all? The #BrievaryViews engagement seems a reminder to make use of all media to share the good news.

Praying the Divine Office can be complicated, difficult, and confusing. (A recommended resource is Father Timothy Gallagher’s new book written to help lay Catholics experience the richness of praying the Office with consistency and faith.) But praying it helps to convince our soul of God’s providential care for us, that he really does have a plan for each one of us and for human history stretching into eternity. And it can encourage our faith even in the midst of what can be suffocating darkness.

Which is why I found myself tweeting again from Barnabas on the Monday after the shootings. There he was again in the Office. “We must flee from all vanity and show an utter hatred for the deeds of the evil way. Do not turn inward and live only for yourselves as though already assured of salvation; join together rather and seek the common good.”

That morning, Barnabas also gave me all the confirmation I needed to keep tweeting in the spirit of #MorningPrayer or #BreviaryViews with this line: “Share your food with the starving.”

One of those Liturgy of the Hours apps, iBreviary, always includes this line from Hebrews 3:13: “Encourage each other daily while it is still today.”

Which I take to mean: Twitter can be a little bit of a community life, if it draws us closer to God and one another. Kudos to Guzman and Addington for helping make it so. Now let’s get praying — tweeting or not!