Why her? Durham sister reflects on 65-year jubilee 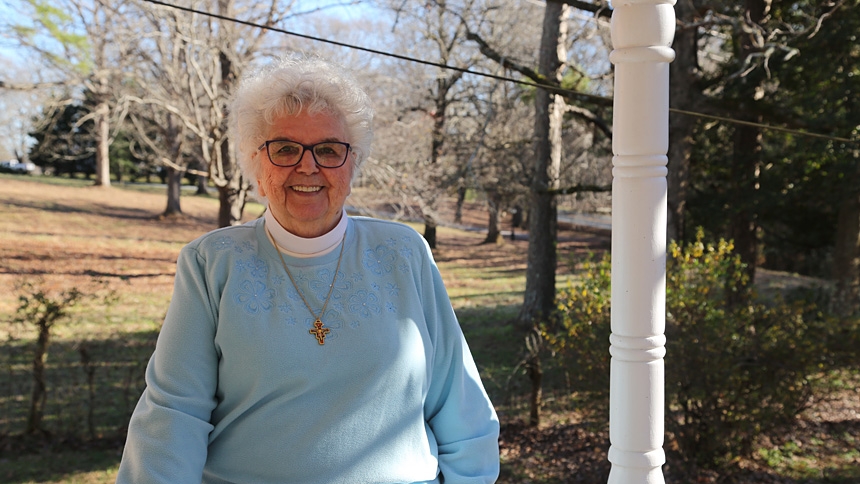 Above: Sister Damian Jackson, O.S.F., 87, stands on the porch of her Durham home near Avila Retreat Center, where she served as director for three decades. This year Sister Damian celebrates her 65th jubilee.

Helen Jackson was, admittedly, a little surprised. The Sisters of St. Francis of Philadelphia had answered, “yes” to her request to join their convent. It was Baltimore in the early 1950s and Jackson, the oldest of four children, was feeling more “alive” than “holy” as she approached her 20s. She enjoyed clubs and dancing, and was engaged for a time. Her acceptance letter seemed even more unlikely when she learned that two friends, whom she presumed to be shoo-ins, weren’t offered the spots they sought.

She wondered. Why her? It’s a question she hasn’t stopped asking herself even 65 years after she professed vows.

NC Catholics sat down with Sister Damian (her chosen name) Jackson, O.S.F., M.A., in January to discuss grace and vocation.

NC Catholics: Tell us about your childhood.

Sister Damian: I lived in the city … Baltimore … in a row house. Two sisters and a brother. My mother stayed at home, and my father – I guess you would call him a mathematician. I went to grade school at St. Paul and to The Catholic High School. The sisters of St. Francis of Philadelphia ran the schools. Joe Gossman (who would be ordained a priest and become bishop of Raleigh) grew up about 15 minutes away from my neighborhood. I met Joe my junior year of high school.

NCC: What was life like after high school graduation?

SD: I was engaged (to be married) for six months. I worked for the Baltimore Gas and Electric company. I thought about becoming a nurse. [But when] I closed my eyes and tried to picture myself in the future, all I could see was me standing with this habit in front a blackboard.

NCC: How did  you begin to discern a vocation?

SD: God spoke to me in words of others who recognized the signs of a vocation before I did. I broke the engagement. By the time I took my first vows [at the convent] I knew I was going to go into final commitment.

NCC: Who was your first teacher when it came to faith?

SD: My mother taught me the love of God. Not in preaching, but by how she lived. If she were talking to a child, the only person present in the whole room of people would be that child. The eye contact. The importance of the other person. You know? Listening. She taught me how to be an active listener.

NCC: During your early years as a sister, where did you work?

NCC: Do you have any fond memories of those early days?

NCC: What prepared you for education ministry?

SD: I received a B.S. in education from Villanova. And a M.A. in religious studies from St. Charles Borromeo in Philly.

NCC: You served at Avila Retreat house in the Diocese of Raleigh for decades. How did you switch from education in the northeast to retreats in the south?

SD: It was evident to me in 1978 that God had other plans for me. I was invited to our mother house to direct sisters’ retreats. In 1983, I said ‘yes’ to coming to Raleigh. I served as director at Avila until 2013.

NCC: How have you spent your time since you left Avila six years ago?

SD: You don’t retire from the sisterhood. I thought, ‘What am I going to do? That’s a pretty tough question.’ And I named my new ministry my Ministry of Presence.

NCC: What does that mean, a Ministry of Presence?

SD: Being ready and willing to respond to the needs of others as they are presented to me. For example, spiritual companion. People come here to my home. We have a cup of coffee or tea and share, pray or listen to each other. I spend a lot of time visiting the sick. And, today, after you leave, I am taking Communion to a woman in hospice care. Over three years, we have become very close as friends.

I read somewhere that God made us because he loves stories. I hope God loves my story.

NCC: What is one of your favorite hobbies?

SD: I write poetry. It’s meaningful to me. Would you like to hear one?

SD: (Finds the written poem and reads) I wrote this while I was on a retreat in Maryland:

The water ripples, the result of hydrogen oxygen attraction

And carries me to another space with its gentle soothing waves.

The sounds of the waterfall delights my ears and the chirps of birds add to its unique sound.

They are so in sync …

Goldfish are shining, hiding under the water …

All creation does vibrate with energy, design and music. The least we can do is hum along