What makes a family? 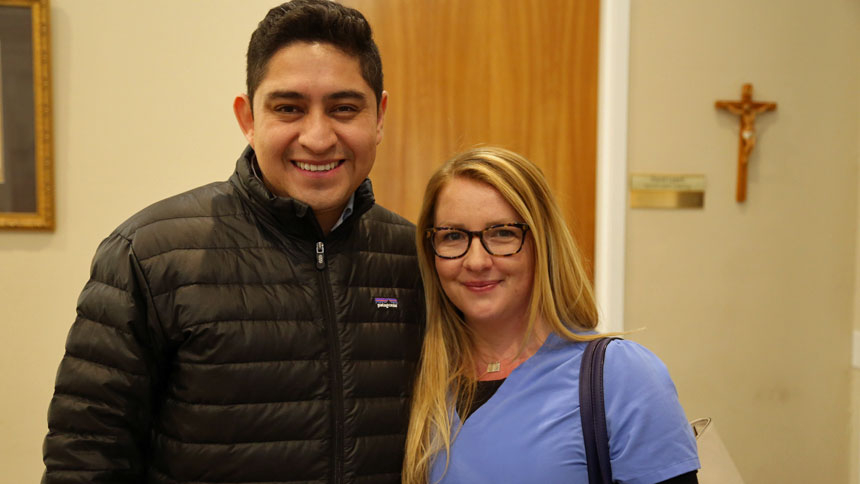 Diana and Hector Castro were excited to start a family. Married and settled in Cary, the young couple looked forward to pregnancy and family life. But things didn’t go according to their plan.

The couple had family members who had adopted children. From the outside, they saw the many difficulties that adoptive parents face. For Hector, the idea of adoption was hard to embrace.

“It was hard for me to imagine that someone who didn’t come from the womb of your spouse, that that was your kid,” he said.

Unsure of what to do, the Castros listened to the advice of their doctor and started exploring medical interventions.

During this time, Diana was called on by the Orphans, Adoption & Foster Care ministry in her parish.

“My sister and I are both Russian, and this ministry was hosting girls from the Ukraine and families who didn’t speak the language,” Diana said. “They asked if we could come and act as translators, and I said, ‘sure why not?’”

They didn’t know it at the time, but that small ‘why not’ was the catalyst that would forever change Diana's and Hector's lives. And it was just the beginning of their journey with the OAFC ministry.

Founded in 2017 by St. Michael parishioners Tara Mylenski Arhab and Janet and Paul Kazmer, the OAFC ministry provides information on adoption and foster care, offers ongoing support for families who have adopted and encourages people to engage in hosting opportunities and mission trips.

Arhab says she was inspired to start this ministry because of the obstacles she faced after adopting four children from Ukraine.

“A lot of people are there to help you know how to adopt, but once you adopt, there’s not a lot of resources out there. Supporting [families who adopt] is a major goal for this ministry,” Arhab said.

The Kazmers journey was different, but they, too, quickly realized that, when they had struggles, they weren’t sure where to turn.

They had three biological children when they decided to adopt their youngest child from Russia.

“When we brought our son home, we had some challenges. We couldn’t tackle it at the time, but we knew we wanted to eventually do something to support adoption,” Paul said.

While in Russia, they became friends with another American couple who had adopted. Over the years, the long-distance friendship remained intact. Janet learned about a ministry that the other couple had in their church.

“They do educational events and have a support group of adoptive moms sharing their experiences and stories. I just thought how wonderful that would be because it [adopting] was really kind of isolating. I was trying to connect with other people, and there just wasn’t really a good means for doing that,” she said.

They didn’t know each other yet, but at almost the exact same time, Kazmer and Arhab reached out to Deacon Mark Westrick, the director of social ministries at St. Michael. Westrick connected the two of them and, after many coffee dates and conversations, OAFC was formed.

Diana and Hector had already given a down payment to their doctor. But as the days passed and they spent more time with the girls from Ukraine, they started rethinking everything.

“Our doctors were really pushing for one way; we didn’t want to do it but felt like it was our only option. And then these kids are here, and they don’t have anybody, and here we are trying to force something when there is someone right there,” Diana said.

Every night, when they went to bed, they discussed their options.

But Diana says she’d turn to Hector and say, “You always say God will provide. How is this any different?”

Hector nods and laughs, “I didn’t know why she would use that against me.”

Hector says that, in the end, it was indeed their faith that made the decision clear.

“At the end of the night, we couldn’t sleep. I couldn’t sleep thinking I’m not going to adopt. If I said I’m going to do it, even knowing the cost, I could sleep at night,” he says.

From that moment on, Diana and Hector had many ups and downs before they finally brought home a son and daughter from the Ukraine this year.

But though the journey was rough, they never walked it alone. The OAFC ministry was there to help the Castros begin the process. They were there when the girls they originally hoped to adopt were adopted by another family, and they were there to help navigate the paperwork, the finances and, finally, the joyful homecoming.

Hector says that as much as anything, the moral support of OAFC was vital.

“For someone who has been there to say that they understand, and this has happened to other people, I don’t know why, but it has a big impact on your life to know that you’re not alone,” he said.

For more information on the OAFC ministry and the many resources and opportunities they provide, visit www.oafcministry.com.