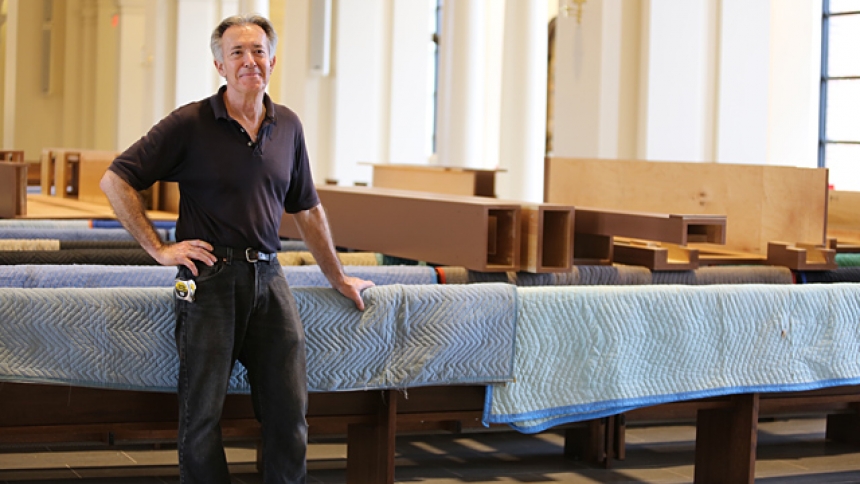 Greg Bover is a project manager on his 38th pipe organ installation. His colleague and 17-year industry veteran Dana Sigall describes himself as “like the rest of the guys here … an organ builder.”

They’ve worked on projects throughout the world in churches both new and old.

The two New Englanders of C.B. Fisk, Inc. recently sat down with NC Catholics to describe the first four weeks of the installation project of the pipe organ for Raleigh’s Holy Name of Jesus Cathedral.

The pipe organ casing is pictured, here, on March 16, about four weeks into the installation project.

NC Catholics: What has been happening on the project since we last reported?

Greg Bover: After we unloaded 15 tons of organ parts, we started the steel frame. There’s a very strong steel skeleton inside the wooden case work and that steel skeleton is bolted to the floor and rear wall of the church. It’s built to be a good reflective (acoustical) and structural surface.

We put in some of the larger wooden pipes … those had to go in as the case went up. Some of those pipes are 32 feet long. The biggest ones are about two feet square in section and weigh 700 pounds each.

GB: There are three sets of pipes that start at 32-foot pitch. That means they are speaking at 16 cycles per second, or 16 hertz. They produce a tone that’s actually a little bit below the level of human hearing … so you experience them more with your diaphragm than with your eardrums.

NCC: What about the work environment? Hours? Crew?

GB: The building was well prepared for us to arrive, and everything fit just the way it should. We were working about 70 hours a week. We’ve had a crew of eight. Six people from the Fisk shop … [and] two fellows who are riggers and specialize in lifting heavy objects. When they left, our electronics specialists came.

NCC: The design we see today, how was it formed?

GB: The way the organ looks is the result of a long design process that began with discussions with architect Jim O’Brien about his vision. We constructed a 1:16 scale model of this end of the building. It was painted exactly the way this building is painted with all the details of molding and columns … the physical model is for getting the right feel and making sure the elements of the instrument relate to the elements of the building.

NCC: Tell us about the color of the organ casing

GB: A number of different colors were discussed … we tried several and eventually wound up with [a shade called] chocolate truffle [by Benjamin Moore.]

NCC: During the first stage of installation, have you had any surprises? Runs to the hardware store?

GB: Well there’s always a certain amount of running to the hardware store. (He laughs.) For instance, we weren’t really sure how the concrete would respond to being drilled and then having the kind of wedge anchors hammered in to it that we ultimately used so we brought some different kinds, and the ones we decided on, in consultation with the structural engineer, we went out and got some more of those.

Normally we build the whole organ in our shop in Gloucester [Masssachusetts] and then take it apart, pack it and ship it. But this one is so large that we couldn’t fully assemble it in Gloucester. The first time some of those sections had been joined was here in Raleigh. That was a nail biting moment, but everything fit.

NCC: We understand that organ builders have a special tradition. Can you explain?

Dana Sigall: With every organ we build, sooner or later, we’re at the top. And it has been a tradition at our shop, and I think for most organ builders, to sign the highest part of the organ. The installation crew always signs.

We recently installed an organ in Philadelphia incorporating some of the historic case that was built, we think, back in the 1830s. There is a starburst on the top, and there were organ builders’ names on the back of that. There’s a lot of history in organ building. While we have our methods and procedures, organ building is a very old craft, and we sort of work on the shoulders of previous organ builders.

NCC: Tell us about your apron.

DS: This is a sake brewer’s apron, and a Japanese fellow that we work with had given that to me as a gift. It turns out to be really useful. It’s got a couple of pockets. You can keep everything you need on the job. It’s easy to get up and down ladders with.

DS: Opus means work. The word opera is actually the plural of opus. So opera is a series of small works that are strung together.

NCC: Does that mean this is the company’s 147th pipe organ?

NCC: Have you had a favorite moment on this project?

DS: Doing this work, especially early on in the process … a lot of it is hard, heavy work up high. We work for a long time on the instrument in the shop. To see it come together on site is pretty appealing. It’s fun to a perspective on the space that few have had.

NCC: Is there anything else special to you about organ building?

DS: At one point in my life I was self-employed and worked by myself. But organ building is not something one person can do. It’s a team effort. The quality of the instrument depends on the attention that all of us pay. When we install, we put our well-being in each other’s hands. And that’s a collaboration that I have really come to love. And I have just had four weeks of it here.