Vatican thanks seafarers, appeals for respect for their rights 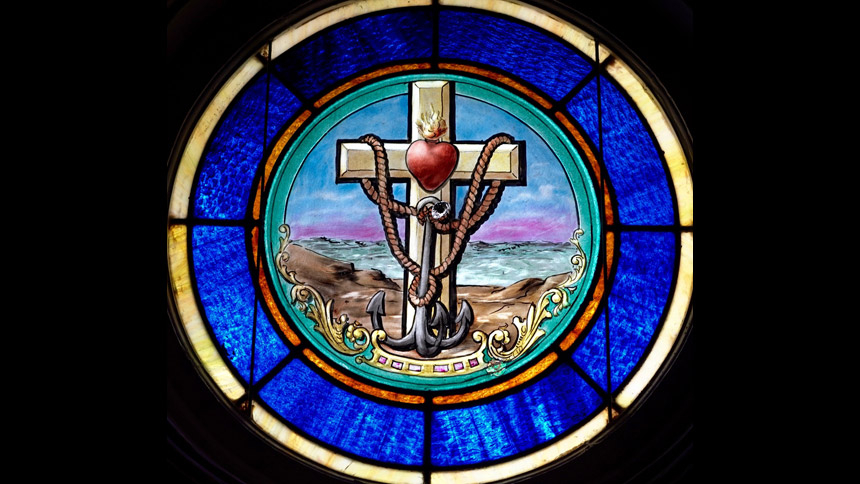 Above: A stained-glass window at Holy Cross Catholic Church in East Bernard, Texas, depicts a symbol for Catholic seafarers. In a message for Sea Sunday July 11, the Vatican is calling for much greater protection for seafarers, who are responsible for handling 90% of the goods traded around the world. (CNS photo/Janet Jones, The Catholic Lighthouse)

VATICAN CITY (CNS) — Seafarers kept products moving globally during the coronavirus pandemic, but too many of them have no access to vaccines, have been stranded on ships and often face the danger of piracy, the Vatican said.

In anticipation of Sea Sunday, July 11, the Dicastery for Promoting Integral Human Development thanked seafarers for their work throughout the pandemic and called on ship owners, governments and U.N. agencies to protect their right to health, safety and decent working conditions.

The world may have come to a standstill turning the COVID-19 pandemic, “but the ships have never stopped sailing from port to port, delivering critical medical equipment and medicines to support the fight against the spread of the virus,” said Cardinal Peter Turkson and Msgr. Bruno-Marie Duffé, respectively prefect and secretary of the dicastery.

“The maritime industry is a vital part of the world’s economy,” they said. “Some 90% of world trade is carried by ships or, more accurately, by the 1.7 million seafarers who work on the ships.”

And while they have proven to be “essential workers,” most countries do not consider them such and have left them far behind in the line to get vaccines, the Vatican officials said.

But even worse, they said, thousands, if not tens of thousands of crew members have been stuck on ships and in ports because travel restrictions made crew changes difficult and repatriation often impossible.

“We appeal to ships owners, management companies, agents and recruiters to regard crew members as more than ‘labor force,’ and remember that they are human beings,” they said. “We urge the development of working practices, which are based on human dignity rather than profit, and so provide everything necessary to improve the mental, physical and spiritual well-being of seafarers.”

Piracy and owners abandoning ships — with the crews still onboard — also put the well-being of crew members at risk, they said.

“Since January 2021, 38 piracy incidents have been reported, including 33 vessels boarded, two attempted attacks, two vessels fired upon, and one vessel hijacked,” they said. The number of reported piracy incidents may have decreased but violence against crews is increasing.”

The dicastery also noted that the International Transport Worker’s Federation has reported a doubling of the number of ships abandoned, from 40 in 2019 to 85 in 2020. It is often the result of “the deliberate decision of a shipowner to dispose of a vessel they no longer deem valuable, crew included,” they said. “Stranded in a foreign country, with wages unpaid, no prospect of immediate income and deprived of food, the abandoned crew are faced with inhumane conditions, and their families suffer immediate devastating financial consequences.”

Individual nations and international agencies must enforce the 2006 Maritime Labor Convention, which requires shipowners to have insurance to cover abandonment at sea, including to pay for expenses such as food, drinking water, medical care and repatriation costs for the crew, they said.

“The number of shipwrecks and marine accidents is declining, but one is too many, especially when seafarers are injured or die, go missing at sea or are unjustly criminalized and detained indefinitely,” Cardinal Turkson and Msgr. Duffé said.

“We lift our prayers to Mary Star of the Sea, to accompany those who are no longer with us to the safe harbor of heaven and comfort the devastated relatives and friends who are left behind,” they said.