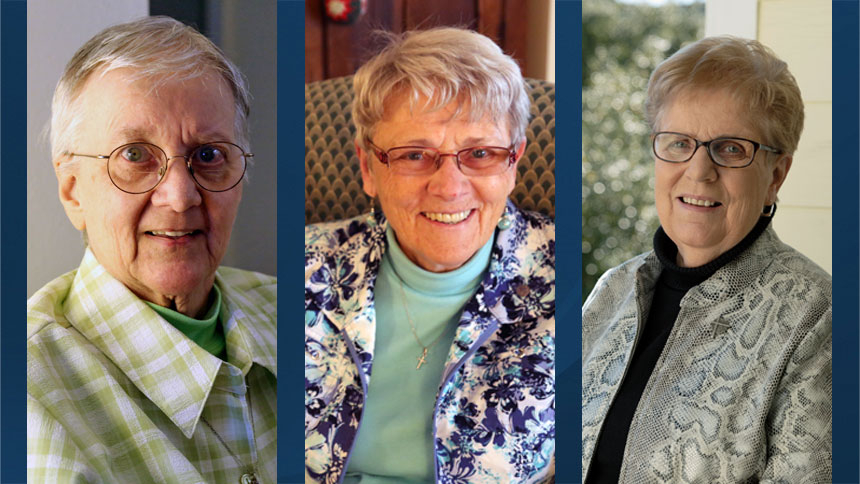 Gratitude, leadership and personal connection are the hallmarks of Sister Marge Polys’ 60 years as a religious sister with the IHM Sisters of Monroe, Michigan.

The ninth of 12 children, she was in high school when her parents received a note from her little brother’s teacher, who was an IHM sister. This teacher wanted to hold a party for him because he was “quite shy.”

She remembers feeling struck by that note and by the sister who wrote it.

“It seemed that they were concerned with the whole person; that attracted me,” she says. The note stirred something within her and, she says, “And it didn’t let me go.”

When asked what didn’t let her go, Sister Marge smiled and answered, “God.”

Though her heart and mind were in accord that she wanted to give her life to God, that didn’t mean it was easy. In 1960, when she boarded the train from her hometown in Kirkwood, Missouri, to the IHM motherhouse in Monroe, she knew that the next time she would likely see her family would be at a parent’s funeral.

“It was giving one’s life to God totally. I was ready to do that,” she says.

From that initial train ride, Sister Marge’s vocation has been, as she calls it, a “profound journey.”

She started her ministry as an educator in Michigan. After years of teaching and serving as a principal, she was asked to come to North Carolina for the first time in 1976. For three years, Sister Marge served in teen and young adult ministry at both Blessed Sacrament Parish and Elon College.

From Burlington, she was called to be a province leader for the south and west territories. Officially, she and the other leaders were stationed in Memphis, Tennessee, but since their job was to visit 140 sisters in 28 states, their real office was a van.

“We made the van into a little house and traveled around and camped in between,” she says.

For over four years, Sister Marge lived on the road. She says those years opened her eyes to the absolute beauty and diversity of the country and the different life experiences that people had.

“Seeing what our sisters were doing in ministry all around the country; it was just inspiring,” she says.

She left the nomadic life to spend another decade as a leader for her order and as a student.

Therapy and counseling allowed her to work one-on-one with people and create a deeper bond. It was a perfect way, she felt, to serve out an IHM mission, which is to continue the liberating work that Jesus Christ began.

She returned to Michigan in 2006, where she worked in a private practice and as IHM Novice director until Carolina called again in 2019. She currently resides in Chapel Hill.

Now, in what she considers to be the culmination of her experiences and journeys, Sister Marge serves primarily as a spiritual director. She describes spiritual direction as a ministry of listening, discernment and prayer in a confidential setting of encouragement and compassion.

While it may be dizzying to keep track of Sister Marge’s travels and humbling to contemplate the service she has given, Sister Marge says she only feels grateful. She says, “It was all wonderful and very enriching. I loved everything I ever did.”

Sister Carol Marozzi, SSJ has some favorite Bible readings, no doubt. One in particular is about God’s call, which makes complete sense when one considers her 60-year vocation as a sister, a journey that started when she was 18 and left her parents’ home in Philadelphia for a new beginning in her life.

Today she can discuss Bible stories with ease. First, there was Jeremiah who, she says, was a bit reluctant and initially told God he was too young to be a prophet.

“I came to realize that God called these men … not because they were the most intelligent or the most talented,” she says. “But because God saw in them potential for bringing unity and reconciliation in our world and healing and forgiveness among the people of God. God saw potential in them that they were most likely unable to see within themselves.”

Sister Carol remembers her childhood, and the teacher who saw potential in her.

When she started Catholic school in 7th grade she was behind other students in her grade. Her teacher, who was a sister of the St. Joseph of Philadelphia community, stayed with her after school every day until she caught up.

“One day I told her ‘thank you … as a result of your belief in me I have been able to nurture the gifts and talents that are mine.’”

In addition to people’s confidence in her, she felt comfortable at church. She liked the smell of incense and the sound of bells. It put her, she says, into a prayerful place.

She entered the Sisters of St. Joseph community with what she calls “naivete and joy.” It was a time when she wasn’t sure what was in store for her, but she was looking forward to the journey.

She began her vocation as a grade school teacher. From 1962 until 1973, she worked in Philadelphia, New Jersey and Maryland. She later worked for eight years at a high school as chair of the Religion Department.

When asked if she had a favorite age group to work with, she just smiles and says that she enjoys everything.

After that she worked at the St. Luke Institute, a treatment center in Baltimore, for 13 years as a spiritual director.

Five years ago she moved to Wilmington, where she facilitates and consults with orders of religious women throughout the United States.

As she reflects on her jubilee, she says that her mentors and friends have sustained her through her work. And she believes that jubilees celebrate, not years, but the fact that life is good and gets better as years pass.

“I believe age teaches us to enjoy life to the fullest. Be present. Enjoy and see life, as if, for the first time,” she says. “Aging provides the opportunity to find happiness in little things.”

Sister Mary Jean Korejwo, SND doesn’t shy away from the details of her life story.

She was born a triplet; her two infant brothers died in the hospital. When she tells the story, she includes the fact that 16 years later, on her birthday, a set of triplets was born at the same hospital. She smiles when she shows the newspaper article about their birth.

When she graduated from high school, she was offered a scholarship to Bowling Green State University. She was fourth in her class of 800 at a public high school in Elyria, Ohio. She was excited about going to college and went to visit the campus with her mother. Her mother, it seemed, didn’t feel it was the right place for her.

When Sister Mary Jean tells the story and someone says they’re sorry, she is quick to hold up her hand, smile and say gently, “No, this works out good.”

She ended up going to Notre Dame College of Ohio.

“We were the first dorm students at the college,” she says. “They took very good care of us.”

What she remembers most was how the sisters who ran the [then] all-women college lived a philosophy that God is good. For her, it stood out because she grew up in an atmosphere where the core belief was that God is judge.

“Their concept of God was a total change from what I had been raised in,” she says.

She began to feel a peace and focus on the positive things she was able to do, such as learning to play the piano and organ.

In 1957, at age 20, she entered the convent on campus. She considered majoring in business with a music minor, but one of the sisters recommended that she switch to biology and math because teachers were needed. She obliged.

She graduated from college and made final vows in 1960. She obtained a master’s degree in classroom teaching from John Carroll University.

She spent a bulk of her vocation teaching in Catholic schools in Ohio.

In 1994, her congregation asked her to travel to North Carolina to work at Cardinal Gibbons High School and replace a sister who was leaving that school. She taught science for two years. In 1996 she moved to the development department and helped start the building campaign for a new school building.

In 2006 she moved to the school’s business office, where she still works today. Her schedule has changed to two days a week. She enjoys the Gibbons community. “Whatever you can do for them, they’re grateful,” she says.

As she reflects on her vocation, she recalls a Bible verse about the power of non-material gifts.

“I take a vow of poverty,” she says. “But what I have – whatever that is – I give. What’s significant is that I get to interact with people.”