Their method of moving: How one furniture ministry is serving families 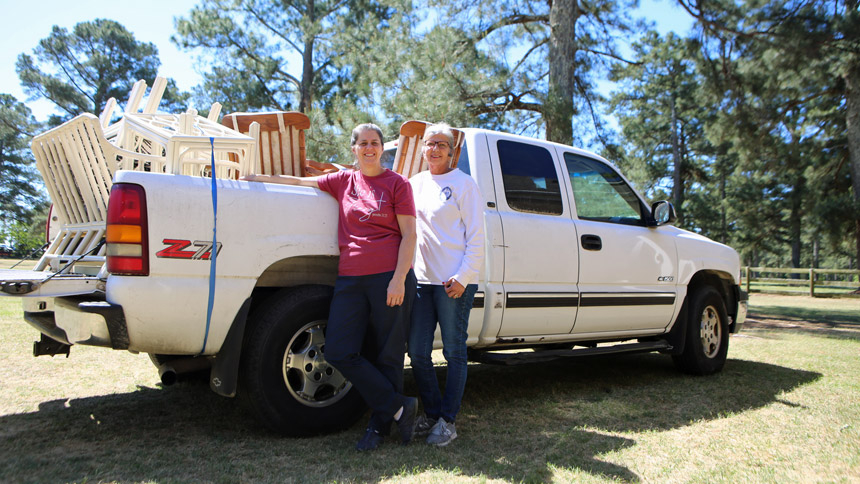 First there’s Anita. Originally from Ohio, she’s an Army spouse. Her husband is retired now, but she spent much of her adult life moving every few years. Anita is fueled by diet soda and the Bluetooth headset nestled in her left ear.

Then there’s Brenda. She’s a chiropractor by profession. Her husband is, too. She’s lived in the Pinehurst area since she was a child. Her style includes a red T-shirt her husband gave her as a gift. It reads: “She is strong” and references the Book of Proverbs.

Together the two women can finagle a pair of oversized chairs and a queen-sized bed into the back of a pickup truck in minutes. They know bungee cords and straps. And they’re likely the only ones who can keep up with each other and play their real-life game of Tetris. For them, it’s still a puzzle, but with stuff.

Brenda Stroker and Anita Monk are the core of We Care, a furniture and household item ministry at St. Anthony of Padua Parish in Southern Pines.

The premise of We Care is simple. They collect gently used furniture and household items and pass the pieces along to those who need them. It’s about beds, tables, plates, chairs and sheets, yes. But the overreaching message is about partnering with people who are trying to create a home. From a Catholic perspective, which is important to both of these women, it’s about the Corporal Works of Mercy.

It started with a small exchange. Stroker was volunteering at a parish food program. Back then, there was no physical food pantry, but she’d go to the food bank, fill boxes and deliver them to families in need. She met a family that told her they needed a mattress. Within days someone else told her they had a mattress set they needed to get rid of because of changes in their household.

It was that mattress match that started We Care. The early days were about a few pickups and drop offs each month. Then We Care gained storage spaces, each one bigger than the one before. Monk’s truck has a slight green stripe from the time she accidentally hit a post at one of the storage units.

Today, We Care’s home base is a barn. It’s situated next to St. John Paul II School. On a Saturday afternoon, Stroker and Monk work in the barn, mostly loading and unloading, as the songbirds chirp and people cheer nearby at children’s soccer games.

We Care utilizes seven former horse stalls in that barn and each stall is a room, of sorts. There’s what they call the bedroom with mattresses and headboards. Then, there’s a lamp room, a room for linens such as sheets and towels and the kitchen room, which is brimming with small appliances, cookware and dishes.

“If you put it in the bulletin at St. Anthony’s and you say that you need pots and pans. You will have pots and pans,” Monk said. “Hundreds of them.”

“And new ones,” Stroker added.

The same is true with bath towels and sheets, they said.

We Care is thankful for the items they receive, and for the people in their community who make the ministry work. Parishioners Ken Gagnon and Tom Murphy help each week with pickups and drop offs.

Other partners, such as Mattress Firm, which provides metal bed frames at a discounted cost, are crucial to the ministry, Monk said, as are people like the parishioner from St. Mary Church in Laurinburg who owns a Jersey Mikes, which was planning to donate 15 tables and sets of chairs following a remodel.

We Care finds its clients by word of mouth and relationships with Family Promise, a homeless shelter for women and children, and Friend to Friend, a domestic violence shelter.

Each month, We Care works with about 15 families to furnish homes for those starting out or starting over.

“Even in this community, there’s a lot of wealth but there’s a lot of poverty too,” Stroker said of Moore County, which is often known for its horse farms and golf courses. “A lot of people live from paycheck to paycheck and all it takes is one illness, losing your job … or if your car breaks down and you can’t afford to fix it, how do you get to work? People don’t choose to be poor.”

Stroker and Monk don’t like to talk much about what they do. A local priest, Monsignor John Williams, had to talk them into sharing their story with NC Catholics. While they won’t say much about themselves, they will say how good it feels some nights falling asleep knowing that their work means that someone in their town isn’t sleeping on the floor anymore.

“With We Care … there’s a community effort to respond, but the team’s leadership makes it come together,” said Monsignor Williams. “Many empty houses and sparse apartments get set up so nicely. Anita and Brenda are very skilled, and, in their kindness, they are the salt of the Earth.”

He added that their ability to carefully pay attention to people’s spaces and how they live their lives is what sets Stroker and Monk apart.

“They don’t make a big fuss of it. It’s almost like ‘Thank you for taking this furniture off of our hands.’ It’s done in such a respectful way … that that’s how people feel,” he said. “It’s all in a day’s work. They’re in; they’re out. It’s done.”

While Stroker and Monk don’t like having their photographs made, they will laugh about how straightforward and direct Monk is compared to Stroker’s communication style.

“If we get to a house and they have two couches … I am like ‘We aren’t dropping this off. You already have two couches. Sorry,’” Monk said flatly. Meanwhile, Stroker said she may be more likely to avoid tough conversations or accept something like a donated lampshade that has numerous holes in it and then, later, put it in the garbage herself.

“She can’t say anything bad,” Monk laughed about Stroker. “But we balance each other out. We really do.”

Both women are moved when former clients become donors themselves, or when clients receive items and try to return what they don’t need.

“We had a lady one time who got a set of silverware and she tried to return some of the spoons, knives and forks because she didn’t need all of them,” Stroker said.

Together the ladies of We Care have learned they can take a bunk bed apart, move it and put it back together again. They’ve also learned to avoid transporting appliances without a little help.

“One day we picked up a dryer,” Stroker said. “We both tweaked a side. My right side. Anita’s left. We went straight to my husband’s [chiropractic] office.”

Even their temporary injuries are part of their natural balance and rhythm that keeps We Care in motion.

“Our joke is that our name is one-trip Sally,” Stroker said. “People will go, ‘You’re never gonna get all that on the truck.’ But we do. We know exactly how much that truck can hold. We’ve come a long way. 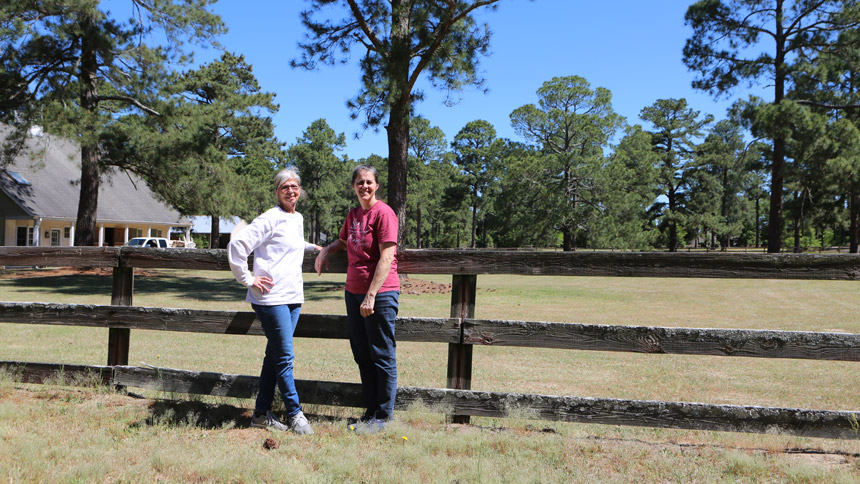 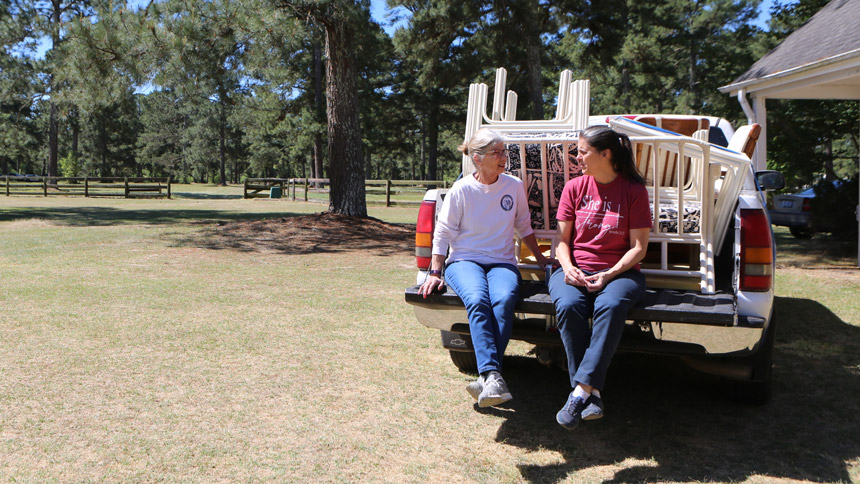