Ten days: How Catholic Charities reopened its doors during a pandemic 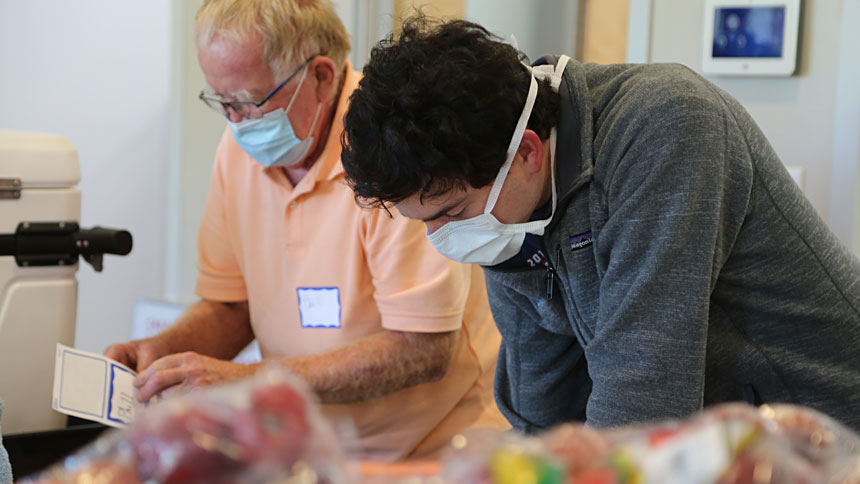 Catholic Charities is used to disasters. It’s part of what they do. After hurricanes, their offices provide food, water, cleaning supplies and even mobile units with washing machines and dryers.

When a storm is coming, they prepare. Once it hits, they wait till the roads are clear, or it’s otherwise safe to serve. They’ve had to wait overnight, or maybe a day or two. They’ve adjusted to power outages and gasoline shortages.

But not all disasters are alike. Some are unrelated to weather. Sometimes the disaster is the unexpected beginning of a pandemic.

That’s how it went in March for Catholic Charities, which operates five food pantries in eastern North Carolina and distributes nearly three million pounds of food a year.

Suddenly an organization that was used to waiting for a storm to pass was staring down an event that had no plans of passing in a day or two. No one was waiting on electricity to return or flood waters to recede.

Instead, Catholic Charities employees deliberated over what to do about those food pantries, and how to keep clients, volunteers and staff safe.

As school buildings closed, many school children who relied on meals at school were missing those meals. As unemployment rose in North Carolina, the need for food pantries grew.

“People’s needs had changed … that’s a big thing,” Lisa Perkins, executive director of Catholic Charities of the Diocese of Raleigh, said of that time in March.

Perkins and Daniel Altenau, director of communications and disaster services for Catholic Charities in the Diocese of Raleigh, talked to their administrative staff and regional program directors. They communicated with partner agencies and other Catholic Charities groups in the United States.

“Everything around us was closing,” Perkins said. “I think one thing that was different about this event was that on top of managing safety, you had to also manage fear.”

Catholic Charities made the decision to suspend services, which meant the five food pantries would close, albeit temporarily.

It didn’t take long for the phone calls, emails and social media feedback to arrive. Some of it was supportive. But a fair amount was negative, and those comments were centered around Catholic Charities closing when people needed them most, Perkins said.

“It hurt,” she said, pausing for a moment while sitting at picnic table outside her office building in September. “But we let the public know that this was just a temporary pause and worked around the clock to begin serving families as quickly as possible, while making sure we were keeping everyone involved safe.”

A new type of need

One main concern for Perkins and her staff was that Catholic Charities wasn’t steeped in medical situations and how to operate in a pandemic. But Kevin Sullivan, a parishioner of the Newman Catholic Student Center in Chapel Hill, was. And he reached out.

Sullivan, who was studying to become a deacon at the time, had the right type of experience.

As a college student in the early 2000s, he worked as a paramedic, and he got into the area of pandemic planning by way of training and response to biological and chemical weapons when he worked for the Fairfax County Fire and Rescue Department and Grady EMS during the anthrax attacks. He went on to work for the Department of Homeland Security and, later, in corporate pandemic planning and response in the private sector.

“Professional pandemic planner is really my background,” he told NC Catholics during a video conference interview. “In my current role, I work for a clinical research organization … when I saw the news about Catholic Charities shutting down its food pantries, I reached out.”

Perkins was thankful for his offer.

“He said, ‘I really think I can help you,’” she said. “I didn’t know him, but I was like, ‘If you really think so, tell me how.’ And he did. And he brought together this group … if we had questions, they researched it. If our staff had questions, they figured it out. What type of mask is ok? How many people can be in space at one time? They looked at everything from logistics to actually directing traffic. This group jumped in.”

The group that ‘jumped in’

For two weeks, Sullivan, Altenau and Perkins spent hours discussing how to safely reopen pantries. They talked about how the food could be distributed outside with social distancing, how intake would operate and how to keep everyone safe.

At the top of everyone’s minds was that almost all of the regular, reliable volunteers at the food pantries were retired from full-time work, and their age put them in the at-risk category for COVID-19. In addition to keeping volunteers who decided to return safe, it was also a priority to recruit and train new volunteers to take the place of those who decided not to.

Personally, Altenau lost his grandfather in New York to COVID-19 early in the pandemic. That loss stayed on the minds of both he and Perkins as they faced major decisions here in North Carolina.

“We were experiencing it,” Perkins said. “Internally, we had staff worried about it.”

They carried the worry, but they worked, too.

For two weeks, video conferences and late evenings became the norm. Altenau and Sullivan worked alongside a team (see The 'true drivers,' below) he put together using his resources in the academic, faith and professional communities he belonged to.

“I think we just slept less,” laughed Sullivan when asked how the task force continued to work full time and volunteer for Catholic Charities.

The team, which included professionals in fields such as public health, education, marketing and technology, produced a protocol for reopening, as well as a series of videos and PowerPoint presentations for staff and volunteers that detailed how that protocol would operate.

It wasn’t a one-size-fits-all solution. In many cases, new ways of operating were customized for each pantry depending on its size and intake process.

By the time food pantries reopened in April, they reopened in a way that made both the team at Catholic Charities and the volunteer task force comfortable and assured. And, according to Altenau, there have been no reported cases of COVID-19 among volunteers or staff since reopening.

“This was not something I tried to do myself. We had some great folks … they’re the real heroes. The project managers … and behind them a team of 15 people,” said Sullivan, who was ordained a deacon in June. “Everyone is called to bring all their gifts and talents to the table. I love to imagine what the Church would look like if we all did that. It’s wonderful and inspiring to see and work with people who are doing that and to know that, yeah … they were only closed for ten days. The Holy Spirit was there.”

Just months before he was ordained a deacon for the Diocese of Raleigh, professional pandemic planner Kevin Sullivan assembled a volunteer team of professionals from public health, education, marketing and technology to create content for Catholic Charities to help them reopen five food pantries in a pandemic.

NC Catholics reached out to learn more about team leaders, whom Sullivan called the “true drivers” of the project for putting their professional skills to work and putting in many late nights. 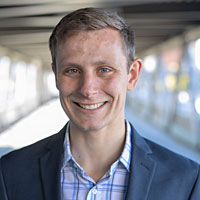 “I was part of a small working group that focused on cleaning and safety. We developed documents … [and] a brief job description for our 'safety monitor' position and sought partners to help the ministry clean materials. For example, a local laundromat offered free cleaning services. I want to give a big shout-out to Emma Balek, Amanda O'Brien, and Alice di Fazio, who were part of my small working group. I think the most rewarding part was to see so many other local Catholics so passionate about the work being done and so generous with their time to advance that work.”

“I was project manager for the 'COVID Education for Volunteers' module … we had a good-sized group of people with expertise in medicine, operations/logistics, program management and communications. We also had food pantry volunteers. This is the first pandemic many of us have ever lived through, and seeing the fallout was concerning. I’d known about the threat of pandemics and the public health impacts they could bring, but it did not prepare me for the gravity of the situation.

This Catholic Charities project was different … it was a way to do something in addition to my job description, to help in a different capacity and use my skills for a new purpose. The most rewarding aspect of it was knowing that we helped to reopen a very supportive and meaningful resource that the community could come to in these times. I also learned a lot about Catholic Charities and felt invigorated that we were doing something positive.”

Metta: I’ve always loved graphic design … I helped with the education and training team. I designed hardcopy job aids, signs, maps and helped edit the soft designs. It was a lot of late nights, and espresso helped!  We had been praying about how many people were in need .. and God brought us this opportunity.

Dan: I worked with the client intake and grocery delivery process and led the site adaptations team. We definitely made this our focus for the two weeks of the project, but I couldn’t think of a more fun and rewarding way to spend our evenings. It definitely beats Netflix! 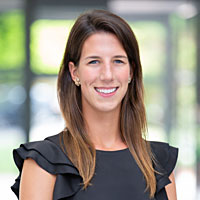 "When COVID hit, I reflected, 'How can I continue to help others in this environment?' When Kevin presented the opportunity to assist with the reopening of the food pantries, it truly was an answered prayer! I volunteered to be a team lead for the intake process. We worked together to provide a recommendation to ensure clients could collect their food safely, while enforcing social distancing measures. It was extremely fulfilling to assist Catholic Charities as they quickly adapted to COVID, with the main goal of a sustainable, safe reopening for clients and volunteers. 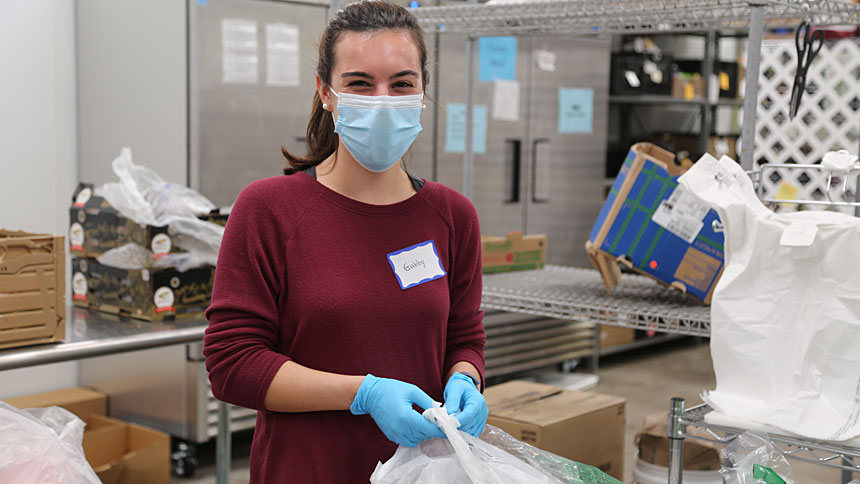 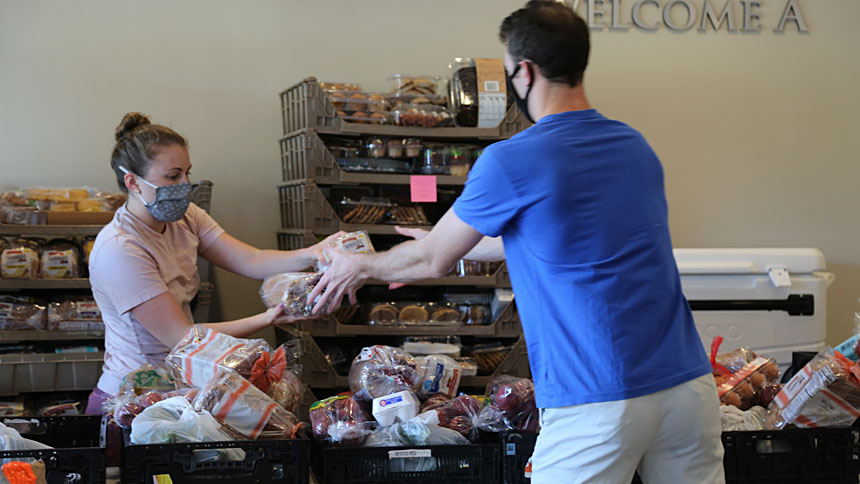 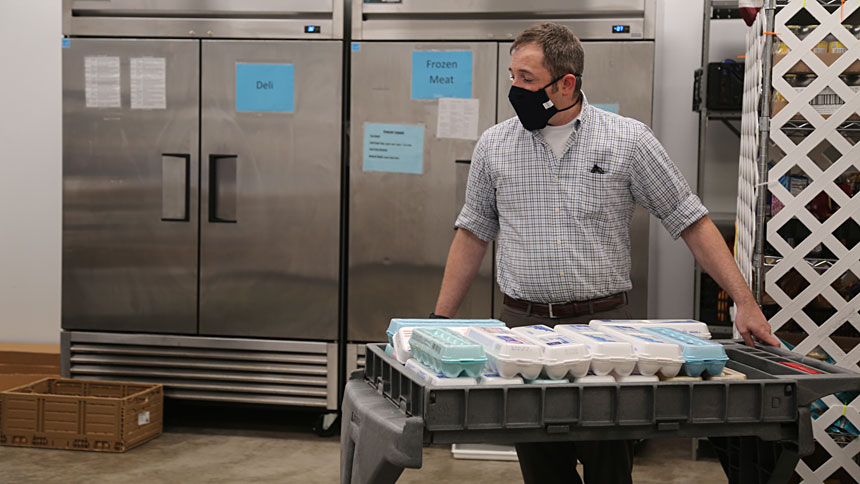