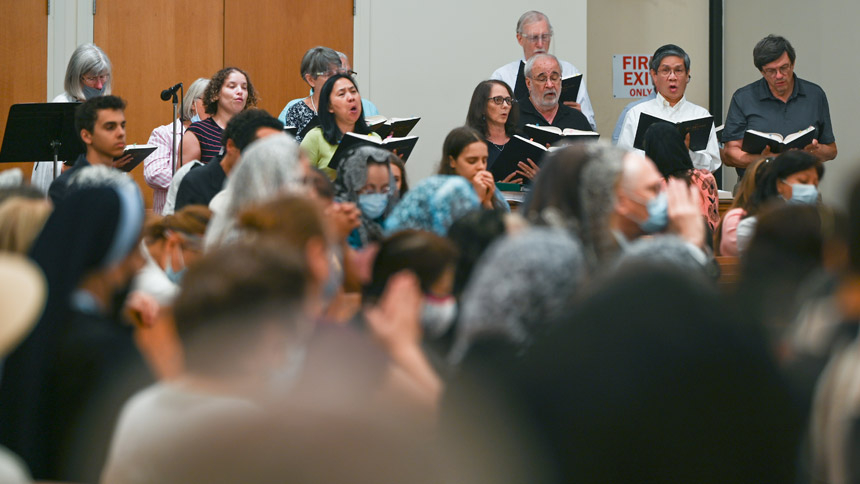 RALEIGH - They end every practice the same way – “St. Cecilia pray for us.” Members of the choir at Our Lady of Lourdes Church have an affinity for the patron saint of music, whose feast day is Nov. 22, and for whom their choir is named.

The name gives the group a sense of identity, said Brenda Accurso, director of liturgy and music for the parish.

“Building a successful choir of course has musical aspects, but it's at least as important, if not more important, to have a clear … purpose. One way to communicate this to the singers, congregation and potential new members, is to name a choir,” she said. “St. Cecilia … is a martyr, which means she gave up everything for Christ. Of course, singing isn't martyrdom, but it does represent sacrifice.”

Members practice one night a week as a group and on their own at home. They also have the courage to share their voices in front of others.

“It requires sacrifice,” said Accurso. “St. Cecilia used music to draw closer to Christ … we strive to use music in the same way, not to entertain, or show off, but to draw us closer to Christ by revealing his beauty and to lift hearts (ours and others) in prayer.”

The choir has 13 members and sings for all the major liturgies and two Sunday Masses each week, in rotation with Lyric, the parish youth choir.

What to know about St. Cecilia

St. Cecilia has inspired Christians and artists for centuries. Believed to have been martyred around 230, this patroness of music and musicians continues to be honored for her unfailing devotion to God, and for her courage and generosity.

According to stories from the fifth century, Cecilia was a Roman citizen from a wealthy family who secretly consecrated herself to God as a child. When her father insisted she marry a pagan, she fasted and prayed to preserve her virginity.

During the wedding, Cecilia sang a prayer in her heart asking God for his intervention. That night, she told her husband that an angel had been sent to protect her from consummating the marriage. When he asked to see the angel, Cecilia sent him to be baptized by Pope Urban, and he was converted. Returning to his new bride, he found an angel with Cecilia who crowned the two of them with roses and lilies.

Tradition says that after her husband was martyred for refusing to sacrifice to pagan gods, Cecilia donated her material goods to the poor and converted more than 400 people with her preaching before she was sentenced to death.

Before her death, she donated her home to Pope Urban, asking that it be converted into a church. The church, Santa Cecilia in Trastevere, was erected on this site in the third century. In 1599, when the church was renovated, Cecilia’s remains were examined and found to be incorrupt. Her body was reburied under the altar.

Due to her prayerful song during her wedding, Cecilia is honored as the patroness of church musicians, and is usually depicted with musical instruments. Her story has inspired works by artists through the years, including painters and composers, and Geoffrey Chaucer retells her story in “The Second Nun’s Tale” in The Canterbury Tales.