'Something sublime' When it comes to liturgy, what’s music got to do with it? 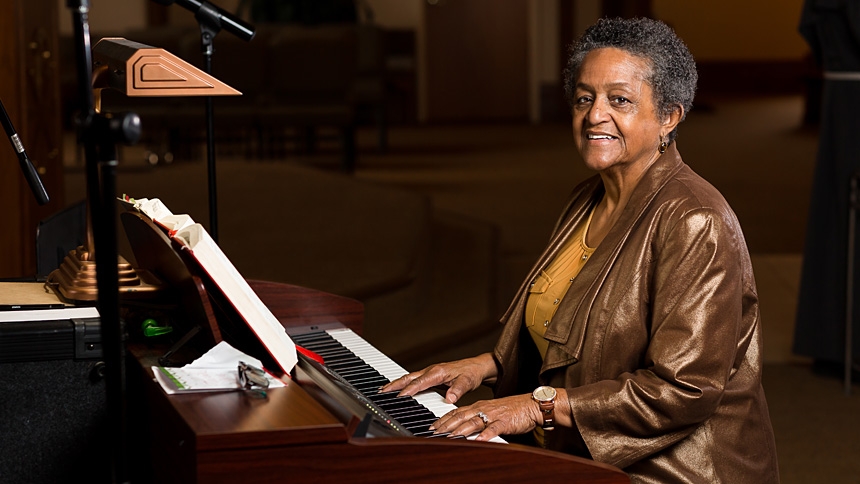 It’s Sunday morning. Yellow light seeps through the clouds above Durham’s Holy Cross Church. Inside, parishioners settle into pews, wait and take in the quiet before Mass.

In the next moment, however, all that changes. Choir members are clapping, swaying, and singing. The music – rhythmic and joyful – draws worshippers in.

Here, members of the Liturgical Choir break the silence. Their voices – angelic and inspiring – touch the souls and open the hearts of congregants to the solemnity of the Mass.

It’s a welcome sound for Raleigh resident Nicholas D'Andrea, who graduated from N.C. State last year and now works as a patent agent at a Durham law firm in Durham. The music, he says, is a key reason he returns to Mass each week.

“Many of their songs help me to step out of the busy work world and realize God's presence in my life,” says D’Andrea, who particularly enjoys the recessional, or music at the end of Mass. “When I am walking out of church … it feels like the quality of the harmonies follow me out to my car and stay with me for the rest of the week.”

Most every one of the 97 parishes and missions throughout the diocese has a music ministry that supports and enhances the liturgy and offers praise to God. And choosing the style, instruments, and choice of songs each week is the music ministry’s work.

Music also reflects the personality of the parish and, in turn, the parishioners who are formed by it. Mindful of that, music ministries across the diocese are diverse. They range from small to large, comprise adult and children choirs as well as those whose members sing in English and Spanish, and have diverse musical styles, from gospel and traditional to contemporary and folk.

In the end, however, the music that fills the sacred spaces of these parishes is a “universal artform,” says Michael Accurso, the diocesan director of liturgical music. “It’s one everyone can relate to no matter their culture. Music is more than just something we hear and does more than entertain us; it also stirs our emotions. So why not use music to help us pray?”

To be sure, music has always been a high priority in the church.

In the 1960s, the Sacrosanctum concilium or the Constitution on the Sacred Liturgy, one of the constitutions of the Second Vatican Council, called for greater lay participation in the liturgy.

Some interpreted that to mean people singing, underscoring the importance of music to the worship experience. The roots of music ministry in the Diocese of Raleigh, however, are not as deep, given its start not only as a mission territory, but also its geography in a predominately Protestant area, Accurso notes, adding that churches here also did not have the musical support those in the North and Midwest enjoyed.

By the late 70s and early 80s, Catholics from the north relocated to Raleigh for jobs at transplanted companies like IBM, spurring Catholic population growth throughout the diocese.

With that growth, Accurso adds, the diocese’s young music ministry, which then comprised primarily volunteers, also expanded. The hiring of music ministers, such as Gene Pipas at St. Raphael parish and Lynn Brugnolotti at St. Andrew the Apostle Church in Apex, came next in the early 80s.

In those early years, Brugnolotti recalls, congregations grew, churches were built and the demand for musical prayer increased. Professional musicians were hired; and musical prayer benefited.

“As the documents state, ‘good music fosters faith,’ and so it happened,” explains Brugnolotti, who later became the music minister at St. Egbert Catholic Church in Morehead City, where she has served for the last 15 years.

And it continues “to happen” as parishes use music to glorify God and to interlace music and prayer into the liturgy. Some of that music, however, has not been updated since the 80s, notes Accurso, who is working with music ministries across the diocese on repertoire development.

The hope, he says, is “to introduce more traditional styles and contemporary music,” into the liturgy. Today, Brugnolotti adds, “music in worship is even more important in a world where it can be difficult to make sense of our place and our purpose.”

Songs rooted in Hispanic and Latino culture are important, too. As Pope Francis says in a recent Catholic News Agency article, “Even if we speak different languages, everyone can understand the music we sing, the faith we profess and the hope that we await.”

St. Mark Catholic Church in Wilmington uses traditional Catholic music – characterized by Gregorian chants and accompanied by the majestic sounds of an organ – at both its English and Spanish-language Masses.

Doing so helps parishioners to learn new ways of worshiping and embrace the theology of the Mass, in what Alex Hill, the parish’s director of music and liturgy, describes as a contemplative liturgical environment.

“The choirs, organists, and solo vocalists serve to add beauty, dignity, and reverence to the Mass,” Hill says. “It is important to provide liturgical music, which directs people's minds and hearts away from the everyday and familiar, to something sublime, beautiful, and set apart."

As an example, he points to the chant "Anima Christi," set to a simple Gregorian melody.

“We sing it in both English and Spanish, and it has a powerful effect on the praying community after Communion,” he notes.

The music ministry at St. Francis de Sales in Lumberton is among the smallest in the diocese. But that does not matter.

“Music joins us together, no matter the age or the language barrier, as a church family,” Meghan Miller, children’s choir director, says.

Even if there is no official cantor or musician for the Mass, she says, “the congregation will begin to sing and lead the music, which sets the tone for the services … and helps relate the word of God with song.”

At Holy Cross in Durham, its distinct character as an African American parish continues to shape its worship and ministries.

It’s known for its upbeat, intimate and emotionally-rich gospel music, though its two choirs also lead the congregation in songs, ranging from spirituals to contemporary and traditional Catholic music.

“I tell the choir that they need to make the words they sing transfer to and touch people,” Gloria Burton, liturgy and music ministry director, says. “We are worshipping and praising God through our music, which helps reveal him to us in amazing ways.”

As hymns are sung at Holy Cross, it’s not unusual for parishioners to exclaim “Amen” or “Hallelujah.”

At Holy Name of Jesus Cathedral, the Liturgical Choir from N.C. State leads the music at the Sunday evening Mass. Formed five years ago, the choir employs a wide variety of music, including chants, hymns, choral pieces and contemporary liturgical composition, says Jeff Rice, its founder and director.

For Rice, the goal is “evangelization through beauty and that it facilitates the assembly’s participation in the celebration of the Eucharist – maybe by amplifying the themes of the season and liturgy, or touching someone in a way that is not possible with words.”

“Music touches the soul and allows for prayer in a way that is not found anywhere else,” she says. “As my friend Elaine Rendler says, ‘They don’t go home humming the homily!’”

Brugnolotti says, however, that when collaboration between priests and music ministers flourishes, parishioners “do go home humming the homily because we are all praying over the readings, contemplating the nuances of the liturgical season, and examining these things through the lens of our experiences and the world we live in.”

Those nuances are taking on a whole new meaning at Holy Name of Jesus Cathedral, where a new 3,737-pipe organ with three keyboards was blessed January 3.

“The organ is an entire symphony in one instrument,” Accurso says, noting that it will offer comfort to those who gather at the cathedral for a funeral, and add grandeur to weddings as well as to celebrations of great solemnity, like Christ the King. Yet, its primary purpose, he stresses, is to accompany the congregation in singing.

Asked to contemplate worship without music, Accurso is quiet for a long time and finally says, “I wouldn’t like it.” When he elaborates, his words tumble out in staccato fashion: “Music enhances life … we sing at birthdays… we listen to music to get in the Christmas spirit… we use music to understand things in a different way... and like Pope Francis says, music helps us to see a glimpse of the beauty of heaven.”