Soaring: Teen embraces a 'golden' opportunity for her community 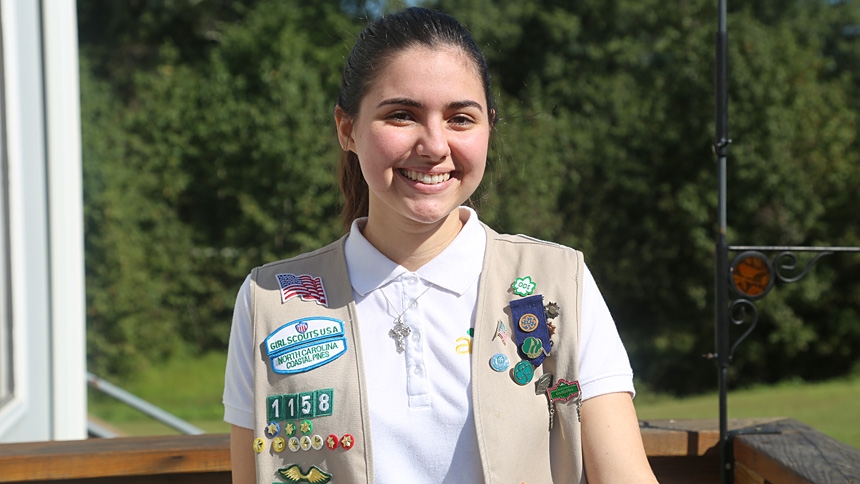 Montana Wisnewski flew an airplane before she could legally drive a car. And it was no surprise when an air patrol came calling on the teen, who is known for her leadership skills.

Montana was recruited to be part of the Civil Air Patrol, an Air Force auxiliary program that teaches youth cadets about aerospace sciences and trains them in aeronautics and flight.

When a pilot hands over the controls of a Cessna 182 to a 17-year-old, you can be certain that teen has shown responsibility, confidence and competency. For Montana, those skills were learned in Girl Scouts.

Montana is working to earn her Gold Award, the highest achievement within the Girl Scouts of the United States of America. In order to achieve that distinction, a girl must identify an issue in her community, and take action to change her corner of the world for the better.

For Montana, whose “corner” is her hometown of Hurdle Mills, a project idea hit eight months ago. She had celebrated Mass at her parish, Holy Family in Hillsborough, one Saturday evening because she was scheduled to fly on Sunday. As she prepared to fly, her parents attended a parish pancake breakfast.

When they arrived home, later than expected, her mom was shaking.

“My sister ran in and said, ‘Mom saved a life!’” Montana says.

At the Knights of Columbus pancake breakfast, a woman had a seizure and hit her head. Her heart stopped. Montana’s mother, a nurse and former scout, stepped in and started chest compressions with help from one of the Knights.

The woman made it to the hospital and recovered. But, Montana says, there was a lot of confusion during the emergency. Who should call 911? What address do we give? Is the first aid kit stocked? In addition to these questions, they realized there wasn’t an automated external defibrillator on site.

When she heard about the lack of an AED machine - which may mean the difference between life and death in situations of heart distress – Montana knew it was something to work on.

“I thought, this is it. This is somewhere that I can help. Right here, right now,” she says.

After gaining approval from her pastor and parish council, Montana submitted her idea to Girl Scouts – North Carolina Coastal Pines. It was approved in June.

The project requires at least 80 documented hours of work and prohibits the Girl Scout from personally raising funds. As she researched AEDs and contacted the local Fire Marshall to ensure her emergency action plan was comprehensive, word about her project circulated around the parish.

The local Knights of Columbus Council #9549 stepped in and asked if they could support her by raising funds to buy the AED. Gratefully, she accepted.

“I love my parish. I’ve been here literally my entire life and I want to leave a mark, to give back to my parish because all these people have done so much for me,” she says.

In order to achieve the Gold Award status, Montana’s project must be complete by September of 2019. Her goal, however, is to have it done by May in conjunction with her graduation from high school. She believes that with the unwavering support she has received from her parish, her goal is within reach.

Today her focus is currently fully on her Girl Scout Gold Award and finishing high school. But, for Montana’s future, the sky seems to be the limit.

“There’s so much I want to do in my life, I can’t pinpoint one thing. I want to go to college first, at least get my associate degree, and from there, wherever the wind takes me,” she says. “I have trust in God that he will put me on the right path.”