Sister Ivantic, 107, is living in her second pandemic 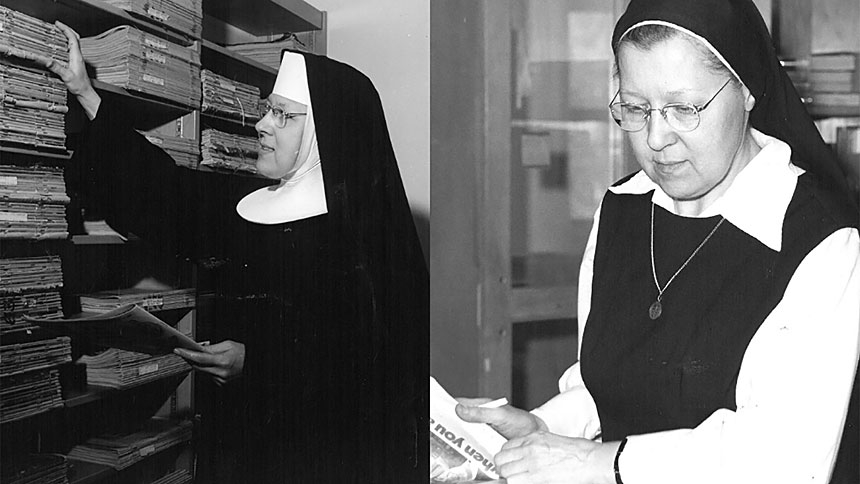 CHICAGO (CNS) — For Benedictine Sister Vivian Ivantic, these times are not unprecedented.

Sister Ivantic was born in 1913, five years before the Spanish flu pandemic that began in 1918. Now, the Chicago woman religious can add the novel coronavirus to the deadly illnesses she has escaped.

The 1918 pandemic infected an estimated 500 million people and killed at least 50 million, including about 675,000 in the United States, according to the Centers for Disease Control and Prevention. About 30 million people have been infected with COVID-19, the illness caused by the coronavirus, and more than 848,000 have died, including 183,000 people in the United States as of Sept. 1.

Sister Ivantic had COVID-19 symptoms in April and recovered. Her symptoms were so mild, she thought she just had a cold.

“I think I’m too old to be set back very much,” she said. “I’ve been very, very fortunate.”

At 107, Sister Ivantic is the oldest living Benedictine in the world, her community says.

Many centenarians attribute their longevity to a shot of whiskey every day or some other habit, but not Sister Ivantic.

“We don’t serve whiskey,” she said of the St. Scholastica Monastery, where she lives. “People have wine once in a while, but the whiskey’s pretty short.”

She grew up in north Chicago and joined the Chicago Benedictines when she was 19.

“I always wanted to,” she said. “In first grade, I said to my mother, ‘That’s what I want to be.’ I just never thought of another kind of life.”

Her first-grade teacher, Sister Adelaide, would later become her superior.

Most of her career was spent as a teacher, librarian and archivist.

“I’ve done lots of different things,” she said, noting that she taught third graders and high school Latin as well as being a librarian.

She needs assistance to walk now and uses a wheelchair when she goes outside to feed the squirrels. She also appreciates retirement.

“I take naps now, which I couldn’t do earlier,” Sister Ivantic said. “People take good care of me.”

With almost 11 decades under her belt, has she seen many changes in religious life?

“Definitely. Right now, I’m wearing pants,” she said. “That was most unusual for religious women when I entered. We had these long, black robes, and you had to be careful when it was muddy.”

She was from a family of nine children, but in World War II, two of her four brothers were killed within a week of each other. Now, her brother Bill is her only living sibling.

In 1920, when Sister Ivantic was 7, her mother got to vote for the first time.

“I know how carefully my father worked with my mother to go voting,” she said. “I was small, but I knew something was going on. He was encouraging her to go.”

She says her favorite work was teaching.

“It was wonderful to be able to open the eyes and ears and the souls of the little ones you taught,” Sister Ivantic said, “not just about God, but about history and geography. … It was always a wonderful place to be.”

Because of COVID-19 restrictions, her 107th birthday celebration on Aug. 28 was spread out over the week, with a few relatives visiting each day.