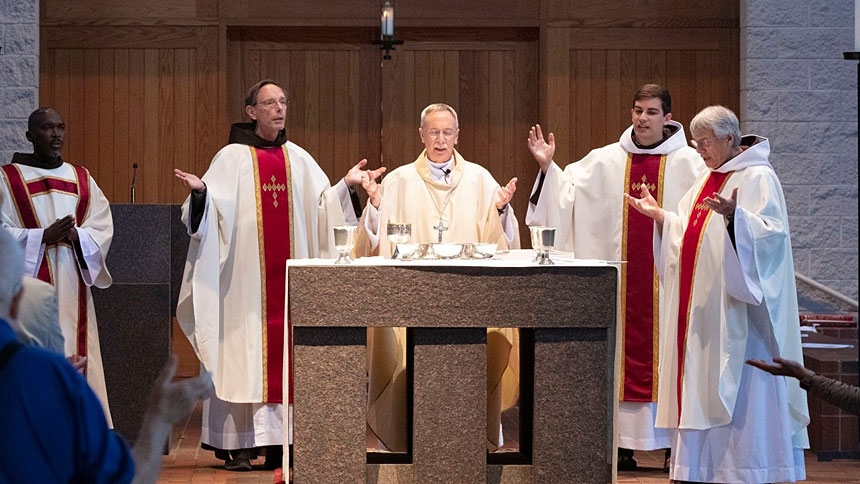 In an ordination Mass as unique as the priest who was ordained, Father Casey Cole was ordained to the Franciscan Order June 22 at Immaculate Conception Catholic Church in Durham.

First, every lay person who participated in the Mass was female. A purposeful decision, said Angela Flynn, director of Liturgy and Music for Immaculate Conception and a friend of Father Cole.

“Casey felt that because of the nature of the ordination, the sanctuary would be full of friars, brothers, men. He wanted the people of God in their realness to be there so he chose to use only women as lay liturgical ministers so there would be equal balance,” said Flynn. “That’s who he is, he thinks about things like that.”

Next, the responsorial psalm, Gloria and meditation song were all brand new arrangements for the music ministry. Each was found by Father Cole and chosen as much for its beauty as for the meaning in the words.

And, perhaps speaking most directly to the uniqueness of Father Cole, there was an inordinate number of photos and videos taken throughout the day.

In fact, an announcement on the last page of the Mass guide read:

“Many of you will have taken pictures or video during the ordination. Casey would like to include those in an ordination day retrospective planned for Breaking in the Habit and asks that you would generously share those with him.”

The idea of iPhones and cameras being out during such a solemn event may seem uncomfortable to some, just as the idea of a social media ministry may seem out of place.

However, it is part of the greater calling that has become essential to Father Cole’s vocation.

“I was inspired by how many people my age were interested in religion … I found it to be a fun, welcoming place doing great work for others,” he said.

In 2011 Father Cole graduated from Furman University, where he studied religious studies and poverty studies. The year he graduated he started writing a blog about feeling a call to the vocation of priesthood.

That blog, Breaking in the Habit, has evolved and expanded to an online social media ministry that shares the Catholic faith through tweets, posts, blogs and videos. For his YouTube channel, he has produced nearly 250 videos that range from personal reflections to a popular series about the Franciscan vocation called, A Friar Life.

He is a member of the Holy Name Province, the largest community of Franciscan Friars in the United States, and, this year, received his Master of Divinity degree from the Catholic Theological Union in Chicago.

In 2017 he professed his final vows and came ‘home’ to North Carolina to complete an internship at Immaculate Conception. While in North Carolina, he heard Bishop Luis Rafael give the homily at Chrism Mass at Holy Name of Jesus Cathedral. It was a year and moment that would shape his ordination.

In 2018 [then] Brother Cole wrote a letter to Bishop Luis Rafael, explaining that the words of the bishop’s homily impacted him and that he will always consider North Carolina home. He asked Bishop Luis Rafael to ordain him and be homilist at his ordination Mass.

At the ordination, Bishop Luis Rafael said that he was honored and grateful to be asked to do this ordination. He expressed great admiration for the Franciscan Order and for St. Francis.

He went on to encourage Father Cole, saying that when it does seem hard, Jesus is always there, ready to help. Bishop relayed an anecdote from early in his priesthood about when a parishioner who was also bilingual said to him, "Your homilies in English are much better than they are in Spanish."

He said he was surprised to hear this since Spanish was his native language and he felt he was still learning English.

“What was the reason? I prepared my homilies in English because I couldn't speak the language. I recognized that I couldn’t speak English; I needed help. With Spanish, I say, ‘I know everything.’ It's not knowing. It's to recognize that in front of God we are called always to learn something else, something new,” the bishop said.

It is a message that may be especially poignant for Father Cole, who has become known for his messaging in such a wide range of mediums.

Recently, he has had to answer many questions about what his ordination will mean for his social media ministry. Will he have to stop? Will it change? Will he simply be too busy as an ordained priest to continue to make videos and write?

Fortunately for the thousands that follow his ministry online, he has been encouraged to continue his online ministry. He said, “My provincial has encouraged me to continue evangelizing and catechizing through social media, treating this as an essential part of my ministry rather than a hobby in my spare time.”

He has been assigned to be the director of campus ministry at the Catholic Student Center at the University of Georgia. There, in addition to writing and creating online content, he will celebrate the sacraments on campus, provide spiritual direction, guide programming and be a presence to the students.

For his part, he has always seen the two pieces, that of sacramental work and of social media evangelization, as interwoven.

“My vocation would not have lasted, and my ministry would have failed, had the two been separated,” he said. “I firmly believe that you can’t share what you don’t have, and my ministry will only be successful if it remains but a part of what I do. As soon as I cut myself off from the poor, teaching/preaching in person, celebrating the sacraments, and counseling people, I’m not sure I will have much more worth sharing online.” 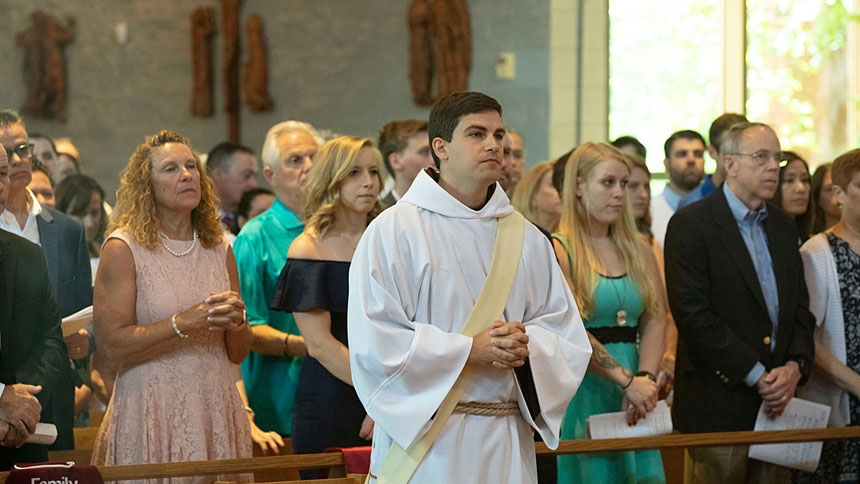 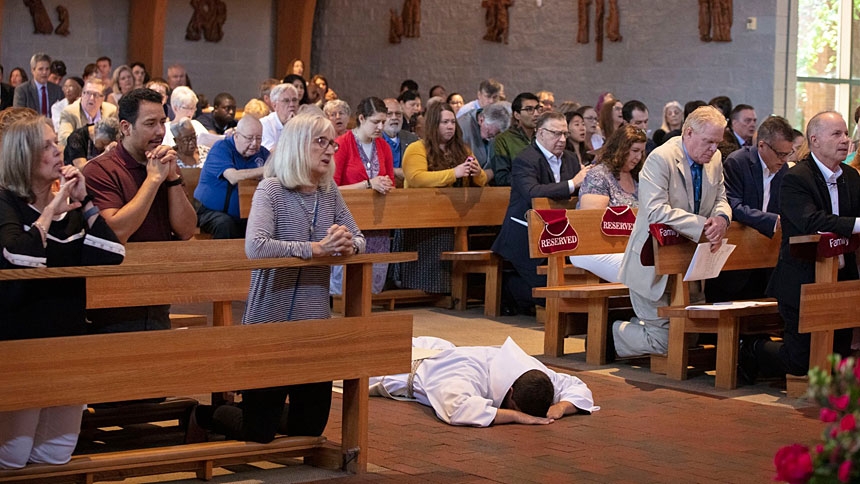 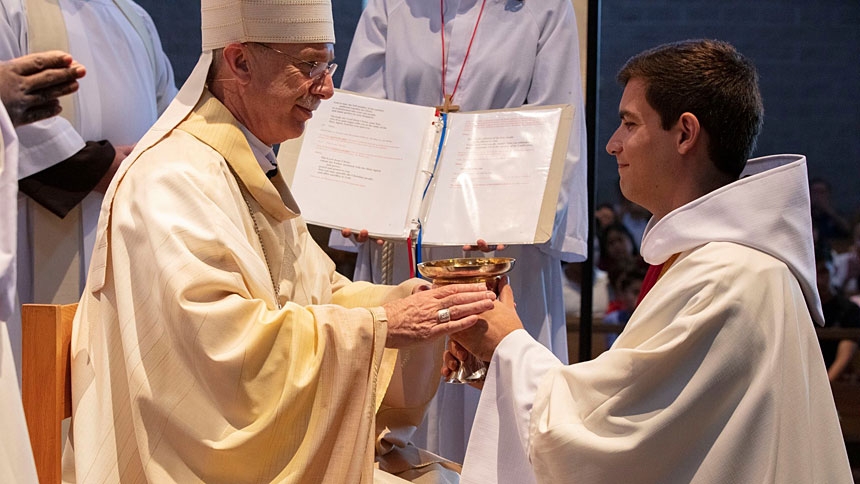 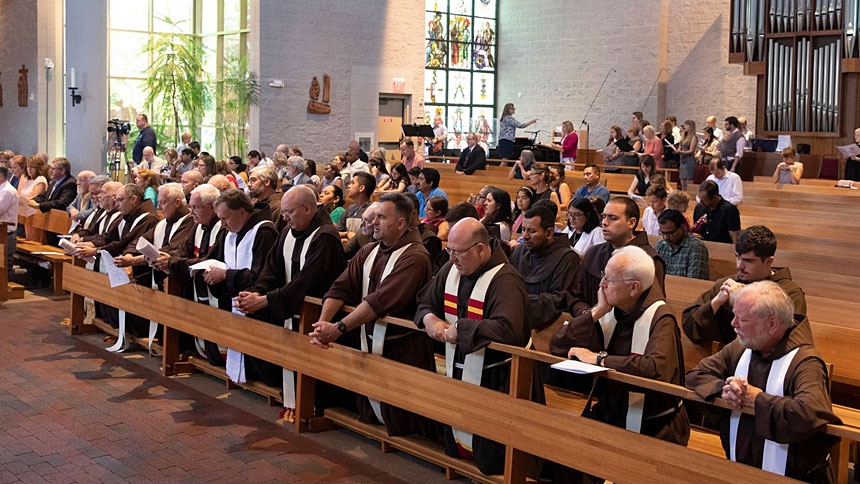