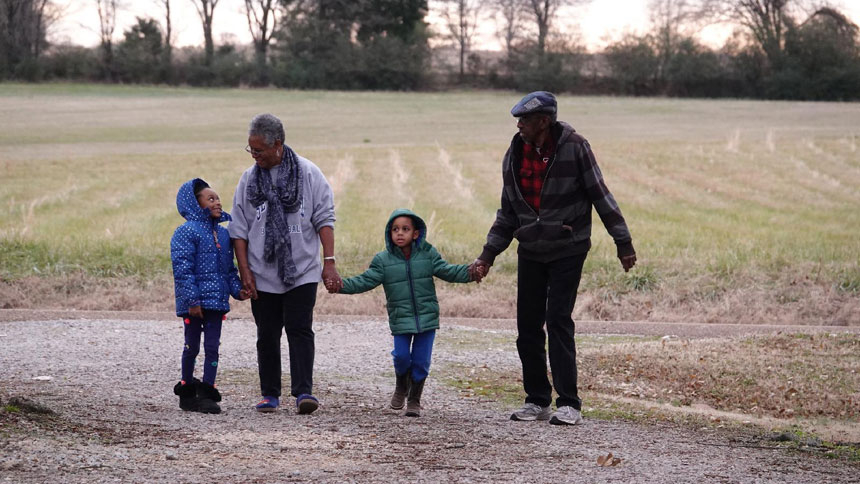 Above: Joyce Christian, along with her husband, Will, walk with their grandchildren in Somerville, Tenn., in this undated photo. She is a retired nurse who encourages African Americans and other people of color to get the COVID-19 vaccine. (CNS photo/Karen Pulfer Focht)

MEMPHIS, Tenn. (CNS) — Having the ability to educate and advocate for her family inspired Joyce Christian of Somerville, Tennessee, to become a nurse.

It has been a long, tragic pandemic and the COVID-19 vaccines are finally becoming available. Christian is on a mission to try to encourage people of color to take the vaccine.

Christian understands firsthand why many Black people and other people of color are hesitant and mistrust the medical community. Her father, Freddie Lee Tyson, was unknowingly a part of the U. S. Public Health Services Syphilis Study at Tuskegee in Alabama.

Hundreds of rural Black men in the 1930s were left untreated for syphilis even after penicillin became available. Syphilis was present already in their blood either through inheritance or some external cause.

Her father was told he had “bad blood,” and they gave him a few perks to be a part of the study. “These were good men, they had professions, and they were treated as if they were nobodies,” she said.

While Christian acknowledged past injustices, she said people today are better protected by the law and are better informed. She has seen the impact sharing her knowledge has had on others’ lives.

She wants to narrow the disparities in health care among those most in need, and she understands why some are hesitant. But she sees people in her community dying at disproportionate rates, and she feels the need to speak out, educate and advocate. “Black and brown people are dying most,” she said, and she tells them: Don’t be afraid to take the vaccine.

Christian and her family sympathize with the people who fear the vaccine because of the type of injustice her father experienced.

What happened to those men and her father, at the hands of the government, led to the establishment of the National Commission for the Protection of Human Subjects of Biomedical and Behavioral Research. Committees were established to set ethical criteria to ensure what happened to her father would not happen again.

She said her father felt bad for all the people who were in the study and that did not know they were being used in that way. It was important to him that people know that this happened.

Christian’s career has taken her all over the world, and everywhere she goes she carries her father’s story.

Descendants of the men in the study founded a nonprofit called Voices for Our Fathers’ Legacy Foundation in 2014 as a way to pay the men honor and keep their stories alive.

“My father was humble, reserved and wise. When he had something to say, it was profound,” Christian said. He was 83 when he died as the result of being hit in a car accident.

Her mother was a domestic worker. “She was so wonderful and resourceful,” Christian recalled fondly.

Her parents had a very deep faith, and they passed it down to their children. “We saw them pray. When I was in high school, I would stop by the basilica and pray to Mary for her guidance,” Christian said.

Even though they were not Catholic, when nearby Dominican nuns recruited the children to go to a Catholic school, which her father was helping build, her parents were all for it. Christian said her parents wanted their children to have the best education.

As children, they went to Mass on Sunday morning and then spent the rest of the day at their parents’ church.

Christian is still Catholic today, and she goes to St. Philip the Apostle Church in Somerville. “God had a way of planning out my life, and I thank him every day.”

“Faith has always been a big part of my life, I have survived a lot of things,” she added in an interview from her front porch. “The Holy Spirit was always guiding me.”

As a young nurse in the Air Force, she was stationed in the Philippines at Clark Air Base, then a U.S. military base, during the Vietnam War. They got all of the casualties from Vietnam. She was commissioned as a second lieutenant and was there when the POWs were released. That led to a chance meeting with the POW for whom she wore a bracelet. Wearing bracelets for POWs and MIAs was popular during and after the war.

Her bracelet had his name engraved on it, and she saw that he was coming to the base. “We received all of the POWs. I saw his name on the manifest, and I met the plane on the tarmac. I told him, ‘I was praying for your safe return!'” She remembers he was very grateful.

Her parents gave her a great sense of family.

Of her nine siblings, five are still living, and they have an ongoing prayer line. Every Sunday, they pray together over Zoom and pray together via texting every day.

“Our father taught us to be a family, and he wanted us to stay strong in our faith and persevere,” Christian said. “The family prayer line has made us even closer.”

Focht is a photojournalist in Memphis and a regular contributor to Faith West Tennessee, the magazine of the Diocese of Memphis.