Repairing a home and returning to work: recovering from Hurricane Florence 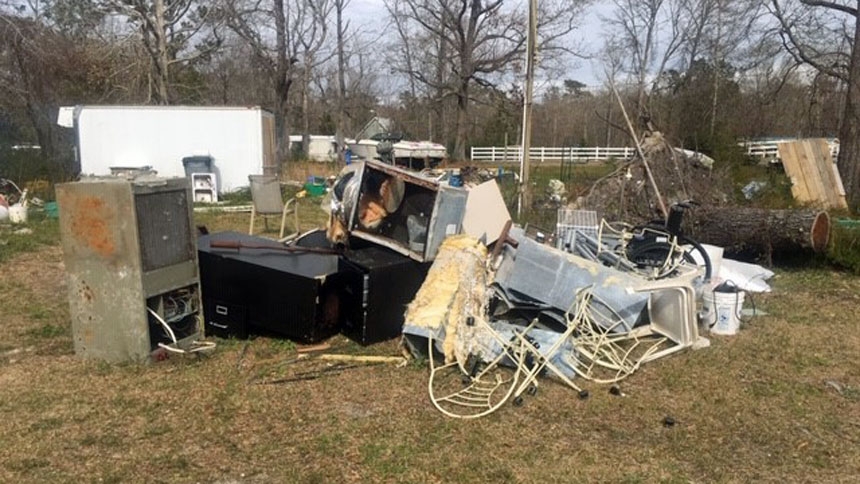 “You know what was a fun hurricane? Hurricane Bertha.” The Inscore family sits around the living room, reminiscing on past disasters. “No,” their son chimes in, “you went to your parents’ for Bertha. You’re thinking of Floyd.”

“That’s right,” answers David. “Hurricane Floyd, we stayed at the motel. The power went out, and we were the only ones with a battery. The whole building was dark, and we had the only light. All the kids were running up and down the hall when the manager showed up with a news crew. I froze; I thought we were in trouble because I was cooking out the window.” He laughs at the memory, “Turns out, they saw the light all the way from the street. They thought we might have a generator they could use to broadcast!”

As lifelong Coastal Carolina residents, the family took that lesson to heart. “For Florence, we made sure we had a little generator with us.”

Knowing the area’s penchant for storm flooding, the family of four evacuated to a local motel in preparation. Thanks to their foresight, most of their small belongings and treasured items were saved from Florence’s rainy wrath. Unfortunately, little else was spared.

Mr. Inscore, a fisherman by trade, was effectively unemployed by the storm when Florence drowned his boat’s motor. The floors and the furniture in his house were severely damaged by the rising water, and mold spread quickly up the sheetrock walls. The worst of the damage, however, was in the extension the family used as their master bedroom.

“The FEMA inspector came over and from the outside said the place was fine. Then he walked inside and said we needed to tear the whole thing down.”

Because the damage was so severe, the family was granted Temporary Shelter Assistance (TSA) through FEMA. Not ones to sit idly by, they promptly got to work making repairs – but this turned out to be a very costly endeavor. Catholic Charities was able to assist the Inscore family with purchasing rebuilding supplies. This is how the partnership with the Inscore family began: a phone call and a handful of Lowe’s gift cards.

The Inscore family then received help from the North Carolina Sheltering and Temporary Essential Power (NC STEP) Program and contributed their own good old-fashioned elbow grease to finish some of the repairs just as their TSA stay expired. Though not complete, the family’s home was livable, and they were glad to be back.

Living at home again, the Inscore family needed to replace the damaged furniture. Water and mold had rendered most of their items unusable. In addition, the loss of the extension that once served as the master bedroom meant that the family of four now had to share a two-bedroom house. “We still plan to rebuild that room, eventually, but the goal was to get back in the house. Six months of the five of us (four humans and a pooch) in a hotel room was really taking its toll on everyone.”

Through a critical partnership between Catholic Charities and The Green Chair Project, the Inscore family was blessed with an entire home’s worth of furniture within two weeks of returning home.

The one thing the family requested that The Green Chair Project was unable to provide was a pull-out couch. Since the master bedroom was lost, Mr. and Mrs. Inscore planned to set up camp in the living room space. Mrs. Inscore has some mobility issues, requires oxygen, and deals with a fair amount of recurring pain. Thus, it was very important to everyone involved that she had a safe and comfortable place to sleep. Through the generosity of local businesses, Catholic Charities was able to distribute vouchers for the Inscore family to purchase a lovely sleeper sofa from Haverty’s, a local furniture store.

Once the home was safe, sanitary and secure, Catholic Charities worked with Mr. Inscore on his next challenge – getting back to work. Mr. Inscore needed to get back on the water and reopen his fishing business. This meant he would need a replacement motor for his boat. Unfortunately, having been out of work for months and having spent so much on home repairs, purchasing a new motor was simply not feasible. However, knowing that there was only one thing standing between the Inscores and self-sufficiency, Catholic Charities staff began researching potential solutions.

Mr. Inscore was eagerly searching for a second-hand engine and having little luck when a friend helped him track down a brand new motor at a local marine shop. The community rallied around Mr. Inscore to get him back to work. Alone, Catholic Charities would not have been able to fund this motor replacement. Fortunately, there were great community partners ready to lend their support. Catholic Charities partnered with Lutheran Services and the Pender County Long Term Recovery Group to pool their resources and purchase the new motor. Mr. Inscore was officially back to work.

After volunteering with the Red Cross for years, and experiencing first-hand the devastation of a natural disaster, Mr. Inscore’s eldest son Matt landed his dream job heading up their Disaster Services program in the Lumberton region. Matt will now use his skills to help other families through this long term recovery process.

Through every step of their disaster recovery plan, the Inscores kept a positive and optimistic attitude. Whether it was reminiscing over their months at the hotel, the sense of community between their fellow displaced survivors, or planning the future renovation of the still destroyed extension, they never failed to see the positive in everything.