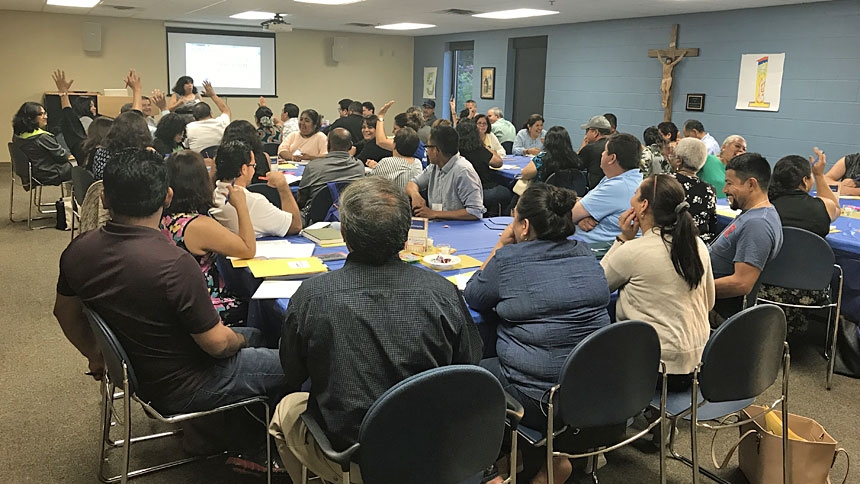 TeamRCIA just wrapped up a bilingual training institute in the Diocese of Raleigh, NC. This was a special event for us. We have done bilingual institutes before, with the help of Spanish-speaking colleagues. On this institute, we still had help. Rose M. Hernández, director of formation and evangelization in the Diocese of Fresno, led the Spanish track (thanks, Rosie!).

However, after our three-month immersion journey to Panama last year, Diana was able to communicate a lot of the goals of the institute and give instructions for the prayers and activities in both English and Spanish. My Spanish is still very basic, but I was able to pull off a short, prewritten, bilingual reflection during one of the prayers.

Working for a unified church

While we were excited to be able to communicate more effectively in Spanish, that was not the most exciting part of this institute. What was most significant was that the Diocese of Raleigh has been working hard to create a unified church among its English speakers and Spanish speakers. Their efforts paid off as equal numbers of both communities showed up for the training (about 120 people total). In his welcome statement, Director of Faith Formation Patrick Ginty generated rousing applause when he said, “This is what Catholic unity looks like!”

Praying and studying together

Both communities were together for the opening introductions and prayer on Friday evening. Then we split into language groups to explore the six core principles of the RCIA and the four disciplines of Christian life that the catechumens need to learn. We came back together at the end of the night for a closing liturgy.

The next morning, we started the day all together and did mystagogical reflection and catechesis based on the previous evening’s liturgy. Diana acknowledged to the group that trying to draw out catechetical insights in a combined language group can be a bit frustrating. It takes more time. Key comments have to be repeated in both languages. The bilingual people in the room can get a little bored hearing the same thing twice.

But Diana pointed out the huge advantage of doing mystagogy together. She said our mission is to go out to bring the good news to people on the peripheries—people who are different than us. When we take the time to practice sharing our faith and our insights with our brothers and sisters inside the church who are different than us, it teaches us how to bring good news to strangers who are outside the church.

After the mystagogical reflection, we split into our language groups again and spent the rest of Saturday going over practical methods for implanting the six principles and the four disciplines of Christian life. We came together on breaks and for lunch.

The power of the Holy Spirit

This event was one of those moments when you can feel the power of the Holy Spirit working. I think there are great things in store for the Diocese of Raleigh. With the kind of commitment, dedication, and faith that we experienced from the RCIA leaders and teams this past weekend, it is clear that God is working mighty deeds in North Carolina. I can’t wait to see what happens.

(I also want to give a shout-out to Jason Lillis, TeamRCIA’s digital assistant. Jason has been working with us for three-and-a-half years, and we met him for the first time face-to-face on this event! He made everything about the institute a lot easier for all of us. Thanks, Jason!)