'Off to the races' and drawing the faces: Local artist has special connection to Father Thomas Price 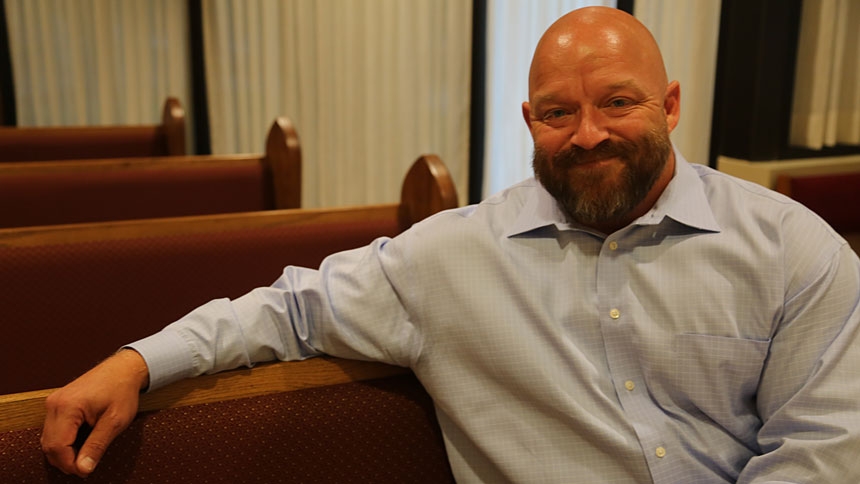 It all started with an assignment. David Myers was a student at UNC-Wilmington in the late 1990s and needed to write a paper about an interesting North Carolinian.

Born and raised in Durham, Myers was familiar with his parents’ Southern Baptist faith. But he was curious about other traditions and a Catholic friend led him to St. Mary Church, where he met Father Thomas Hadden.

Looking back, Myers suspects that he wanted to write that paper about the priest, who was one of the first black priests in the state.

“But he either was too tired of talking about his own story or just wanted to steer me in a different direction,” Myers says. “He said, ‘You need to learn about Father Price.’”

The two men talked about Father Price, who was originally from Wilmington and known as the Tar Heel apostle because he was the first native North Carolinian ordained a Catholic priest.

“From then I was kind of off to the races with my research,” Myers says.

He visited a public library, which had a copy of Father Price’s journal. He visited diocesan archives in Raleigh. He came across a copy of the Tar Heel Apostle, a biography.

“I read the whole thing,” Myers says with a certain amount of college-era humor and disbelief. “When I started to learn about him, there was a magic to it. The book was set in places that were very familiar to me ... Newton Grove, Clinton, Wilmington, Asheville and Raleigh.”

Between reading what Father Price wrote and what others wrote about Father Price, Myers was beginning to learn the priest’s wit, charm and heroism. He read about Father Price’s time as a missioner serving outside the United States, but enjoyed the domestic stories best.

Some of Myers’ favorite ones involved humor that Father Price would use to disarm an audience that may not have been welcoming to a Catholic in the early 1900s in the south.

“There was one situation where he went to a town here in North Carolina …. people came armed with refuse – lettuce and tomatoes and everything else,” Myers says. “They threw all this stuff at him and he stopped and looked around and said something like, ‘If I had some beef, I could make a nice stew.’ And everyone laughed. And he had them listening from that moment forward.”

Myers, an art major, did what came naturally to him. He drew.

“Any time I have been really inspired by someone, I have done a drawing … the first one I did of Father Price was in charcoal,” he says.

Myers talks about Father Price the way a proud nephew speaks of a favorite uncle. “Every town he went to he built a church,” Myers says with emphasis on the word every. “And he named them all after different titles of the blessed mother [Mary].”

During his college years, Myers developed an appreciation not only for Father Price, but for the Catholic faith, too. He wanted to become a full member of the Church and enrolled in RCIA, a program through which adults receive the sacraments of initiation.

But before his graduation and confirmation, he received devastating news. At age 22, he learned he had stage four testicular cancer.

Sitting with his dad in a room at Duke Hospital, Myers wondered aloud if he could be confirmed before the Easter vigil. His father made some phone calls, and hours later Myers received the sacraments of reconciliation, Eucharist, confirmation and anointing of the sick.

“It was not what I had envisioned, but it was what it was supposed to be,” Myers says of the experience. “It was helpful to me that my family was part of it … right there in my hospital room.”

He went through nine months of chemotherapy and surgeries. During that time, he thought often of Father Price, who – as a Maryknoll missioner in China – suffered and died from appendicitis.

“One of the last treatments I had was an abdominal surgery, and he died in abdominal surgery, so I remember thinking of that and gaining some peace from that and his experience,” Myers says. “He was in a much worse system as far as healthcare and what was available to him … there have been many times that I have asked him to pray for me.”

Since that experience with cancer, there have been many times Myers was inspired by Father Price and called to create.

Myers drew a scene from a shipwreck which Freddie Price, as he was known then, experienced in 1876 before he went to seminary to become a priest. Looking back, Myers says he got it all wrong.

“It’s not accurate. He was in a steamer. He wasn’t in a wooden vessel,” he says. “It’s just the way I pictured it. It was the way I had it in my head when I read the book. That story really moved me because there’s a sense of the miraculous [because he survived.]”

There are other elements he got right, though. As an artist, Myers draws (early in his career in charcoal, later in graphite) from photos of Father Price. From the images, he picks up on what he believes to have been the priest’s personality.

Myers believes, because of the grimaces that the priest showed, that Father Price didn’t like having his photo taken.

“He was very much uncomfortable about that,” Myers says. “Also, he’s got his office [prayer book] under his arm. And he’s wearing a silver band covered in leather so that it wouldn’t draw attention. He wasn’t showy … his cassocks were just kind of tattered. He was on horseback all the time. That’s how he got from mission to mission and place to place.”

Myers gave away most of the original drawings of Father Price to priests in the diocese.

It’s for the best, he concedes.

“My wife is tired of my drawings anyway,” he laughs. “But seeing my drawings on a holy card was wonderful. To be at the cathedral when they started the cause for sainthood for Father Price and sit there with my wife and son and holding that … it was neat.” 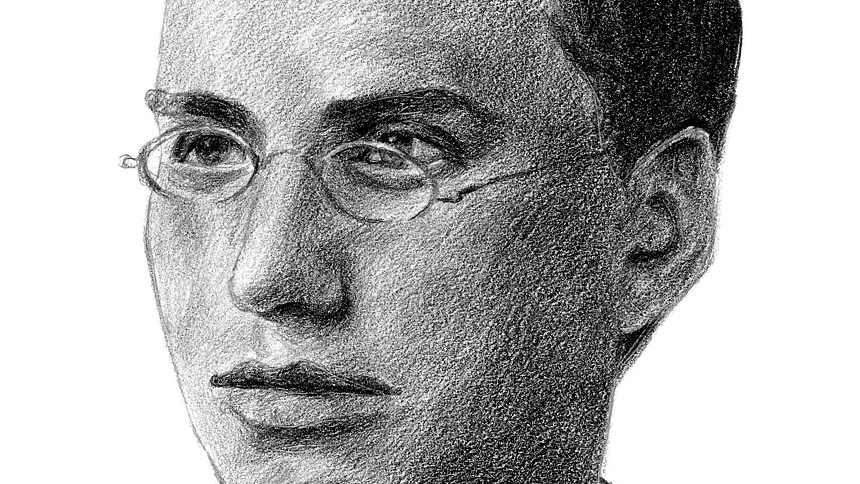 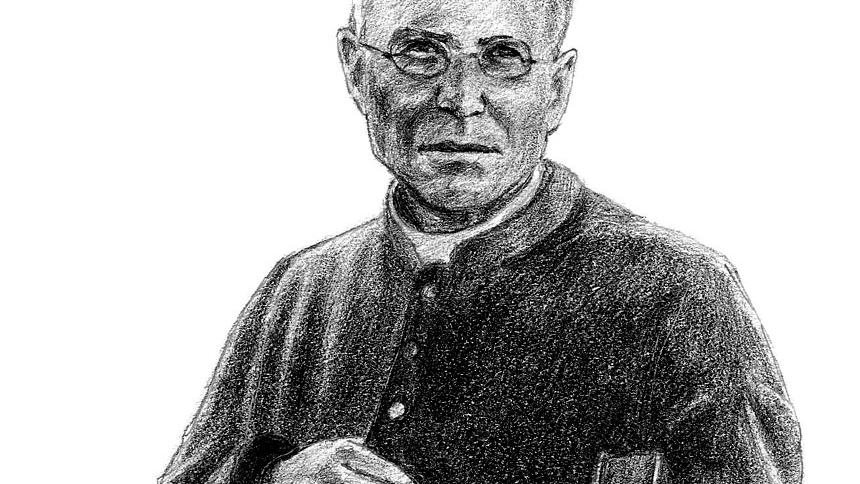 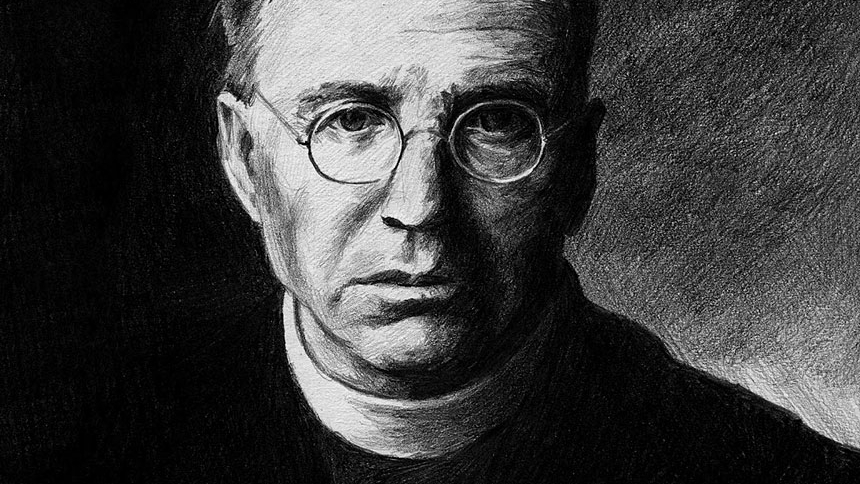 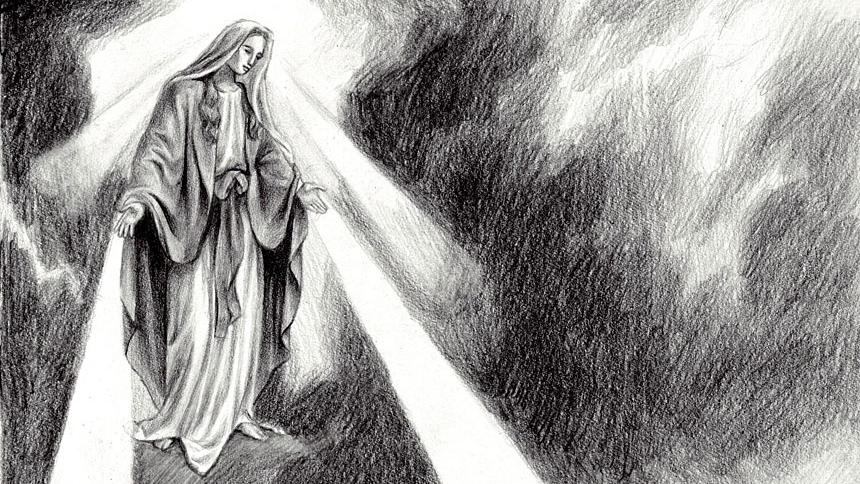