Pope: Spiritual consolation is deep joy that motivates one to ‘do good’ 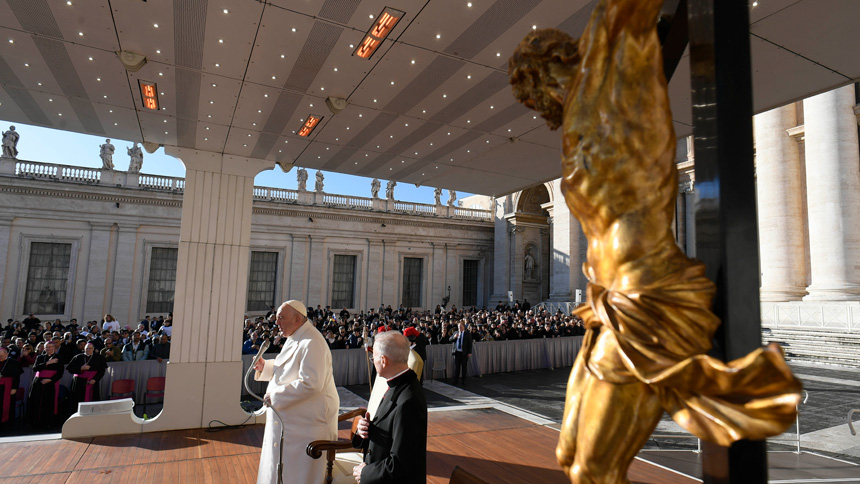 VATICAN CITY (CNS) — The spiritual practice of discernment, of seeing where God is at work in one’s life and what God is calling one to do, includes examining what brings a sense of consolation and spurs one to do good, Pope Francis said.

Spiritual consolation “is a profound experience of interior joy, consisting in seeing God’s presence in everything. It strengthens faith and hope and also the ability to do good,” Pope Francis said Nov. 23 at his weekly general audience.

Since late August, the pope has been using his general audience talks to explain discernment, especially as taught by St. Ignatius of Loyola, founder of the Jesuits. Although focused on making decisions, as a spiritual practice it involves not only looking at what is good and bad, but also examining one’s life and feelings to notice where God is at work and where God may be urging one to go.

Of course, everyone would like to experience spiritual consolation, the pope said. But it is a gift of the Holy Spirit and brings a joy that is not superficial.

“Consolation is an interior movement that touches our depths,” the pope said. “It is not flashy but soft, delicate, like a drop of water on a sponge,” as St. Ignatius described it.

Consolation is seen in the lives of “many saints who were able to do great things, not because they thought they were magnificent or capable, but because they had been conquered by the peaceful sweetness of God’s love,” he said. “This is the peace that St. Ignatius discovered in himself with such amazement when he would read the lives of the saints” and “the peace that Edith Stein felt after her conversion.”

“To be consoled is to be at peace with God, to feel that everything is peacefully settled, everything is harmonious within us,” the pope said.

But, he said, the consolation from God does not make a person want to just “sit there enjoying it, no, it gives you peace and draws you to the Lord and sets you on the way to do things, to do good things.”

“In times of consolation, when we are consoled, we get the desire to do so much good, always,” he said. It is the opposite of when a person is in spiritual desolation or sadness and has the urge to withdraw “and do nothing. Consolation pushes you forward, in service to others, to society, to people.”

However, the pope said, “we must be attentive. We must distinguish between consolation that is of God and false consolation,” which is a weak imitation.

“If authentic consolation is like a drop on a sponge, soft and intimate, its imitations are noisier and flashier,” he said, and it leads people to focus only on themselves and not reach out to care for others.

“False consolation can become a danger if we seek it obsessively as an end in itself, forgetting the Lord,” the pope said. “As St. Bernard would say, this is like seeking the consolations of God rather than the God of consolations.”