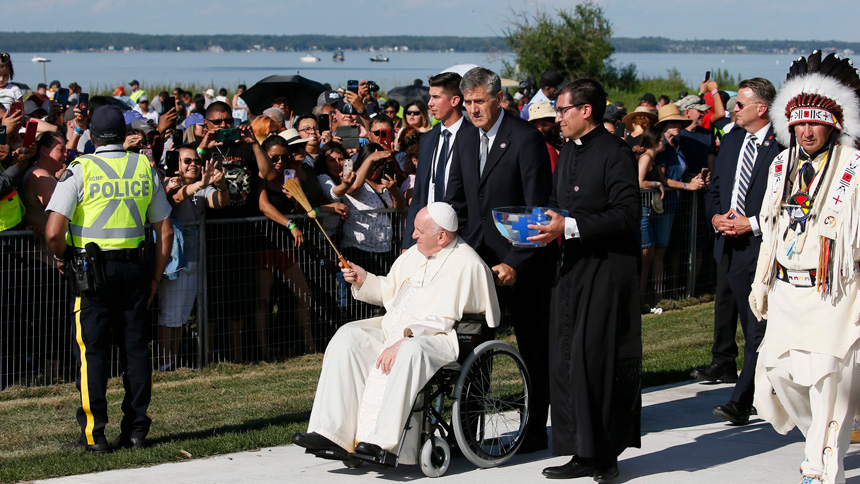 Above: Pope Francis blesses the crowd as he participates in the Lac Ste. Anne pilgrimage and Liturgy of the Word in Lac Ste. Anne, Alberta, July 26, 2022. (CNS photo/Paul Haring)

LAC STE. ANNE, Alberta (CNS) -- Pope Francis joined Indigenous pilgrims at a lake known for miraculous healings and encouraged them to lay their burdens on the shore.

Since the 1880s, the Cree and the Sioux, the Métis, the Blackfoot, the Dene and others from across Turtle Island -- North America -- have traveled to Lac Ste. Anne, about 45 miles west of Edmonton, for a pilgrimage around the July 26 feast of Sts. Joachim and Anne.

Like most of the 40,000 pilgrims who make the journey each year, Pope Francis paused at a statue of St. Anne on his way to the water, paying tribute to Jesus' grandmother.

Near the lake, known for its healing properties, the pope stopped to pray facing the East, then the South, then the West. Finally, facing the North and overlooking the lake, he blessed the water, just as bishops have done for decades at the start of the pilgrimage each year.

An aide then pushed Pope Francis in his wheelchair to the very edge of the lake. The Alberta health department advised pilgrims not to go into the water because of a blue-green algae or cyanobacteria bloom.

Father Cristino Bouvette, an Indigenous priest who helped plan the pope's prayer, told Catholic News Service that Indigenous people face the four directions of the compass in prayer to remind themselves of "the omnipresence of the Creator and that all creation belongs to him."

Oblate Father Garry LaBoucane said he has been organizing the pilgrimage for "20 or 30 years" and has been making the annual trip to the lake since he was a boy -- about 70 years in total.

"None of us ever dreamed that Pope Francis would come here," he told CNS. "When we heard he would come to Canada, we knew he wouldn't come here -- there were just too many issues with access and security and facilities."

But, he said, the "walking together" theme of the papal trip and the commitment to reconciliation has been seen in every preparation meeting and in every interaction between the pilgrims, the police, the clergy, the medics and the traditional healers.

Organizers said about 10,000 people were at the papal event. And, as on every stop during his visit to Canada July 24-29, Indigenous drummers accompanied Pope Francis' visit to the lake and the Lac Ste. Anne Shrine -- but the song Eugene Alexis played on the shore was special and ancient.

According to tradition, the Stoney Nakoda people moved up to the area from the Dakotas because their chief received a vision of the lake in a dream; his people would know they had arrived at the right place when they heard the words of the song Alexis sang whispered on the treetops surrounding the lake.

Saying that "all of us need the healing that comes from Jesus, the physician of souls and bodies," Pope Francis prayed with thousands of pilgrims gathered on benches in the shrine.

"Lord, as the people on the shores of the Sea of Galilee were not afraid to cry out to you with their needs, so we come to you this evening, with whatever pain we bear within us," he said. "We bring to you our weariness and our struggles, the wounds of the violence suffered by our Indigenous brothers and sisters."

"In this blessed place, where harmony and peace reign, we present to you the disharmony of our experiences, the terrible effects of colonization, the indelible pain of so many families, grandparents and children," he continued. "Help us to be healed of our wounds."

He prayed to Jesus for "the intercession of your mother and your grandmother."

He addressed the grandmothers present in the crowd, too, saying their hearts "are springs from which the living water of faith flowed."

"I am struck by the vital role of women in Indigenous communities," the pope said. "They occupy a prominent place as blessed sources not only of physical but also of spiritual life."

The 85-year-old pope, who has spoken often of the love and wisdom of his Grandmother Rosa, told the pilgrims that it was from her that "I first received the message of faith and learned that the Gospel is communicated through loving care and the wisdom of life."

"Faith rarely comes from reading a book alone in a corner; instead, it spreads within families, transmitted in the language of mothers, in the sweetly lyrical accents of grandmothers," the pope said.

With the suffering of Canada's First Nation, Inuit and Métis people never far from his mind, Pope Francis noted how the Lac Ste. Anne pilgrimage has brought different people together in peace and harmony for decades.

Speaking the day after solemnly apologizing for the role Catholics in Canada played in running residential schools, tearing Indigenous children from their families and cultures, Pope Francis presented another side of the church's history with Indigenous people.

"At the dramatic time of the conquest, Our Lady of Guadalupe transmitted the true faith to the Indigenous people, speaking their own language and clothed in their own garments, without violence or imposition," he said.

And many missionaries helped preserve Indigenous languages and cultures by making grammar books, dictionaries and catechisms in the local languages, he said.

"Part of the painful legacy we are now confronting stems from the fact that Indigenous grandmothers were prevented from passing on the faith in their own language and culture," the pope said.

Gathered on the lakeshore, "immersed in creation," he said, "we can also sense another beating: the maternal heartbeat of the earth. Just as the hearts of babies in the womb beat in harmony with those of their mothers, so in order to grow as people, we need to harmonize our own rhythms of life with those of creation, which gives us life."