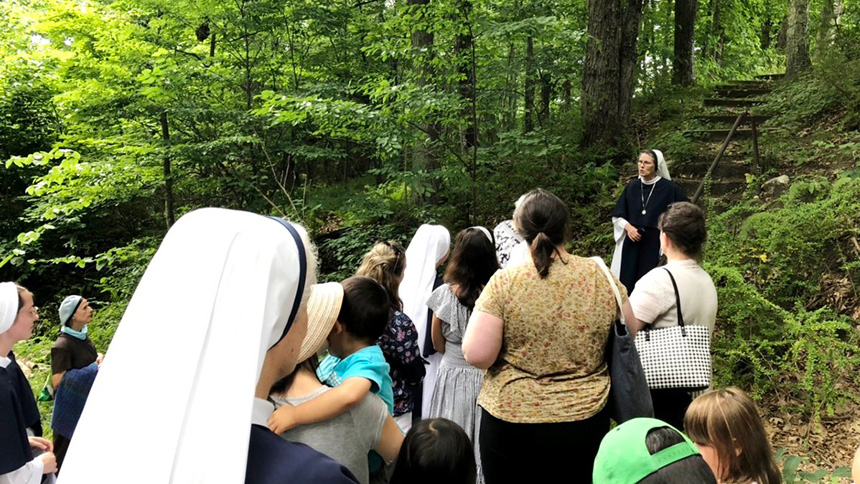 Above: Sister Veronica Sullivan, a Sister of Life, talks about the "McGivney steps" near St. Thomas Cemetery in Thomaston, Conn., in early August 2022. Blessed Michael McGivney, a sainthood candidate, founded the Knights of Columbus in 1882. (CNS photo/Andrew Fowler)

NEW HAVEN, Conn. (CNS) -- Christopher Casey, a college student from Philadelphia, has only come to learn about Blessed Michael McGivney by attending Mass at St. Mary's Church in New Haven, where the parish priest founded the Knights of Columbus in 1882 and where he is laid to rest.

The student has lived in the Elm City, New Haven's nickname, for the past 11 weeks, recently completing an internship at a local pharmaceutical company.

On Aug. 13, they were among 50 pilgrims -- composed of religious, families and others -- who visited sites of significance in the life and spiritual formation of Blessed McGivney in Waterbury and Thomaston, Connecticut.

The tour coincided with the liturgical memorial of Blessed McGivney, observed annually in the Archdiocese of Hartford, and the second since his beatification Oct. 31, 2020. The feast day falls between his Aug. 12 birth and his Aug. 14 death.

"We felt it was worthwhile to try to give those that are devoted to Father McGivney a greater perspective of his lifetime," said Peter Sonski, the education outreach director at the pilgrimage center. "We organized these trips that would lead people to some of the sites that they might not be as familiar with."

Participants walked in the literal footsteps of Blessed McGivney's life -- including an opera house stage and steps at a local cemetery.

They also were presented with several lectures regarding his relevancy in the 21st century, witnessed the unveiling of a refurbished statue dedicated to the American blessed in Waterbury and heard testimony from a family who reportedly received a favor from his intercession.

"It was great to be in the space Father McGivney inhabited, worked in, did his ministry in -- I think that helped me contextualize who he was and his life," Casey said.

At the Thomaston Opera House, Joseph and Megan Hermosillo of Frederick, Maryland, along with their six children (ages 2-12), were invited to the stage to give testimony of receiving a favor they said was granted by the intercession of Blessed McGivney.

More than a century earlier the priest had graced the same stage to perform in theater productions such as the Irish folk play "Handy Andy."

The couple said they prayed to Blessed McGivney and that his intercession saved Joseph from dying of COVID-19. What was a mild case became life-threatening, and Joseph had to be placed on a ventilator Jan. 8.

When they sought someone to pray to, a trusted pastor pointed them to Blessed McGivney. With their prayers, Joseph began to show improvement.

The couple then contacted the Blessed Michael McGivney Pilgrimage Center requesting a relic to venerate as part of the prayer campaign for Joseph’s healing. A relic was eventually transported to the hospital in Maryland.

Joseph was blessed with it, and four days later he was removed from the ventilator. He made incremental progress until he could be discharged. In total, he spent 32 days in the hospital. Today, he has made a full recovery.

One of the leaders of "In the Footsteps of Blessed Michael McGivney" pilgrimage, Sister Veronica Sullivan, has her own story to share about praying to the Knights founder on behalf of someone -- her brother.

The Sister of Life, who has had a deeply spiritual connection with Blessed McGivney for nearly 20 years, said that in 2006 she suddenly awoke in the middle of the night, overcome with an urgent need to pray for someone.

That someone, she eventually discovered, was her brother Dennis, who had suffered a massive heart attack. His chances of surviving were grim. He had no pulse for more than 40 minutes. Even if he survived, he would surely have long-term brain damage.

Visiting him in the hospital, "I didn't even recognize him in the bed," Sister Sullivan said. His body had swelled to three times its normal size.

She went to the hospital window, pleading with God that "this can't happen" for her mother's sake; her mother had recently lost her husband and oldest son. In that moment, she felt an urge to pray for Father McGivney's intercession.

"I went to my brothers, Jim and John, and I said, 'I think we need to go to the tomb of Father McGivney. I'm just overcome with a sense we should pray to him for a miracle for Dennis,'" she said.

While at St. Mary's Church, she felt a presence in the pew during her intense prayer.

"I knew he was there. And I heard a voice clearly ask me, 'Tell me what I have to do.' Instantly, I felt awake," she recalled. Formerly a cardiac nurse at St. Raphael Hospital in New Haven, she listed what needed to happen, praying for no brain damage.

After the presence departed, she felt at peace believing Dennis would survive. Within hours, Dennis' prognosis positively reversed. He lived another healthy 12 years.

Since then, Sister Sullivan has assumed a responsibility for researching, preserving and sharing insights into Father McGivney's life.

For the "Footsteps" pilgrimage, she guided the participants to the former site of St. Thomas Church where the blessed was a pastor for six years until his death in 1890. The site is marked only by a yellow rope on the slope of a highway.

The new St. Thomas Church is now on the other side of the tracks, closer to the center of town on "Father McGivney Way."

The tour then proceeded to St. Thomas Cemetery, specifically to walk several stone steps imprinted in the hillside near an old horse-and-buggy path. In Blessed McGivney's time, the steps were the cemetery's original entryway -- another tangible link to the priest's past, which is now regularly maintained by local Knights of Columbus councils.

"He's become very real to me, very personal to me, almost like family," Sister Sullivan said. "I love seeing other people come to know him and I love to make him real for them.

"That's what these tours typically do -- they help people come to know him to be just an ordinary neighbor, brother, parish priest yet extraordinary in every way."

Following the excursion in Thomaston, the tour returned to Waterbury for a vigil Mass at the Basilica of the Immaculate Conception.

With a relic of Father McGivney in their midst, attendees were invited to process from the basilica to a circle at a nearby intersection for the unveiling of a refurbished statue of Waterbury's native son. The original was initially erected in 1957 to commemorate the 75th anniversary of the Knights of Columbus' founding.

"May the vision of Father McGivney, son of Waterbury and son of the church, be an inspiration in our own call to preach the Gospel," said Father Jim Sullivan, rector at the basilica and brother of Sister Sullivan, as the statue was unveiled.

Blessed McGivney's great-grandnephew John Walshe, who attended the 1957 ceremony, helped take the drapes off his relative.

Based on the enthusiastic turnout for the Aug. 13 pilgrimage, the Blessed McGivney center plans to provide more such trips.

"When he is canonized, and I believe he will be, we're going to have that interest," Sonski said. "People are going to want to come here, and they'll want to know more about him and have this experience that some of the people had today."