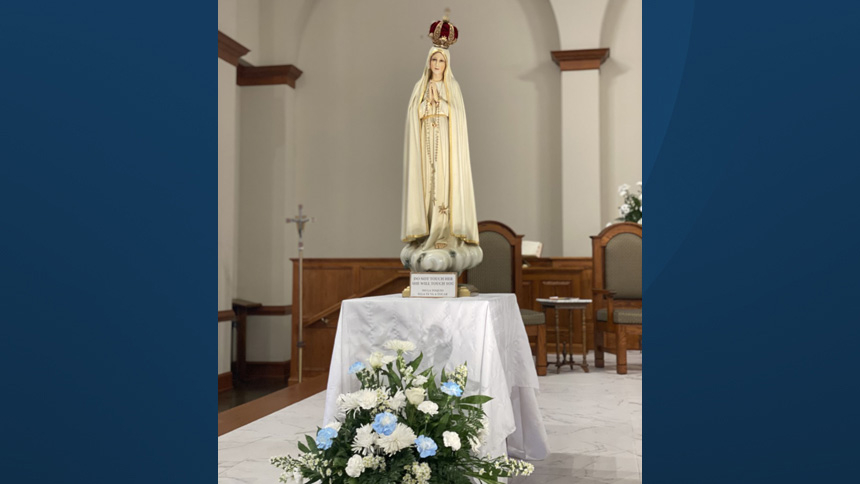 Dozens of Catholics from across the Diocese of Raleigh traveled to St. Stephen the First Martyr Church in Sanford on Wednesday morning to welcome the International Pilgrim Virgin Statue of Our Lady of Fatima and venerate and pray before the statue during the entire day.

The statue has visited all 50 states and more than 100 countries since 1947 to bring Our Lady’s message of hope, peace and salvation to millions of people across the world.

Larry Maginot, the statue custodian with World Apostolate of Fatima, addressed the parishioners who attended the morning prayers and told them, “Mary appeared in Fatima in 1917 to warn people sin was increasing and faith was weakening.” Maginot invited them to pray and to offer their suffering to God as a means of saving the souls of sinners.

In 1917, Our Lady made her sixth and most recent apparition at the Cova da Iria in Fatima, Portugal, to three shepherd children, Lucia dos Santos and her cousins Francisco and Jacinta.

Lucia, who was the oldest of the three children and the only one who lived through adulthood, got together with the statue’s artist to explain to him how the Lady appeared.

“When Lucia saw the statue, she said that it was the closest representation of the Virgin Mary that she had seen,” said Maginot.

“For those who know history, remember that 1917 was in the middle of the First World War; back then they called it the global ‘Great War.’ They didn't know there would be a second. It was going to be the war that would end all wars.” explained Maginot. At Fatima, Our Lady ended her initial message in May with the direction, “Pray the Rosary every day in order to obtain peace for the world and the end of the war,” he said.

Deacon Bob Bridwell was a part of the healing ceremony, where participants pray for friends and family who are sick or for personal healing. “It’s been just a marvelous event on a grand and glorious day,” he said. “We had visitors from a lot of different communities this morning. It has given us an opportunity to talk about peace and unity in this world, which was a special message of Our Lady of Fatima when she appeared to the three shepherd children,” Deacon Bridwell continued.

Those in attendance took turns kneeling before the beautiful image of Our Lady of Fatima, who wears a white and gold robe, a rosary and a crown.

Small groups of people came all day to pray in front of the statue of Our Lady. The people did not come and leave quickly though.  Many of them spent time in quiet prayer and waited to receive a blessing from a priest on behalf of Our Lady.

The visitors prayed for their families, for conversions, for jobs and many other intentions. But many came to pray for physical healing.

Sandra Mejia and her family were among the visitors. She said that this is the second time that she had the opportunity to visit the statue and believes that the Virgin healed her mother.

“This time I brought my three-year-old daughter and my newborn son to see the Virgin. I believe that the Virgin of Fatima hears my prayers and healed my mom, who was very sick at the time of our first visit,” said Mejia

The visitation of the National Pilgrim Virgin Statue ended with an hour of holy prayer, music and an enthusiastic farewell ceremony.

Learn more about helping spread the message of Fatima and the next location.