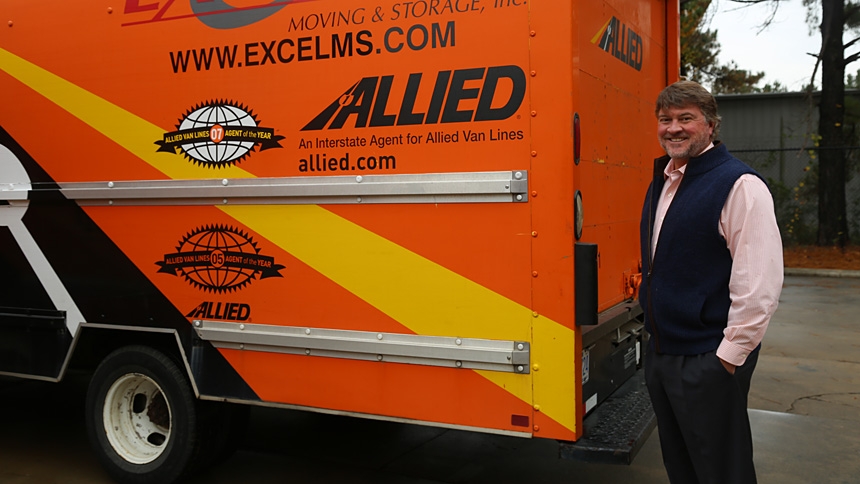 It’s Sept. 19, just days after the storm. In many parts of the state, rain has ceased and the sun is shining. Following days of rain, people in some areas of North Carolina wait for their bodies of water to crest. Some are beginning to return to their homes, others cannot due to flooding and closures of parts of major highways such as I-40 and 1-95.

National relief organizations, such as Americares and Food for the Poor, want to send supplies to impacted areas, but the large tractor trailers they traditionally employ can only travel on the major highways in North Carolina.

Only backroads can access the impacted areas, and only smaller trucks can travel the backroads. For Catholic Charities of the Diocese of Raleigh, that’s a problem.

Smaller trucks are available, but warehouses are needed to be temporary homes for large amounts of goods between arrival time of the large trucks and departure time of the smaller trucks.

Enter Jim Dorsett, owner of Excel Moving and Storage and a 20-year parishioner at St. Raphael Parish in Raleigh.

“We are very lucky to have a community that supports us in these efforts,” Gabby Amos, of Catholic Charities, said. “The fact that local businesses, like Jim’s, are able to utilize their employees and their time to help us has exponentially made the process more quick. We’ve had forklifts and pallet jacks to unload tractor trailers when our normal option would be Catholic Charities employees cutting boxes open and hand unloading cases.”

For his part, Dorsett doesn’t see what he does as anything special.

“We’re just helping out … loading one of the trucks outbound today,” he smiled. “In a time of need, everybody needs help. People in eastern North Carolina have been devastated and we are fortunate enough to have a roof over our head and a facility that works so we may as well utilize it.”