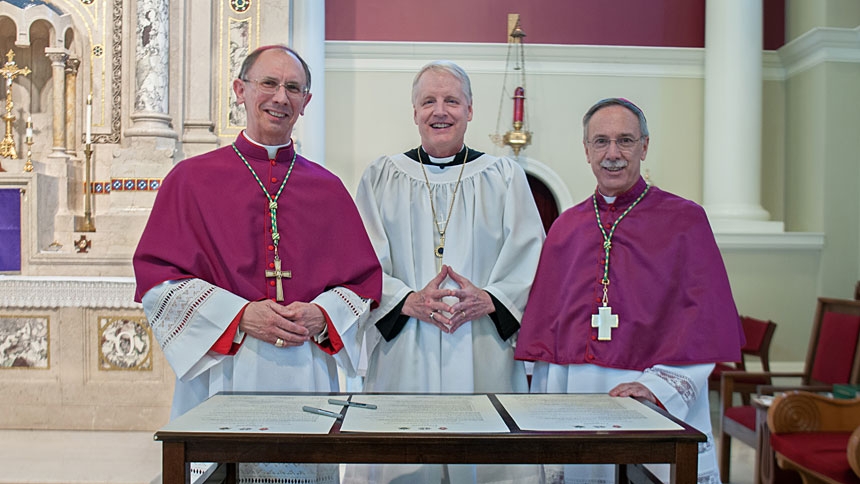 SALISBURY — The three leaders of the Roman Catholic and Evangelical Lutheran churches in North Carolina were all smiles March 29 as they gathered to pray together and reaffirm their commitment to Christian unity.

Each bishop took turns reading the covenant aloud to the congregation of Catholics and Lutherans from across North Carolina: “Inasmuch as all unity comes from the unity of the Triune God – Father, Son, and Holy Spirit – we are called to make that given unity more visible among us,” the covenant stated in part.

In welcoming remarks as host, Bishop Jugis pointed out the larger-than-life statue of the Sacred Heart of Jesus perched atop the high altar inside the church. Looking up at it, Bishop Jugis noted that it must have been a similar image to what the apostles saw when the Risen Jesus ascended into heaven.

The image of Jesus, with His arms outstretched in blessing, reminds us “that we are always under the protective blessing of Our Lord,” Bishop Jugis said.

The Lutheran-Catholic Covenant is inspired by the Risen Lord, he said, and by His prayer “that they may all be one, as you, Father, are in me and I in you, that they also may be in us, that the world may believe that you sent me” (Jn 17:21).

Monsignor Douglas Reed, a Catholic priest, and the Rev. Wolfgang Herz-Lane, a Lutheran pastor, drove together from Cary to attend the covenant signing ceremony.

“It’s important to me that the Catholic Church and the Lutheran Church are talking, that they’re committed to dialogue,” said Monsignor Reed.

“We’ve come a long way” in bridging the longstanding divide between the churches, added Rev. Herz-Lane, “but we have a long way to go.”

Four people from Hendersonville, including the co-convenors of the Lutheran-Catholic Covenant between Immaculate Conception Catholic Church and Grace Lutheran Church, also attended the ceremony. Their parish-level covenant, signed in 2016, was inspired by the diocesan-synodical covenant.

“For 450 years the Catholics and the Lutherans threw stones at each other. Now we are talking,” said the Rev. Carl MacKenzie, a retired Lutheran pastor who took part in one of the first such ecumenical covenants in Chicago in 1989. “We’re not trying to convert everyone to one side or other,” he added, but like siblings who haven’t spoken to each other in years, Catholics and Lutherans must make an effort to reconcile, forgive and reacquaint themselves in order to restore their relationship.

“It’s been a lifetime of prayer of mine,” the Rev. MacKenzie said. “I’m very happy to see us progressing in this journey and hope more people get caught up in the spirit of unity.”

The 2019 covenant signing is the latest restatement of ecumenism among the North Carolina churches, an effort that their predecessors began in 1991.

Monsignor Michael Shugrue served as the ecumenical officer for the Raleigh diocese back then. He recalls the three bishops – Bishop Joseph Gossman of Raleigh, Bishop John Donoghue of Charlotte, and Bishop Michael McDaniel of the Lutheran Synod – developed a close personal relationship and spent a lot of time together. They even shared a week-long retreat at a Trappist monastery, and soon after they were inspired to establish the Lutheran-Catholic Covenant, he said.

The agreement called for the Lutheran and Catholic churches to pray for each other, collaborate “for more effective ministry” and appoint liaisons between diocesan and synodical ministries, institutions and agencies.

Copies of the covenant were sent to every Catholic and Lutheran church in the state to be posted on their walls for everyone to read.

The close relationship between the three North Carolina church leaders was continued by their respective successors, who reaffirmed the covenant in 1996, 2001 and 2007.

Monsignor Shugrue said he is proud of the legacy of the Lutheran-Catholic Covenant, but he also knows it is a work in progress – requiring people of goodwill today to affirm its principles anew. Pointing at the covenant with its long list of practical steps people are encouraged to take to foster unity, he said with a smile, “If you can’t find something here to do with a Catholic or a Lutheran, you’re not alive.”

Their effort has been part of the Church’s larger journey towards unity coming out of the Second Vatican Council. Dialogue has so far produced agreements on the doctrine of justification, resolution of the theological conflicts of Martin Luther, the recognition of one baptism for the remission of original sin, and the dogma of the Nicene Creed.

In 2016 Pope Francis joined Lutheran leaders in a joint ecumenical commemoration of the 500th anniversary of the posting by Martin Luther of The Ninety-Five Theses in 1517, which sparked the Protestant Reformation. 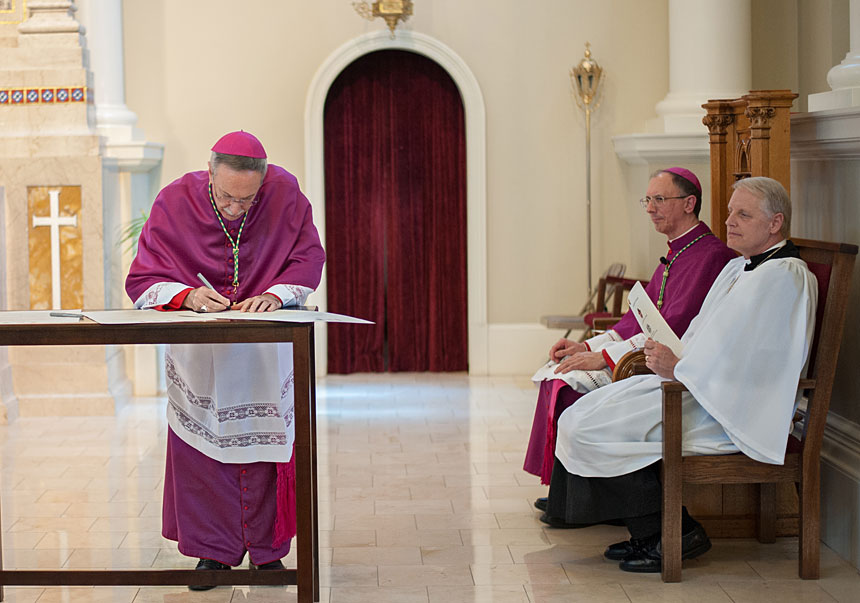