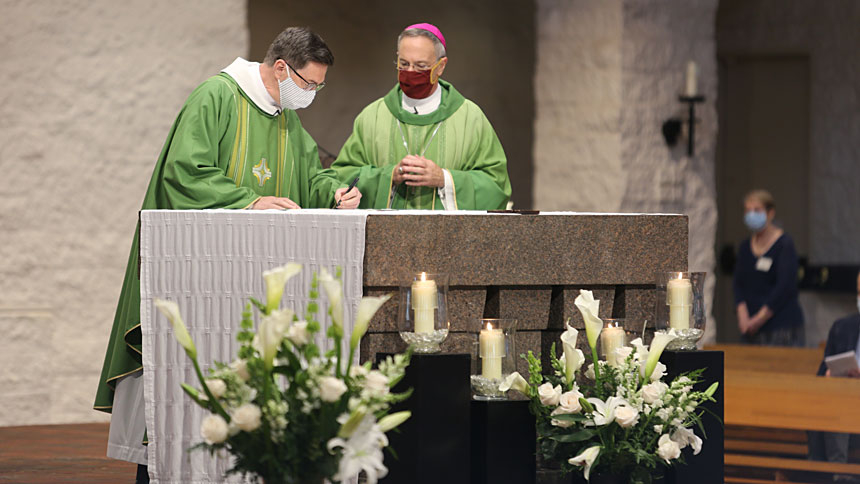 It was a return, of sorts, as Monsignor Clay has been a priest for the Diocese of Raleigh since his 1980 ordination but has spent the past eight years assigned to The Catholic University of America in Washington, D.C. as an associate professor, department chair of Pastoral Studies and associate dean for graduate ministerial studies.

Prior to his service at the university, he served at several parishes in eastern North Carolina and held leadership roles at the diocese.

His new role at St. Francis marks a change, not just for him but for the parish, which has been served by the Franciscan Friars of Holy Name Province for more than three decades.

In January 2020, the order -- which is known as HNP -- announced they were withdrawing from St. Francis of Assisi Parish in Raleigh, a move that became effective in the summer. That announcement came as a surprise to many in the St. Francis community.

“The fear was that some of the things that made us unique -- the Franciscan charism, welcoming everyone and the solidarity with people in the margins of society -- might become less of a defining characteristic of this parish,” said parish council member Jacob House.

Through much prayer and discernment, Bishop Luis Rafael Zarama asked Monsignor Clay to return to Raleigh to lead St. Francis of Assisi Parish, one of the largest in the diocese, and he agreed.

In his homily, Bishop Luis discussed family and the importance of walking together as a community. He gave thanks for both Monsignor Clay and Father Jairo Maldonado, a first-year priest who will assist the new pastor.

“They are for you, and you are for them, working together as a family to find blessings,” he said.

In the presence of Bishop Luis and the people, Monsignor Clay proclaimed the profession of faith, renewed his oath of fidelity to the Church and signed the official Church documents.

“My priorities will be the issue of evangelization, supporting the diversity of this parish, particularly the needs of our young people who we desperately need to do a better job of preparing them for their life as Catholics, and also to help move this community to a deeper missionary discipleship. I pledge that I will remain faithful to these goals as some of my highest priorities,” Monsignor Clay said.

For his part, House felt the Holy Spirit moving throughout the decision making and the installation day.

“His message was in the same line as what we had discerned through prayer and discussions as a parish council group,” said House. “And that is that people know why we’re here, to be better disciples of Jesus Christ. We are very much aligned with Monsignor Clay in terms of his strengths and passions, and we are very fortunate that he is our new pastor here.”