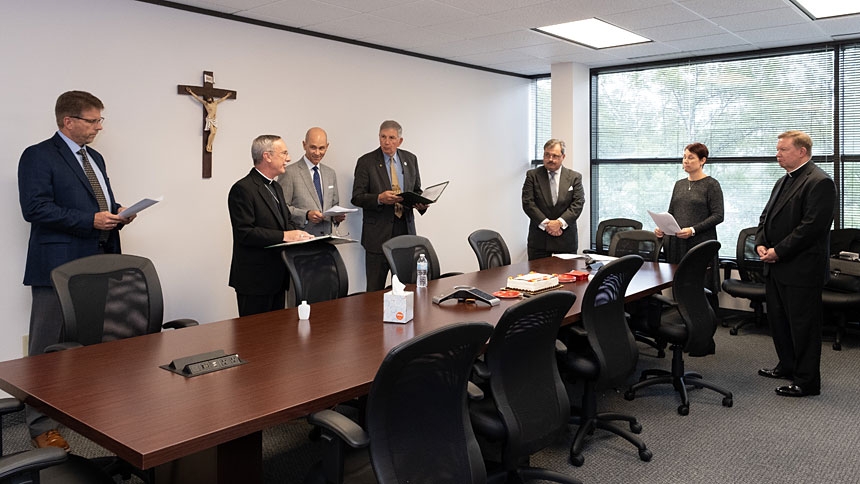 The Foundation of the Roman Catholic Diocese of Raleigh, which was formed in April, appointed Joe Langenderfer as its executive director. Langenderfer is a Certified Fund Raising Executive with a history of deeply engaging in the communities he serves.

His career has been dedicated to Catholic Church advancement. Most recently he worked with the Diocese of Joilet (Illinois) and previously with the Archdiocese of New Orleans (Louisiana), the Diocese of Covington (Kentucky) and the Diocese of Toledo (Ohio.)

Under the leadership of Langenderfer and a lay administrative board, the Foundation will cultivate endowed and major gifts for the long-term benefit of 100 parishes, 29 schools, programs and ministries in the Diocese of Raleigh.

Langenderfer was formally introduced to the diocese in September at a reception following a vespers service at St. Michael the Archangel Church in Cary. And Bishop Luis Rafael Zarama blessed the Foundation’s office Oct. 16.

“The reception to this early work has been tremendous both personally and professionally,” said Langenderfer. “The warm welcome my family and I have received is reflective of not only of the hospitality our region is well noted for but also of the understood need to better serve and steward current and future generations of Catholics.”

The Foundation’s focus on both financial stability and growth will enable diocesan stewardship efforts to better provide focused support directly to local parishes and pastors. The Foundation structure will also allow for a broader range of giving services, including donor advised funds and charitable trusts.

These efforts are part of a broader focus of Bishop Zarama to help the Diocese of Raleigh’s long-term growth keep pace with the rapidly expanding Catholic population in Eastern North Carolina.

The Foundation is located in North Raleigh on Homewood Court. The Diocese of Raleigh’s Parish Stewardship Department, which oversees the Bishop’s Annual Appeal as well as local parish stewardship efforts, and founded on scriptural principles of self-giving, remains located at the Catholic Center on Stonehenge Drive.