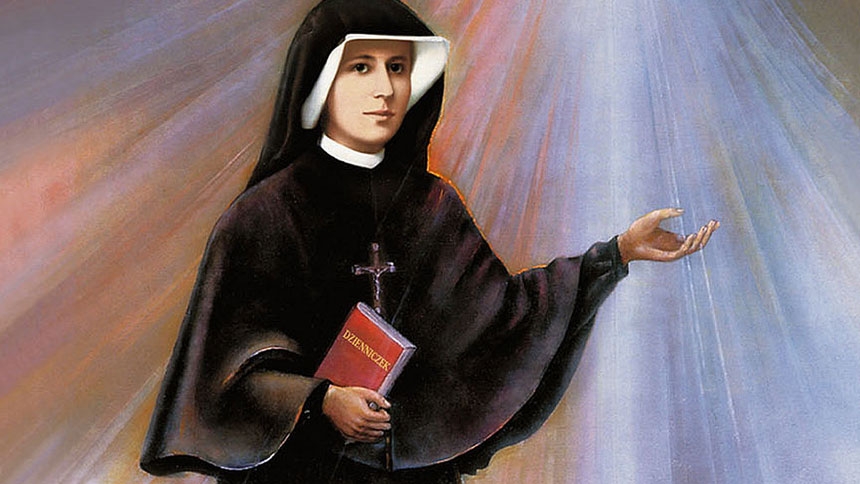 WASHINGTON (CNS) -- A new film on the life of St. Faustina Kowalski, the Polish nun whose visions of Jesus led to the Divine Mercy devotion, will have a one-night-only showing Oct. 28 at about 700 screens across the United States.

The 90-minute movie, "Love and Mercy: Faustina," will also have some features about St. Faustina surrounding it, according to Marian Father Chris Alar, who is seen on-screen during the film.

Shot in Poland, Lithuania, Belarus, Mexico, Colombia and the United States, "Love and Mercy: Faustina" was filmed twice, with the actors speaking in English or Polish, said Father Alar in an Oct. 3 phone interview with Catholic News Service from his native Michigan, where he was giving a retreat. "That makes it fairly unique," he added.

The movie was directed by Michal Kondrat, who may be familiar to some Catholics as the director of "Two Crowns," a 2017 film biography of St. Maximilian Kolbe, a Polish priest who died in a Nazi concentration camp during World War II.

Father Alar said Kondrat had read the diaries of St. Faustina and was interested in developing a film based on the life of another Polish saint.

The filmmaker approached the Marians of the Immaculate Conception -- Poland's first native-founded religious order for men back in 1670 -- which as a congregation has a special devotion to St. Faustina. It was a member of this order who weaved his way through Nazi- and Soviet-occupied Eastern Europe to journey to the United States and spread the word of the nun, for whom he had been her spiritual director.

After some initial storyboards, the Marians brought out a documentary on St. Faustina the congregation had produced in the 1980s, "Divine Mercy: No Escape," to flesh out added details, Father Alar said.

Father Alar called the Divine Mercy devotion "technically, the fastest grassroots movement in the history of the church, and its growth has been phenomenal.

Father Alar wanted to caution potential viewers about one theme the runs through part of "Love and Mercy: Faustina" they may find problematic: the suicide of the painter who, at St. Faustina's direction, painted the image of Jesus with red and white rays emanating from his heart to represent the blood and water that flowed from his side after being pierced in his side during his crucifixion.

The painter, Eugene Kazimierowski, was indeed a Mason, as the film noted, "but he converted" before being called upon to paint the Divine Mercy image, Father Alar told CNS. It is also true that he painted himself as Judas, but " not because he was siding with Judas and wanting to betray Christ, but because he was a sinner and wanted to repent of his sins."

As for the suicide, "what isn't said in the movie, not out of despair or lack of trust in God's mercy (did he kill himself). The Nazis were coming, and he was for sure in an area that the Nazis were occupying and he would have been taken prisoner," Father Alar said. "And he had information about different things that the Nazis knew he knew. He knew for sure he would have been taken, detained and tortured. It's never a good decision to take your life, but one that he did fully and freely of his own free will."

For those who already have Oct. 28 booked, "Love and Mercy: Faustina" will be available on DVD shortly after the one-night-only screening. This could be as early as Oct. 29, but there are still some dubbing issues to be solved, Father Alar said, adding: "We're excited to be a part not only of the production, but also of the distribution."

Find a nearby theater and order tickets.