Music conference in Raleigh brings the solemn, and the informal 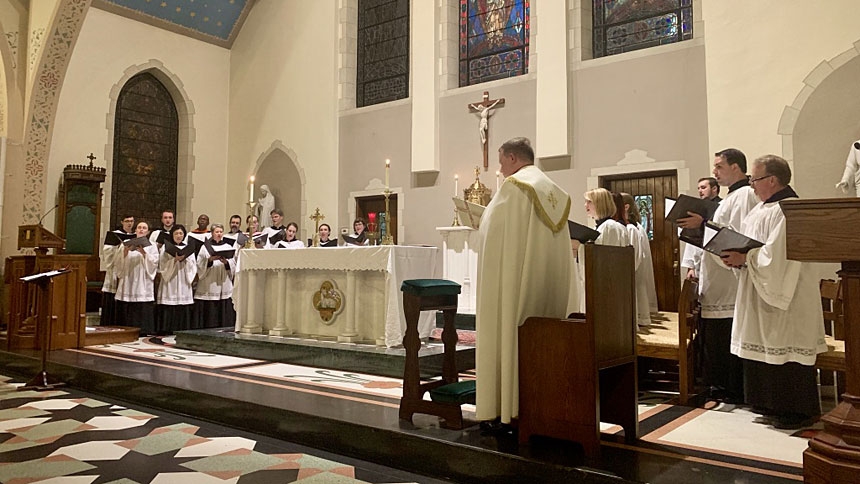 It’s 9 p.m. on Tuesday and almost every pew at Sacred Heart Church, formerly Raleigh’s cathedral, is full. Near the altar, white candles glow and more than 20 choristers – including alto, bass, soprano and tenor – stand in traditional black robes with a short, white cloth covering, often called a cotta.

The musicians, including a piano player in the loft, and the congregation are taking part in something called evensong, which is an evening prayer service with hymns, prayers and readings.

People react differently to the music. Some sport a large smile; others close their eyes and wear a neutral expression. Some lean forward to the edge of their seats. Others nod in approval. After each hymn or prayer sang, there is silence. It’s not because the congregation didn’t enjoy the music – which was shared by professional musicians – but because the event is ceremonial in Christianity and carries centuries-old traditions.

The audience members withhold applause, but show approval with their mobile phones, which are recording parts of the event.

The night was organized by the National Association of Pastoral Musicians, an organization that, according to its website, “is for anyone who recognizes and supports the value of musical liturgy.”

NPM is holding its annual conference in Raleigh this week. Participants from 44 states, Mexico and Canada are attending, according to organizer Jeff Rice.

College students Caelie Flanagan, Juliana Taglione Pollicino and Emma Clive traveled to Raleigh for their first time at the conference, which is now in its 42nd year. Flanagan and Pollicino are co-directors for the choir at Nazareth College’s Catholic Community in Rochester, New York, and Clive is an accompanist.

The three women attended a late-night jam session, which was held at the Raleigh Convention Center July 16, just after evensong concluded.

As musicians played against the backdrop of a large, ceiling-to-floor window showing Raleigh’s street lights, pedestrians and city buses, the women talked about why they attended the conference.

“It’s surpassed what I expected. I am very into social justice and many of the events I attended have that as a focus. We’ve talked about the border situation, clergy sexual abuse crisis, racism and healing,” Pollicino said. “So much of my faith has to do with loving my fellow humans. It’s been really nice to be surrounded by others who feel the same.”

For Flanagan, the group atmosphere is key. “Music is so special,” she said. “It’s about a personal relationship with God, but we sing together. It’s about our relationships with others, too.”

For Clive, some of the highlights were sessions about how to handle burnout and how to write original song lyrics.

“Here, we get to experience people who love God and love music as much as we do,” she said. “The community has been so kind.”

The trio said they have been exposed to newer, more contemporary music that they may bring back to their campus for Mass and other events.

Note: Visit the Diocese of Raleigh’s Facebook page to watch and hear the July 16 evensong.