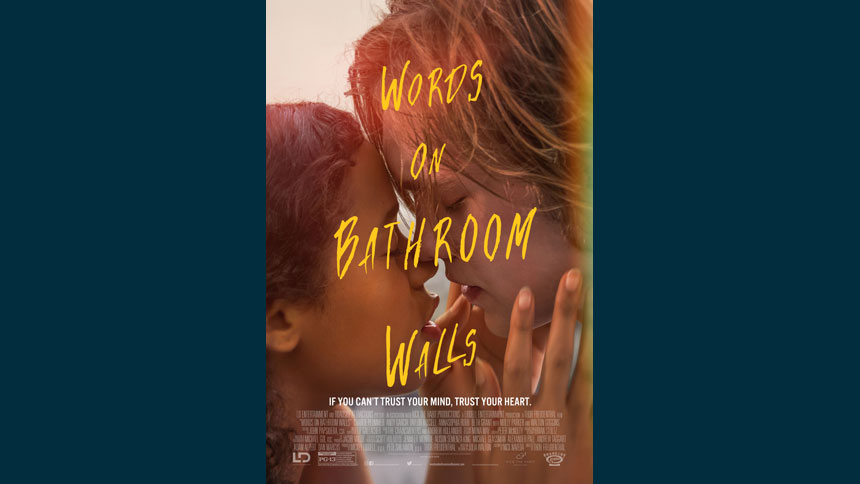 NEW YORK (CNS) — In the case of a physical ailment, distinguishing between the patient and his or her disease is a straightforward matter. That distinction is — or, at least, can be — less clear when it comes to mental illness.

That’s one of the points made in the touching drama “Words on Bathroom Walls” (Roadside), the main character of which, Adam (Charlie Plummer), is a teen suffering from schizophrenia. Adam not only fears that he may have no viable future but that he and his affliction may, in truth, be one.

After a psychotic incident that injures a fellow student at his public high school, Adam is forced to transfer in the middle of his senior year. It’s hardly an ideal situation, and he’s lucky to be given a place at a Catholic academy, St. Agatha’s, though he’s none too pleased with this outcome.

Still, with no better option available, Adam, an aspiring chef whose admission to a culinary arts college is dependent on his graduating, settles down and tries to fit in with his new peers. Among them is the self-proclaimed future valedictorian of her class, Maya (Taylor Russell).

Maya may be intellectually gifted, but she’s also ethically compromised. Adam first meets her when he inadvertently witnesses her secret negotiations with a student to whom she sells completed homework. It’s not long before he offers her an opportunity to earn money more honestly by tutoring him.

As the two bond, Adam predictably fosters the hope of making Maya his girlfriend. Yet he feels compelled to conceal his disorder from her and fears that falling for him might ruin her life.

Adam also has to cope with the effects of his condition on his relationships with his loving, dedicated (but unnamed) mother (Molly Parker) and with her live-in boyfriend, Paul (Walton Goggins). Adam is convinced that Paul wants to send him to an institution and regards his every move with suspicion, seeing Paul as a hostile force in his life.

He struggles with hallucinations, many involving a trio of imaginary personas played by AnnaSophia Robb, Lobo Sebastian and Devon Bostick. And the side effects of an experimental medicine he’s prescribed make him wonder whether the cure isn’t worse than the sickness.

Viewers of faith will appreciate that, along with mom, one of St. Agatha’s chaplains, Father Patrick (Andy Garcia), provides the film with its moral compass. Unflappable, wise, compassionate and ever ready with an apt verse from Scripture, he doesn’t let Adam’s professed atheism stand in his way. He also vindicates the value of confession in a way not often seen in a contemporary mainstream movie.

Those inclined to find fault will note that Father Patrick gives Adam absolution without the latter having confessed to any sins. While the cleric is something of a heroic figure, moreover, St. Agatha’s as a whole is not portrayed in an entirely positive light. Some of the religious details are off as well, as when Father Patrick wears his priestly stole to graduation.

Taking the larger view, Nick Naveda’s script deals with its difficult central topic in a subtle and effective way, partly through the wry outlook Adam adopts in recounting his own travails. And there’s a strong, deftly handled note of reconciliation in the wrap-up.

As a result, some parents of older adolescents may feel comfortable discounting the sprinkling of vulgarity in the dialogue and focusing instead on the movie’s underlying values and humane sensitivity.

The film contains mature themes, including mental illness, cohabitation, sexual references, at least one use each of profane and rough language and several crude terms. The Catholic News Service classification is A-III — adults. The Motion Picture Association rating is PG-13 — parents strongly cautioned. Some material may be inappropriate for children under 13.