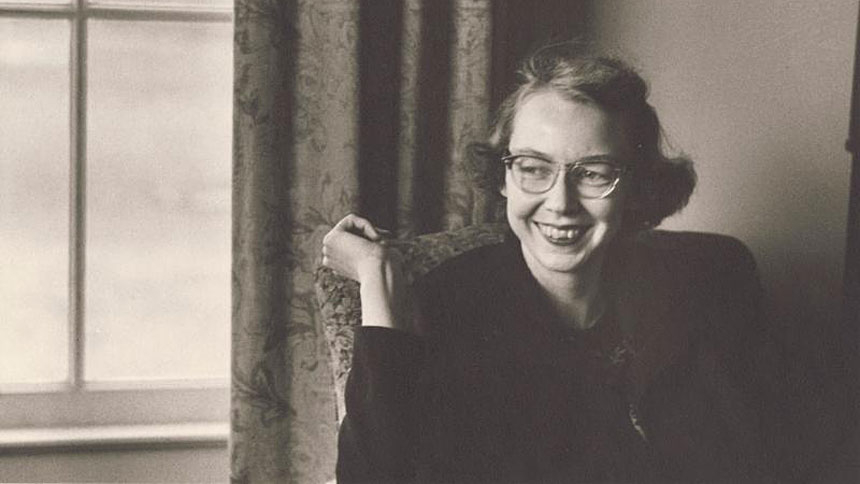 Above: Flannery O'Connor is seen in this undated photo. "Flannery," a documentary about the life and writings of Catholic writer O'Connor, opens in select virtual cinemas nationwide July 17, 2020. The Catholic News Service classification is A-III -- adults. Not rated by the Motion Picture Association. (CNS photo/courtesy 11th Street Lot)

NEW YORK (CNS) -- Despite a tragically brief and illness-plagued career, Catholic author Flannery O'Connor, who died in 1964 aged just 39, is recognized as one of the greatest American writers of the 20th century, excelling especially in her short stories.

Her remarkable life is both recounted and celebrated in the admiring documentary "Flannery" (Long Distance Productions).

"Flannery" may lack the tang of its subject's Southern Gothic novels and tales, meditations on grace recognized and insight achieved by sometimes outlandish characters amid frequently bizarre circumstances. But viewers unfamiliar with her work will be motivated to explore it.

Established fans, for their part, will appreciate the chance to pay an extended visit to Andalusia, the picturesque farm near Milledgeville, Georgia, to which lupus -- the disease that eventually caused her early death -- long confined O'Connor. The simple household seems haunted, in a strangely pleasant way, by her departed spirit.

O'Connor did not write for children, and this profile of her is unsuitable for them as well. Its analysis of one of her tales involving a serial killer and another in which a hermaphrodite plays a central role, for example, suggests a mature audience.

Many parents of older teens, on the other hand, may consider “Flannery” appropriate for them. All the more so since this literary biography is not only educational but spiritually enriching as well.

O'Connor was a dauntless champion of faith who, in her writing, subtly strove to communicate with unbelievers. A daily communicant, she also read a chapter of the Bible and a section of St. Thomas Aquinas' "Summa Theologica" each day.

By all indications, O'Connor patiently accepted the hardships resulting from her malady. Even as her end approached, moreover, she worked on in the hospital to complete her last collection of stories. Her example of religiously inspired courage is well-deserving of the tribute paid to it in this thoroughly enjoyable movie.

For screening information, go to: https://www.flanneryfilm.com/calendar.

The film contains images of violence, references to sexuality and fleeting crass language. The Catholic News Service classification is A-III -- adults. Not rated by the Motion Picture Association.

Mulderig is on the staff of Catholic News Service.